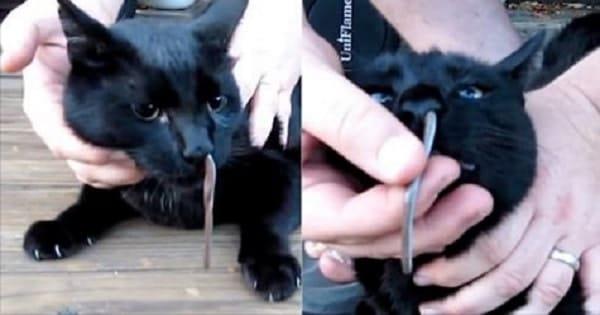 A stomach-churning moment has been caught on video and has been posted online – the very moment a cat owner was forced to pull a small snake out of his pet’s nose. In the footage you are about to see, the mischievous feline, whose name is Marian, is seen with the long creature hanging from its nasal passage.

The cat’s owner, who live in Mendocino County, California, then gently brings the panicked kitty into his arms and swiftly removes the unwanted snake. The cat appears to be perfectly fine after the slithery creature was removed.

He states online: ‘My wife’s ridiculous cat failed at eating her prey. Hopefully, the next time, she won’t forget to chew.

‘A friend of mine was in town for the weekend and helped catch this on video’.

‘That is the snake’s head hanging out. Our best guess is that it tried to get free while she was eating it but only managed to wriggle into her sinuses… and then out her left nostril.’

One viewer commented online: ‘Curiosity may not kill the cat but it sure is making it uncomfortable.’ Another stated: ‘Cats are so silly sometimes. Glad you helped her get it out, though.’