Skin and bones, she had done her best but things were quickly going from bad to worse! 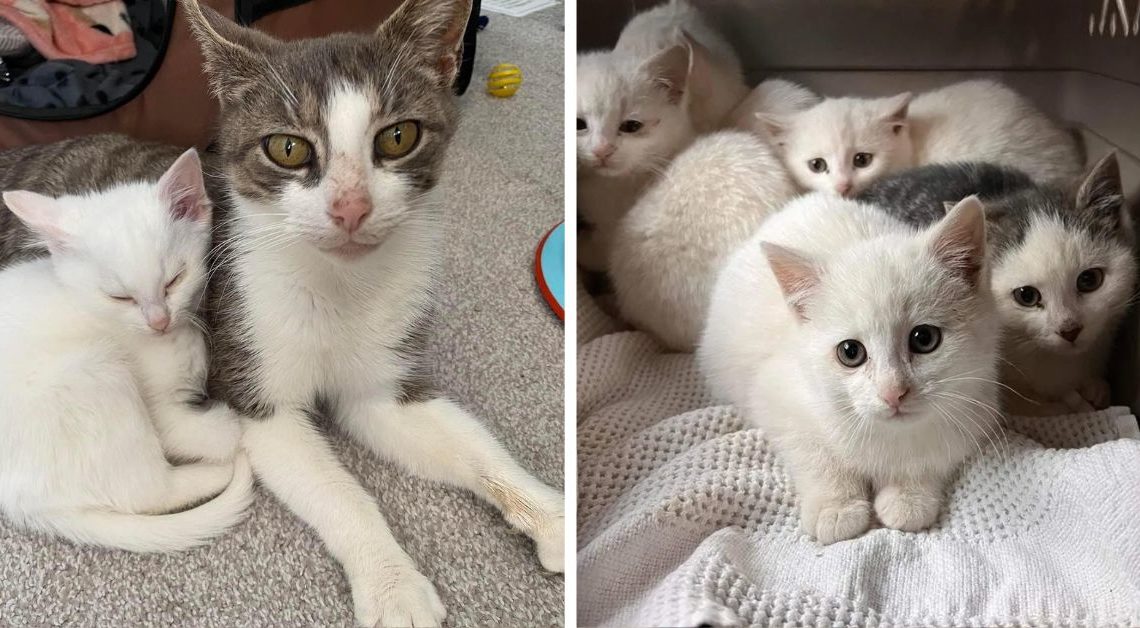 JUST LIKE HUMANS, OR OTHER ANIMALS FOR THAT MATTER, CATS NEED THE GIFT OF TIME TO RECOVER FROM A STRESSFUL EXPERIENCE.
They too need the time to heal, time to recover, hopefully, aided by the kindness of a loving hand, someone who cares.

This was certainly the case for a cat family, a Mom, and her litter of five kittens, who found doing their best to survive behind a warehouse in Ontario, Canada. Cailey Seymor, founder of
Dorset Rescue Kittens found out about the family fairly recently, after they were discovered by a good samaritan early one cold morning. 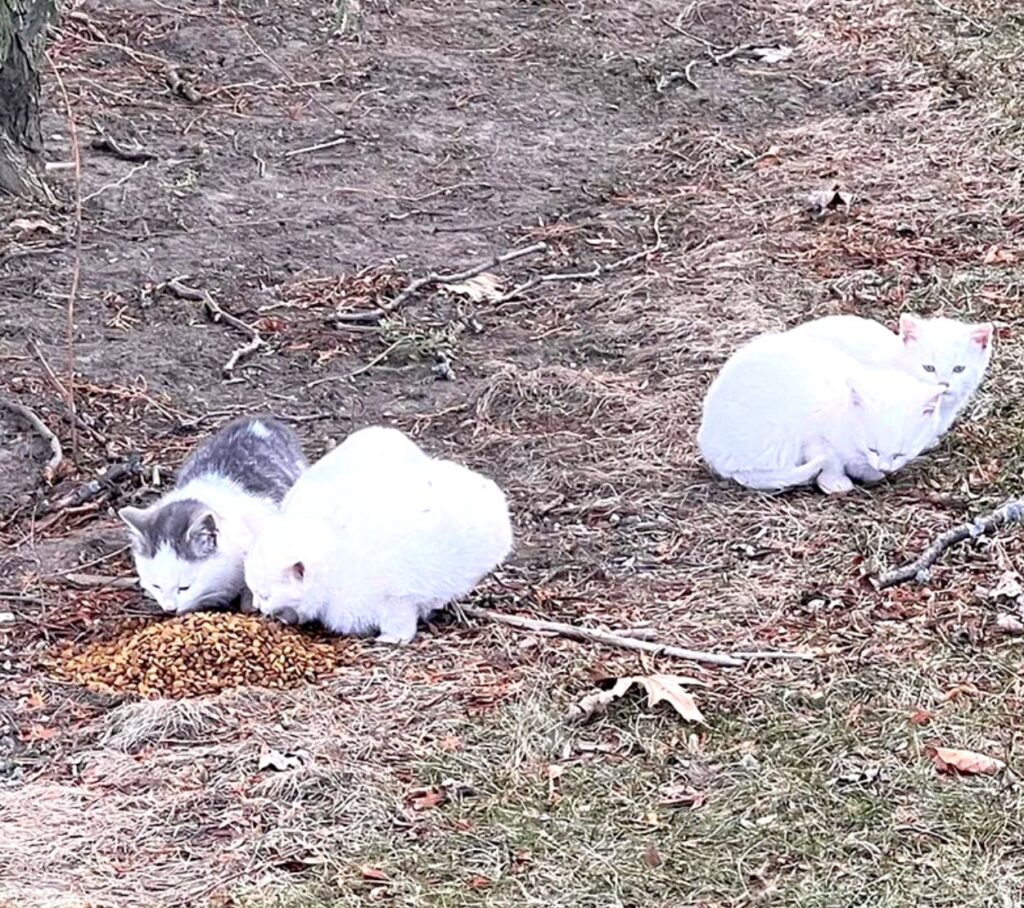 The kind-hearted lady provided the struggling family with a plate of food, delighted to see one and all scampering up to the plate for a meal. From now on they would never have to worry about where their next meal came from. Once they had eaten their fill the woman contacted Cailey.

“She sent me a photo of the kittens asking if we could take them,” Seymour says. “My answer was ‘absolutely.’ She was successful in catching all five kittens and their mom.” 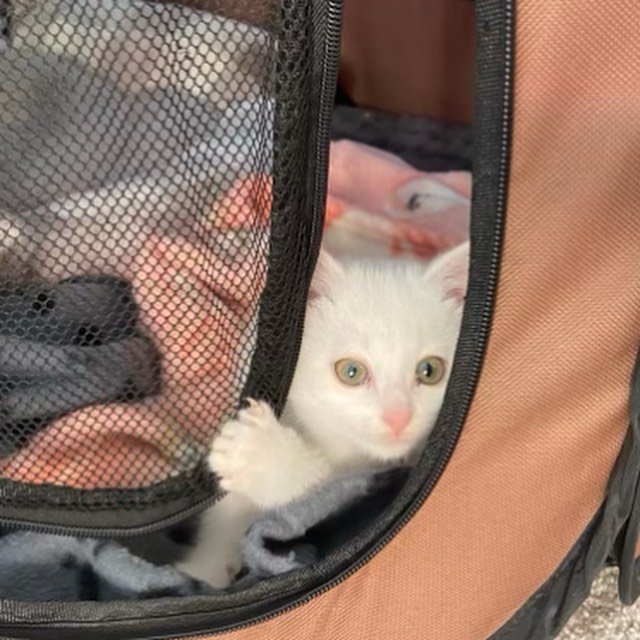 It was clear that life on the streets had not been easy for mom, now named Coco. She was just skin and bones.

“Coco spent her entire life on the streets as far as we know,” Cailey says. “We were worried that she was feral but that couldn’t be further from the truth.” 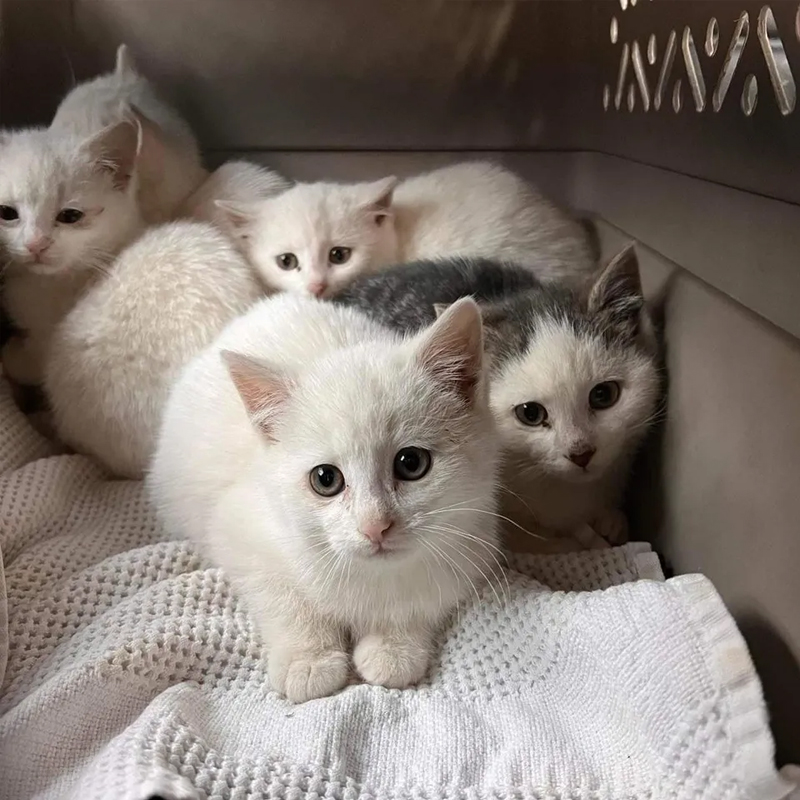 It took Coco a few days to settle into her new home, but once she did she didn’t look back.

“Mama Coco has finally started to understand the concept of a home,” Cailey said. “At first she would only lay on the ground, never on a bed or couch. She loves attention but didn’t know how to seek it out.” 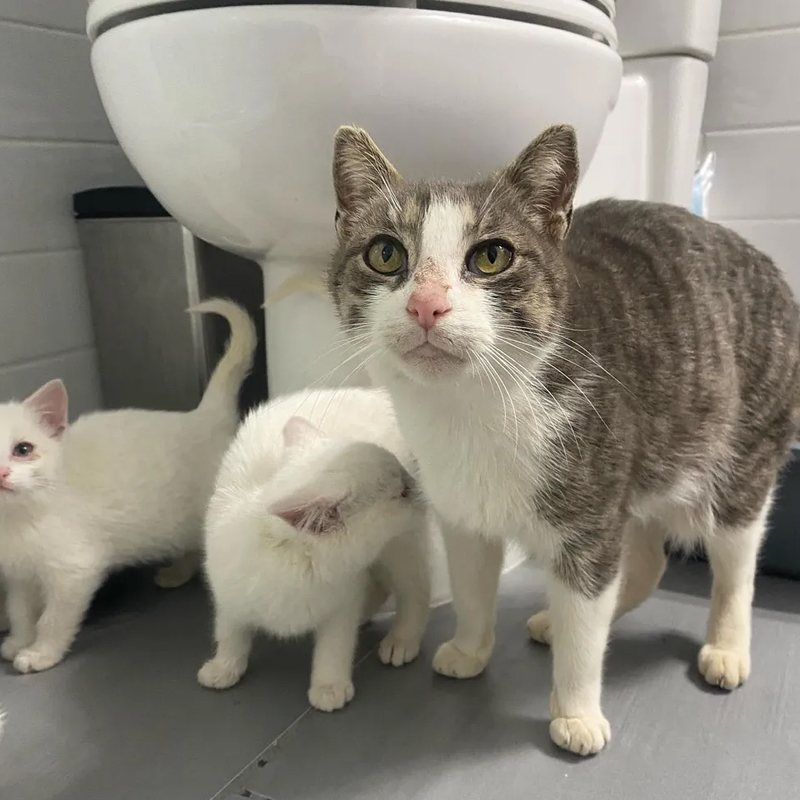 For her, the good news is no more suffering, from now on she will be an indoor cat.

“She now looks for attention, lounges on beds and couches, and you can definitely tell she never wants to go outside again.” 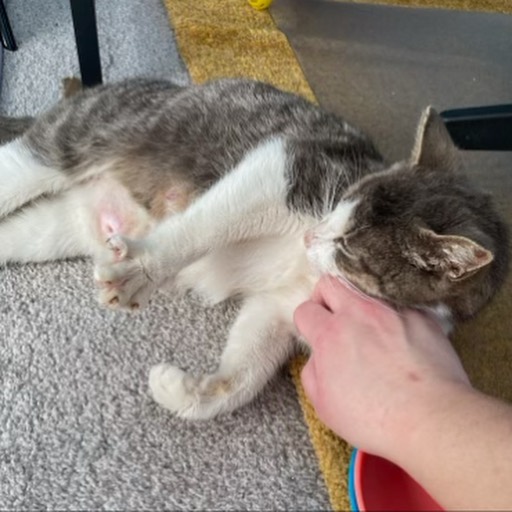 However, right now the entire family was very much in a recovery process. They were all very scrawny and battling upper respiratory infections. They had been virtually clinging onto life outdoors.

“It was apparent that they had been eating leaves and grass since there wasn’t food readily available to them,” Cailey said. 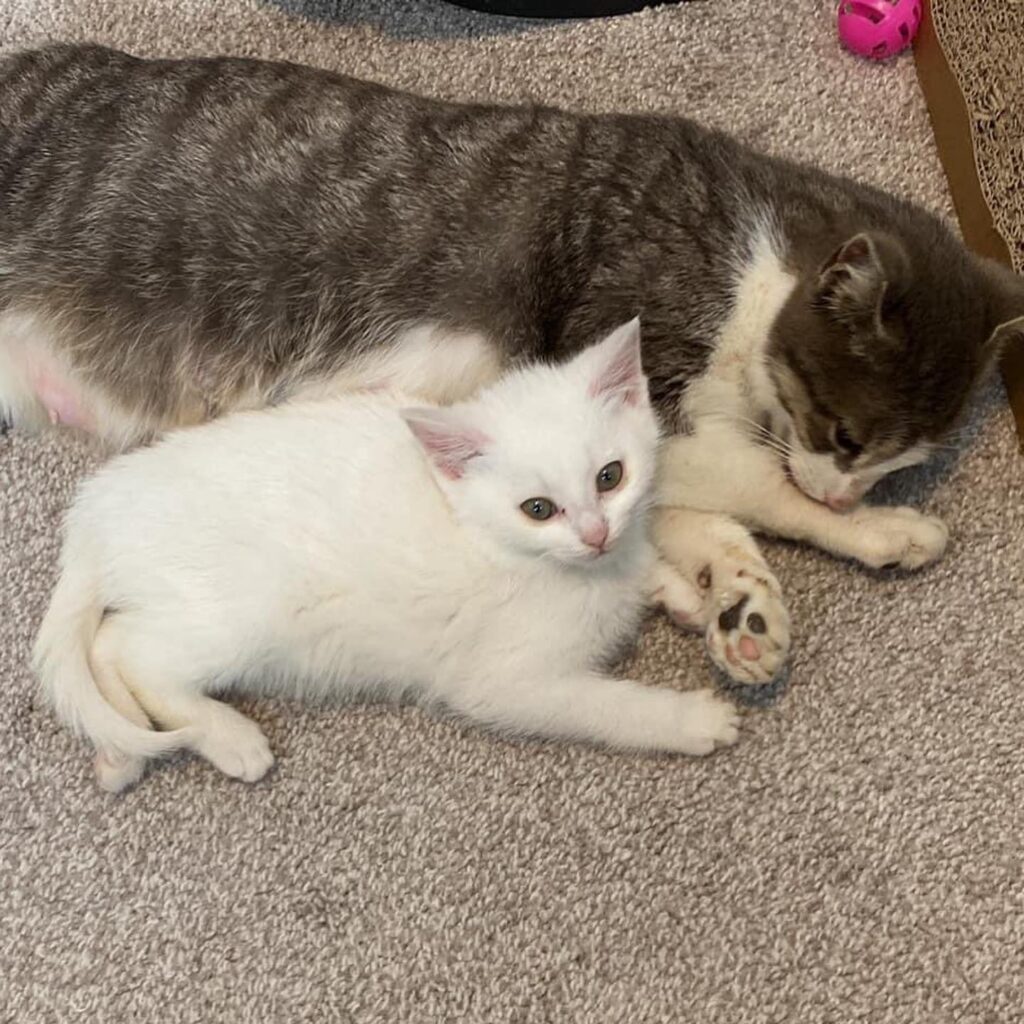 With Cailey’s and momma Coco’s help, the kittens slowly began to turn the corner, while Coco herself was learning for the first time she can love humans.

“She was leaning into love like she had been craving it her entire life,” Cailey said. 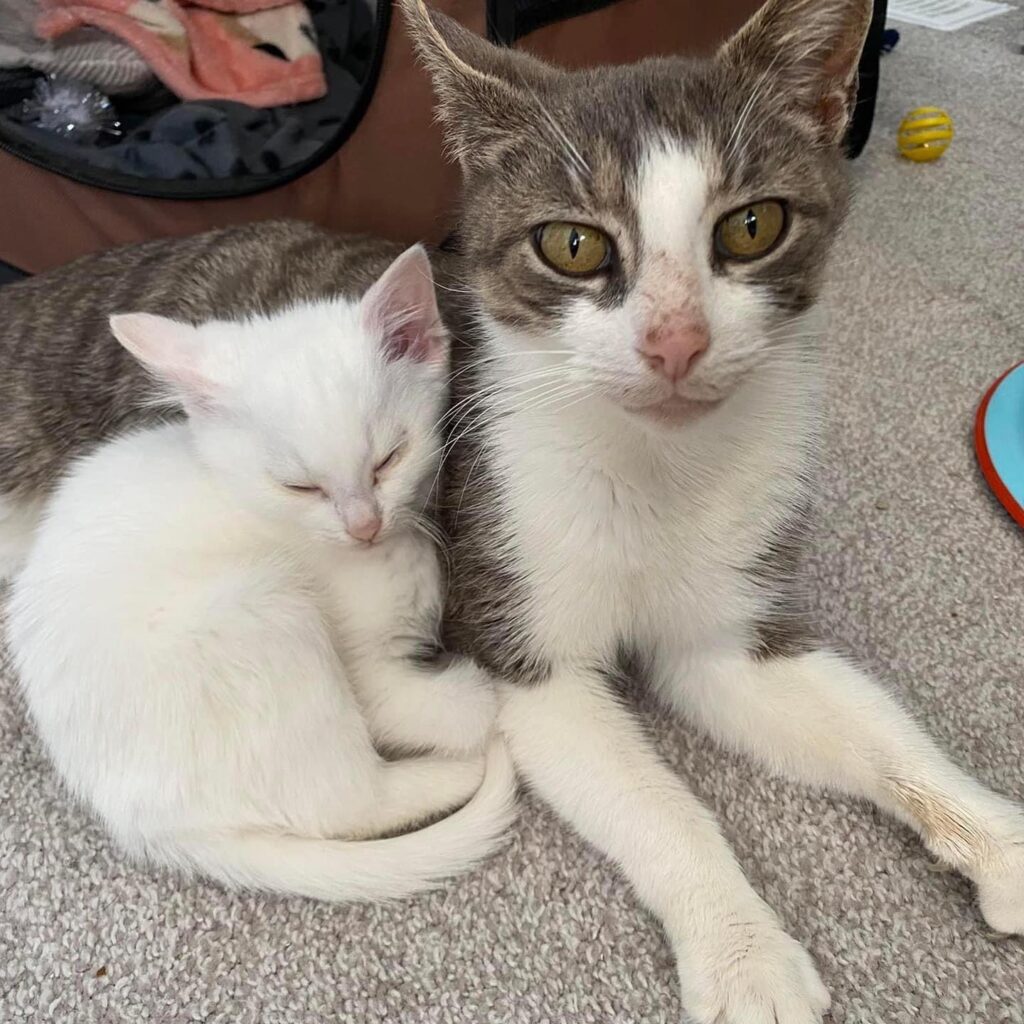 The smallest kitten needed more attention from mom than her siblings did.

“Coco was so skinny I was shocked she even kept the babies alive till eight weeks, which was when we got them,” Cailey added. “We noticed that one of the babies, Chanel, was smaller and quieter than the rest.” 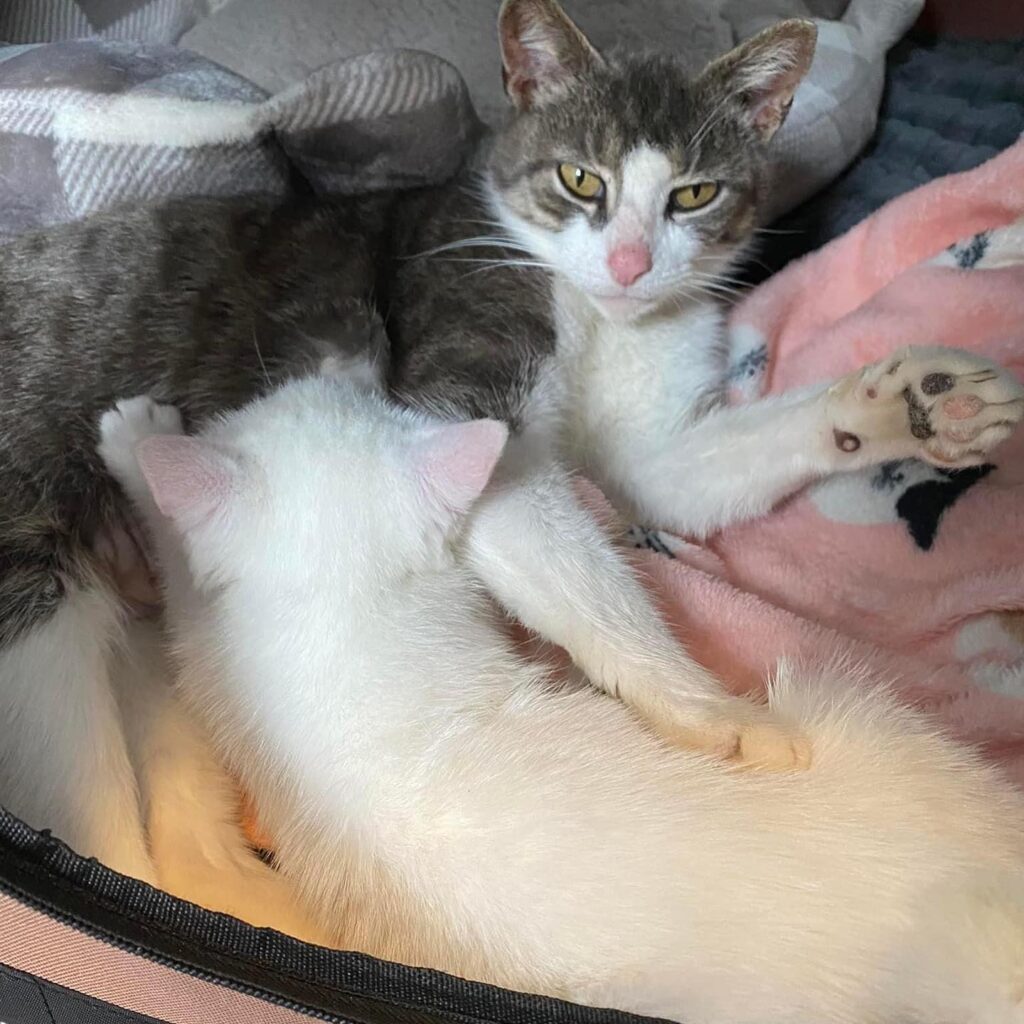 Chanel was nothing more than a tiny white bundle of love. Needing extra time with love, she still clung to mom for attention even after her siblings were weaned.

She still nursed from mom, something which was clearly a great comfort to her. And for Coco herself, she didn’t mind one bit. An unbreakable bond had developed between the pair. 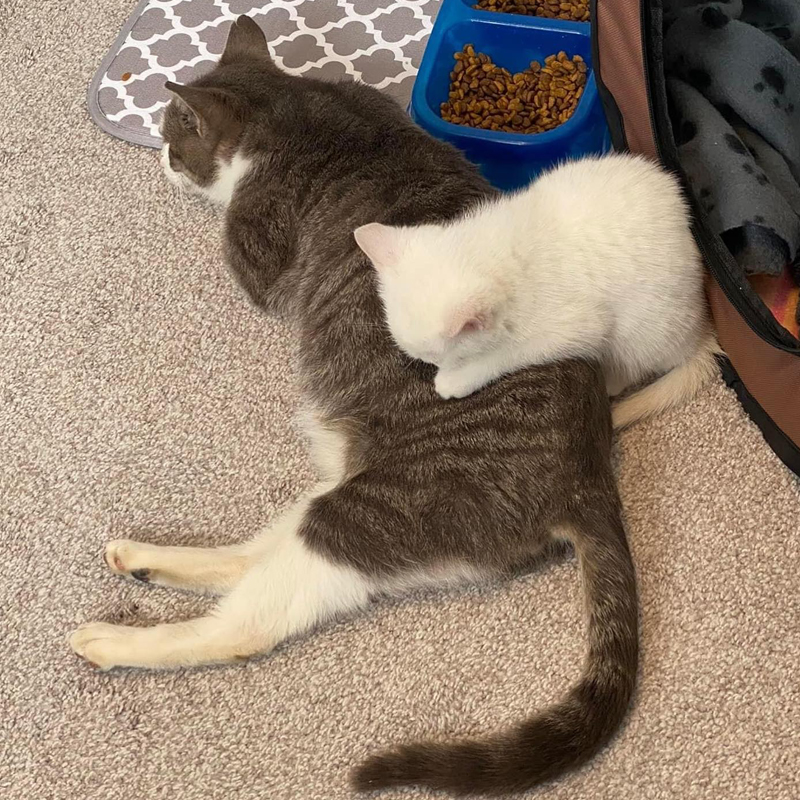 “She’s been a wonderfully attentive mom and dotes on Chanel,” Cailey said. “Chanel is often her mom’s mini shadow, but as she has grown, she has really opened up and has quite the personality.”

Now she has a place of safety from which to raise her kittens Coco has become incredibly relaxed, taking naps were where ever and whenever she wants. 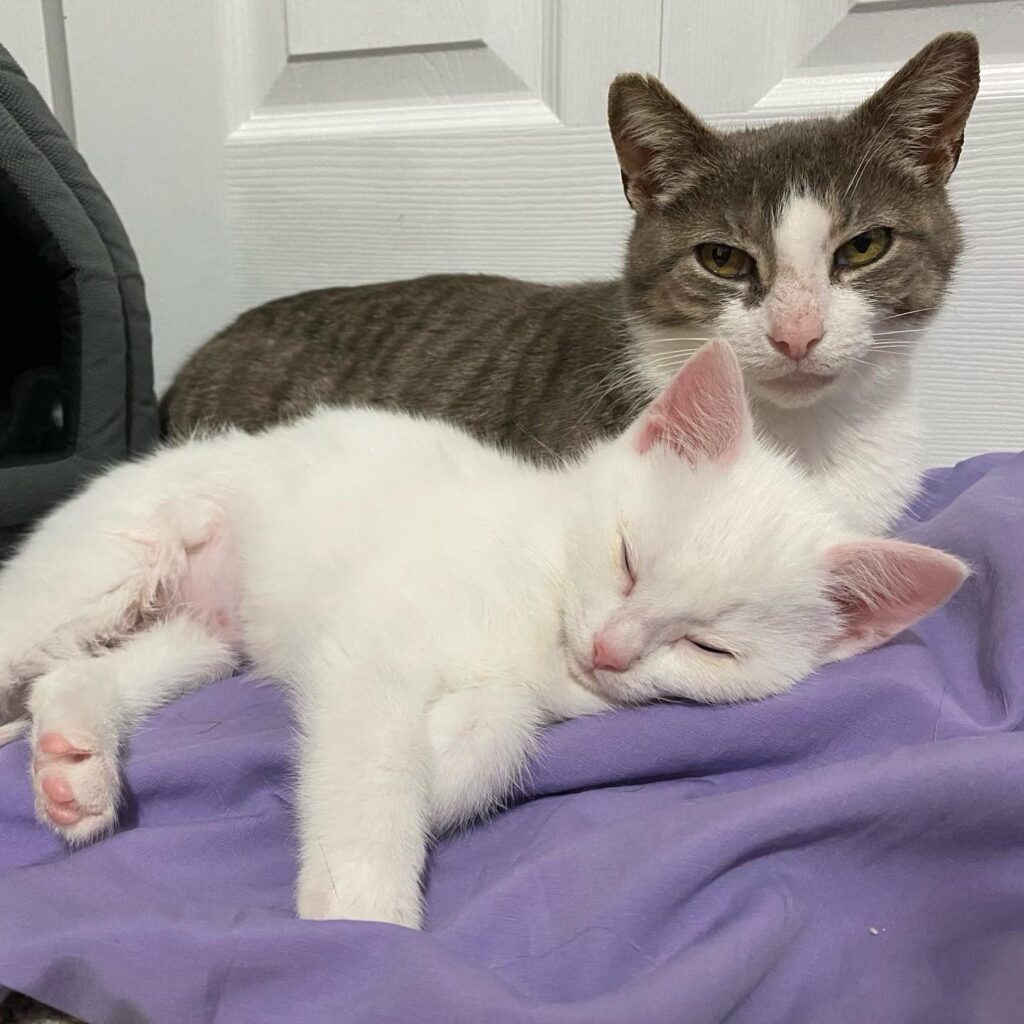 Chanel for her part gradually came out of her shell, transforming into a bundle of energy. Well and truly keeping Coco on her toes.

The bond between the pair continues to grow and deepen on a daily basis with Chanel following her mom about her new home wherever she goes. 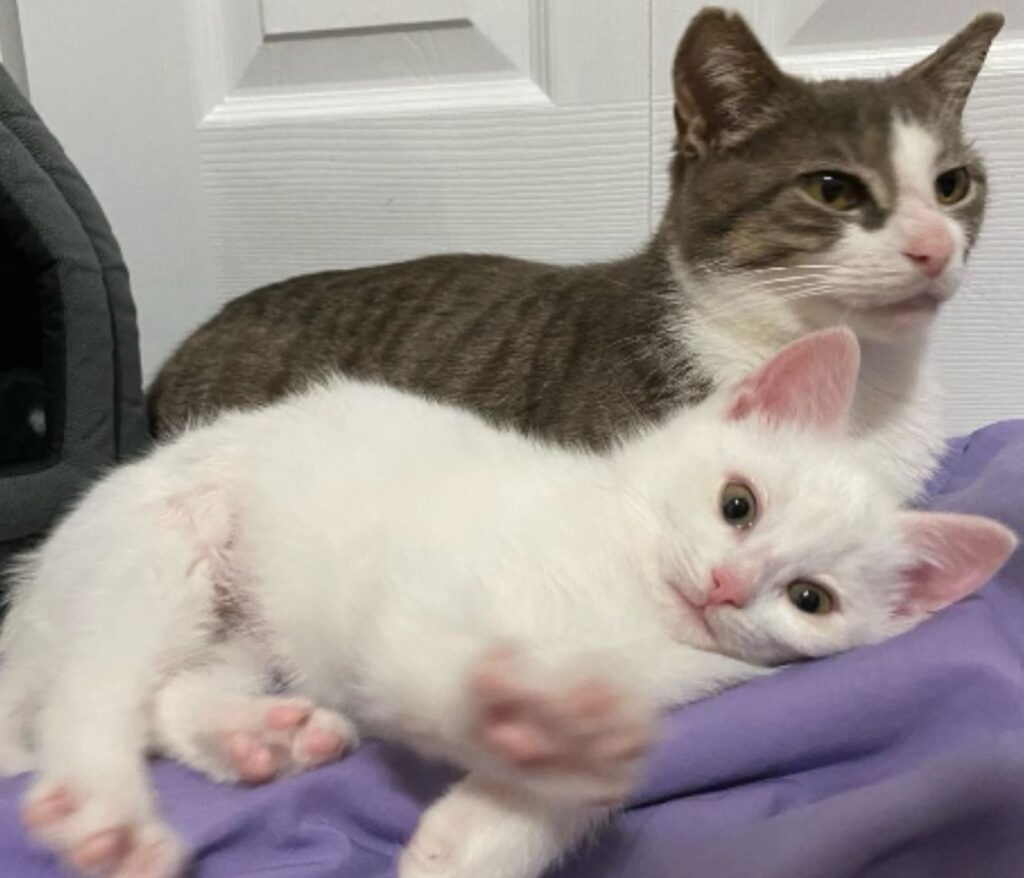 “Coco on the other hand prefers to kick back and relax. She enjoys love from humans, especially a good neck scratch and belly rub.

Not that Chanel allows her to always do this, but tolerant as ever, Coco is extremely patient. 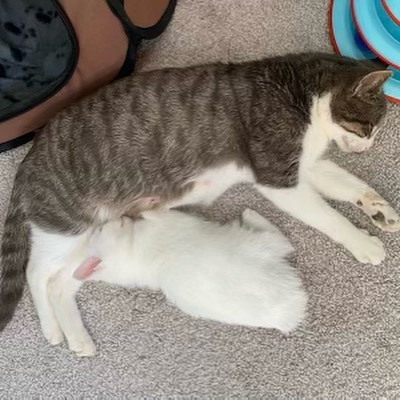 “She’s been a wonderfully attentive mom and dotes on Chanel,”Cailey says. “Chanel is often her mom’s mini shadow, but as she has grown, she has really opened up and has quite the personality.”

“You can always find these two lovelies curled up next to each other or Chanel running about and mama Coco following right hehind.” 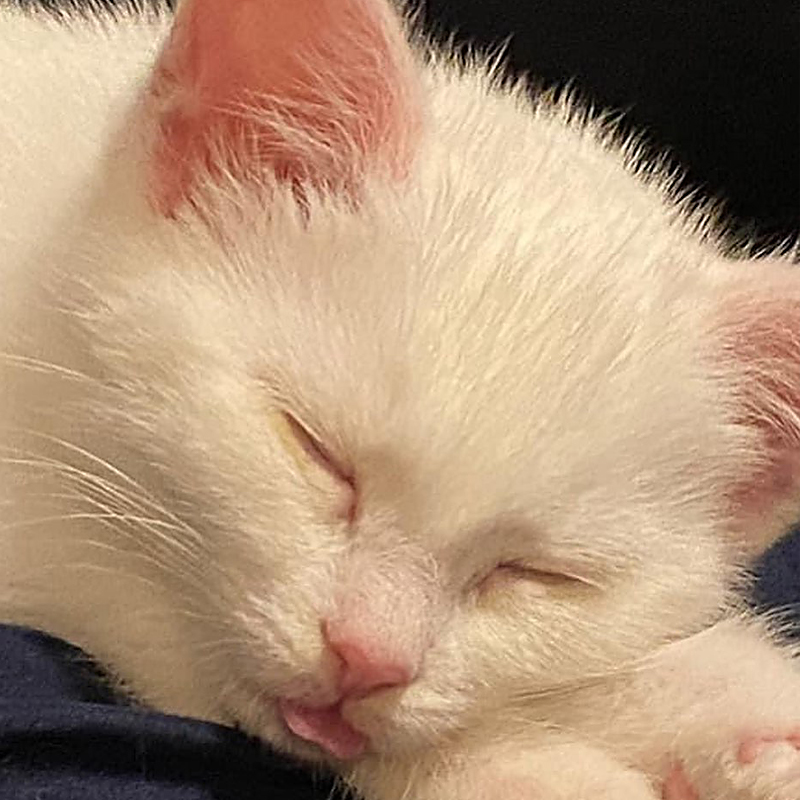 Keep up with all the news on this cat family and Dorset Rescue Kittens here on Facebook and also here on Instagram.

At Only Five Weeks Old, The Vet Told Her To Bring Him Home, Make Him Comfortable, Before Saying Goodbye!

Please SHARE this story with all of your cat-loving friends and family.