‘She was born without hands, feet, or a mouth. We cried all the way through her file.’: Couple pursues special needs adoption, ‘She is truly remarkable’ 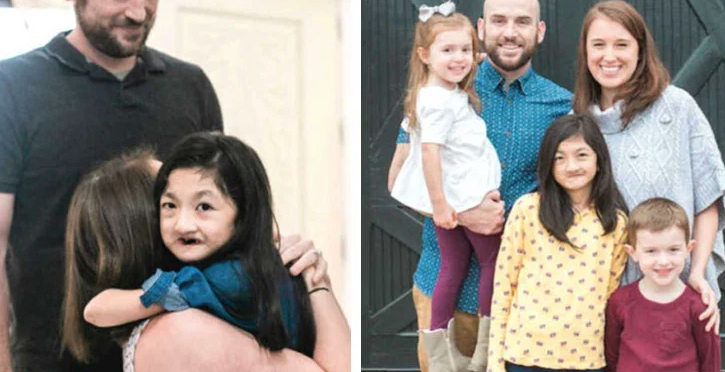 “My husband and I found ourselves in the middle of a major life declutter in the fall of 2016. He had just left his job of four years and took a pay cut to be home with our family more, and we moved from our larger house to a smaller one to pay off some debt. The plan was to allow our responsibilities to recede back a bit and just enjoy a simpler life. And then something remarkable happened. The Lord got our attention.

I can only describe that season of our life in a metaphor. It’s as if we were on the shore of a great ocean. We had both the desire to swim and the desire to stay on the shore but God was calling us to dive in, no conditions, no agenda. It was this odd mix of fear and wonder. Part of us felt like God was preparing us for something big but we also felt afraid because, honestly, we were unsure if we could handle it. In the midst of this, the idea of adoption was growing steadily on our hearts. It was through our restlessness and in our attempts at backing away from the ‘more on our plate’ we found God calling us on an adventure. Strangely, and surprisingly, this stoked a fire in us that we never knew was there. 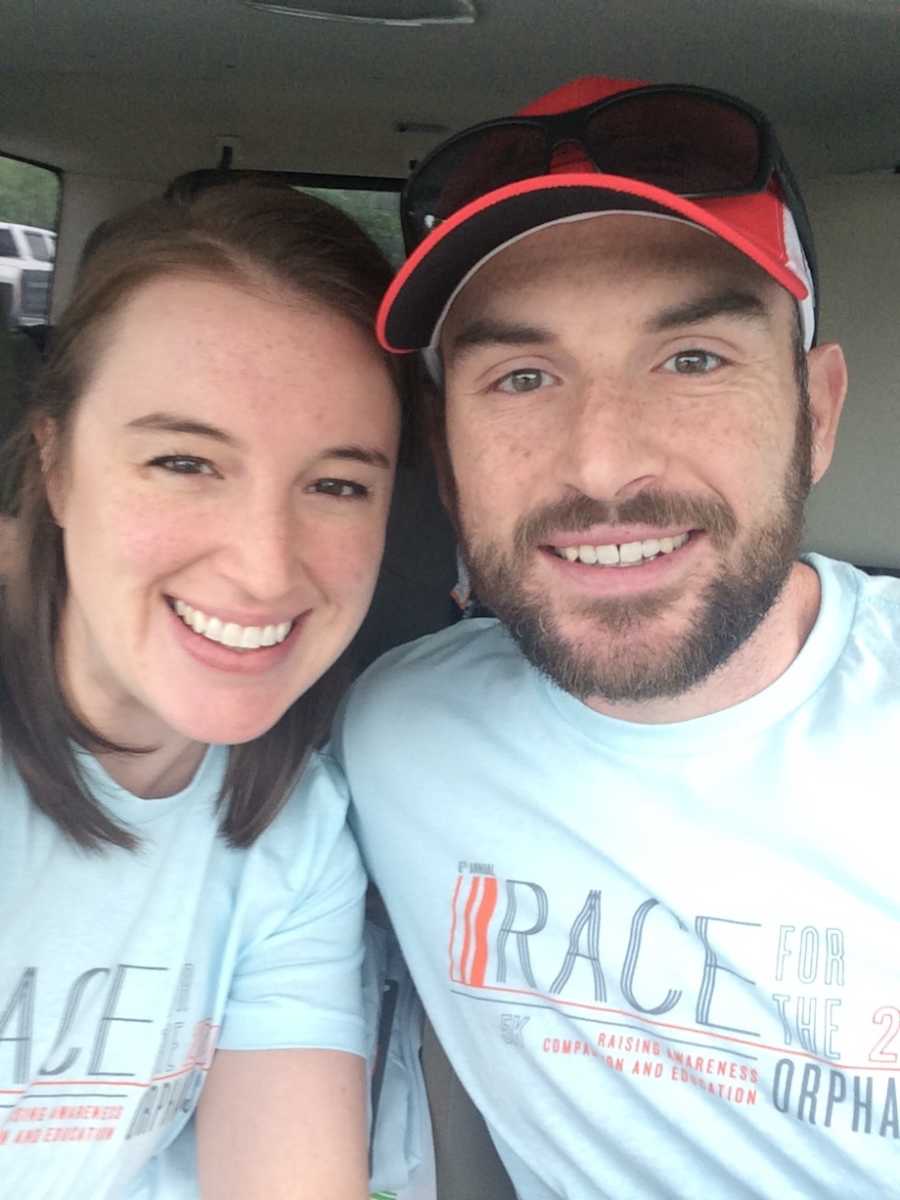 I remember it was a beautiful day in early 2017 when my husband went outside with our two biological kids, who were two and four years old at the time. Something was working in him this day I didn’t fully understand. When he came back inside, he said, ‘Babe, while I was looking at the kids, I feel like the Lord put a question on my heart.’ The question? ‘What if one of your kids was across the world in a destitute condition? What would you do? Wouldn’t you call up every friend you had to try and get someone to her as quickly as possible? You’re my friend, Nick… I’m calling you.’

He couldn’t get the idea out of his head. Through much prayer and many confirmations, we made a $300 sacrifice and applied with an adoption agency, having no idea where the other $30,000 to $40,000 would come from. After signing up for the Philippines program in the late summer of 2017, we began completing our paperwork, training, and home study. Wisdom said to adopt a child younger than your youngest (to keep birth order) and avoid children with special needs because you didn’t want to get in over your head. That kind of logic would be enough for most people but we knew better. 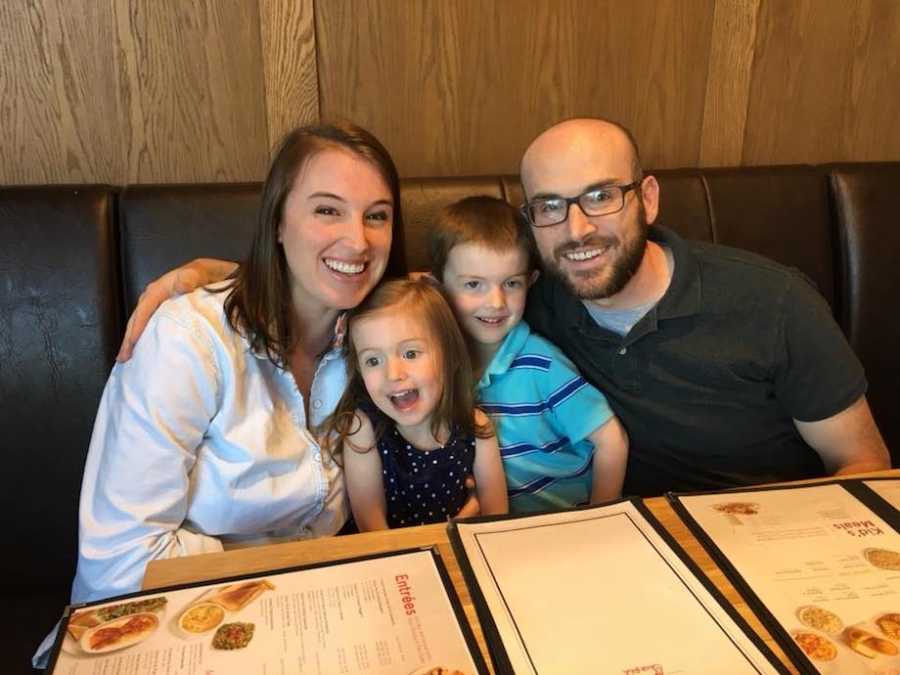 At first, we began to look for a small child who would be younger than our youngest daughter. We knew the process could be a long one, anywhere from 3 to 5 years. One night, the first monthly Special Home Finding list was emailed to us from our agency. This is a list of children who are ‘harder to get adopted.’ Some are older, some are sibling groups, and some have significant special needs. As my husband stared at the computer screen, he was silent. Adopting out of birth order wasn’t just against all the adoption books we had read; it didn’t make any sense at all. But few things that are beautiful do.

Without emotion, he passed the computer to me and simply said, ‘Look at this little 10-year-old girl,’ as if trying to hold something back so my response would be genuine. When my eyes focused on the screen, I saw a small child whose picture somehow made you think more about what she possessed rather than what she lacked. You see, this little girl was born without hands, feet, or a mouth opening but it wasn’t feeling sorry for her that made my heart come alive. It was her joy. 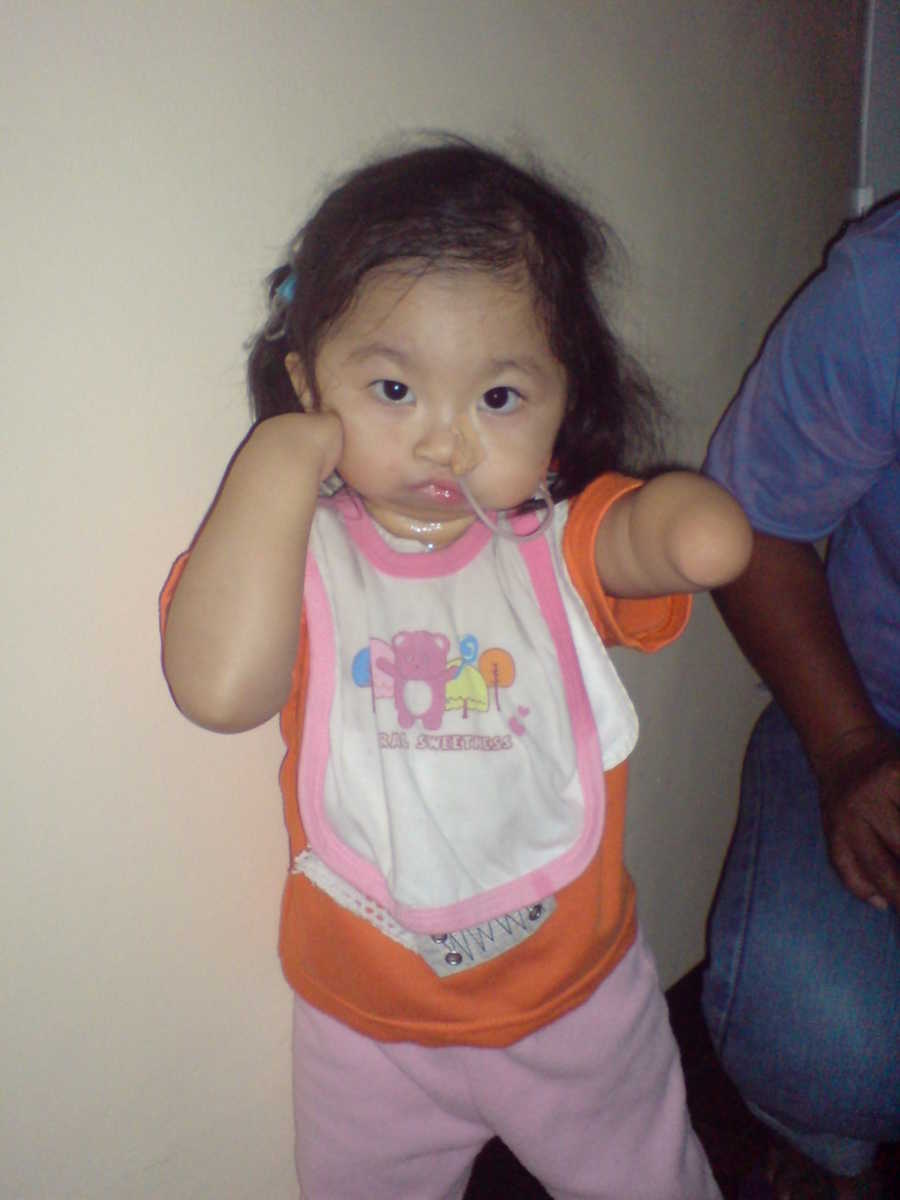 We read her short bio and without even knowing her name, closed the computer, and agreed to inquire about her. There wasn’t a thing more we could do that night but our hearts were ablaze. We knew it, even if our words couldn’t say it. The next day, we asked our agency about our mystery girl. 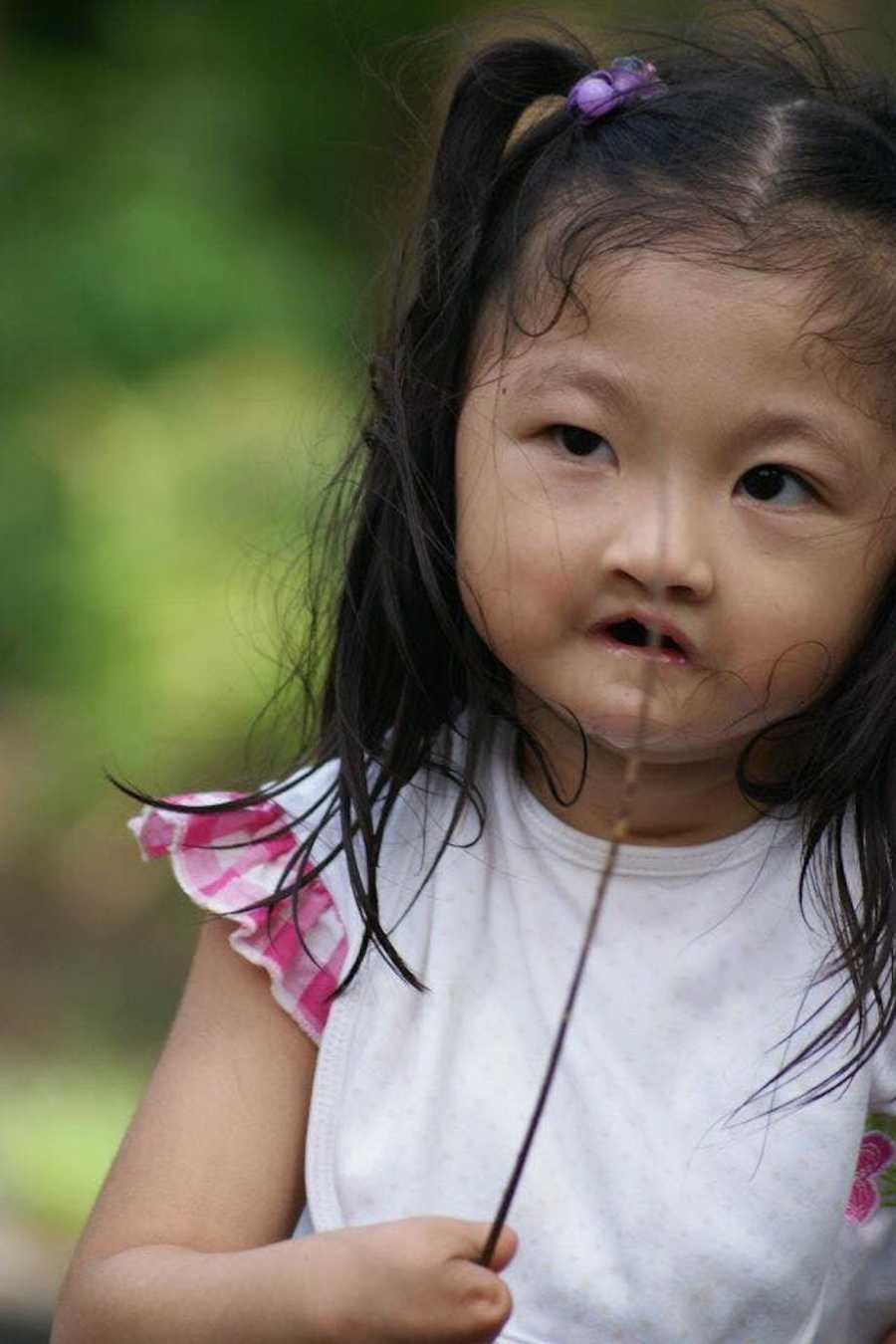 Within a few days after our initial inquiry, her file arrived. It held pages upon pages filled with pictures, details, and medical records. We cried all the way through it. The hand of God in her life was undeniable. Though the long list of medical issues she suffered from would normally scare the daylights out of us, it was met with a surprising peace. God was definitely calling us far out of our comfort zone and providing us with his sweet assurance. Melanie was born without hands, feet, or a mouth opening. Despite all this, she has never had a minute where she didn’t thrive. She has excellent handwriting, can ride a bike (and a horse), and can run, jump, and play as well as any other child. She is truly remarkable. Feeling confident Melanie was meant to be in our family, and despite her being an older child and having special needs, we took a leap of faith and applied to adopt her. It was a long and tedious process of waiting and our family being in hopeful suspension. 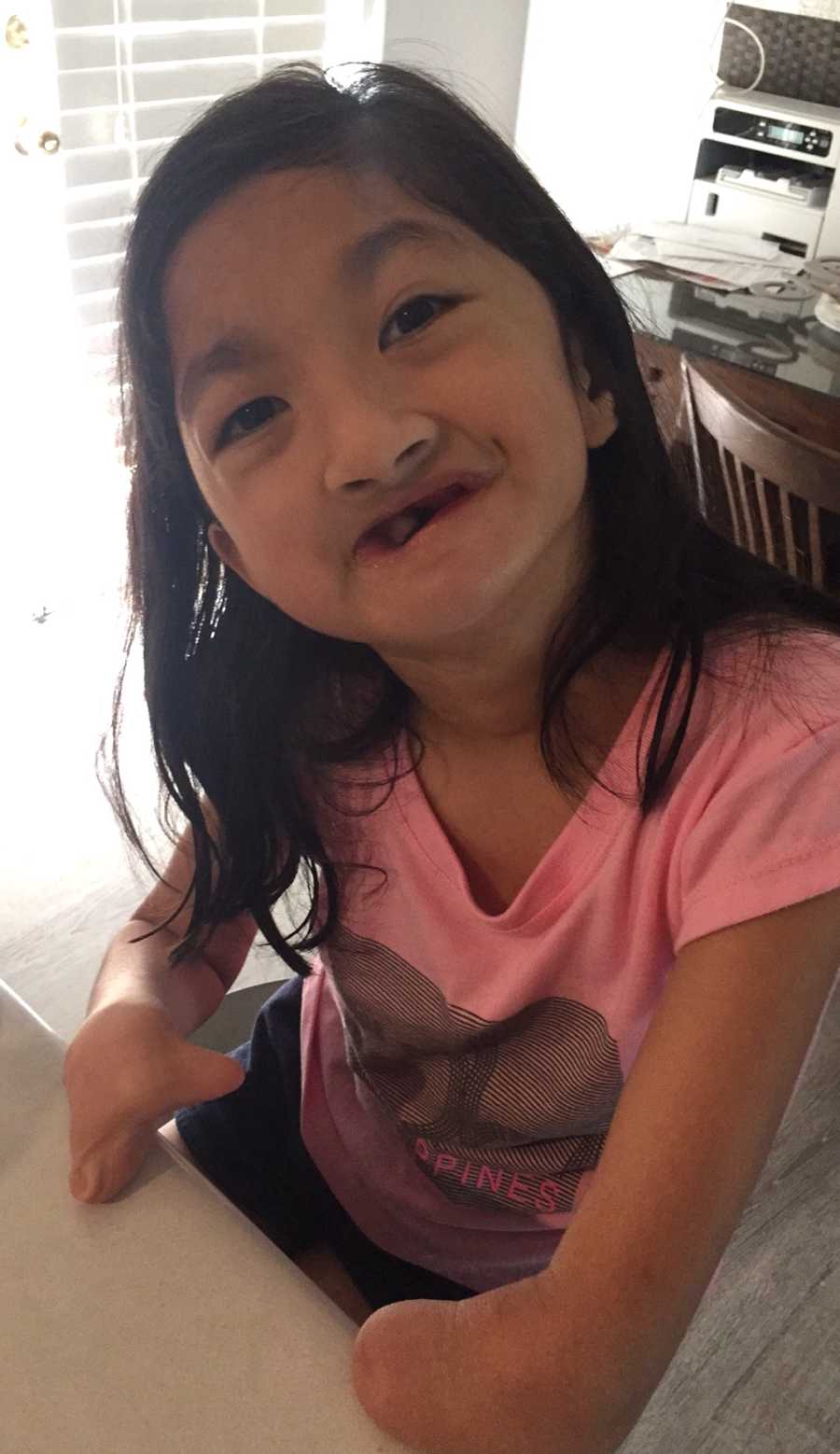 In early 2018, we were officially approved to adopt Melanie. It was an exciting time. People were genuinely happy for us and moved by our story. One of our biggest concerns at the beginning of the process was how we would pay for the adoption fees, which could be as much as $40,000 depending on the circumstances. This was now compounded because we were adopting from the Special Home Finding List and the process was much quicker. What’s interesting is this was probably our greatest concern initially and it ended up being one of the easiest obstacles we faced. We were able to raise the entire amount in about ten months through a combination of charities, donations, and fundraising. This freed us up to focus the remaining time until travel on preparing ourselves and our kids mentally, emotionally, and spiritually for our imminent addition. 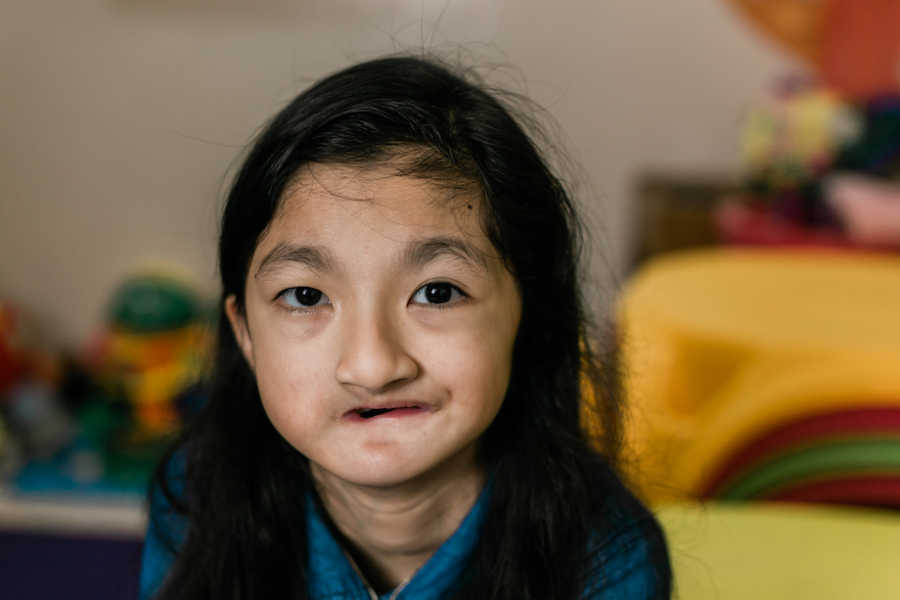 We traveled in August of 2018, by way of South Korea, to the diverse and congested city of Manila, Philippines. I remember getting on the shuttle at the airport to travel to our hotel and being in shock. I saw children not much older than our son begging for money, barefoot, in pouring down rain in the middle of the road. To combat this horror, I remember the vibrant culture and hospitality of the Filipino people, always honoring you with every encounter. It was a polarizing country, but what country isn’t? I thought deeply about what our new daughter’s life would have looked like without the wonderful ministry she had been a part of since birth. 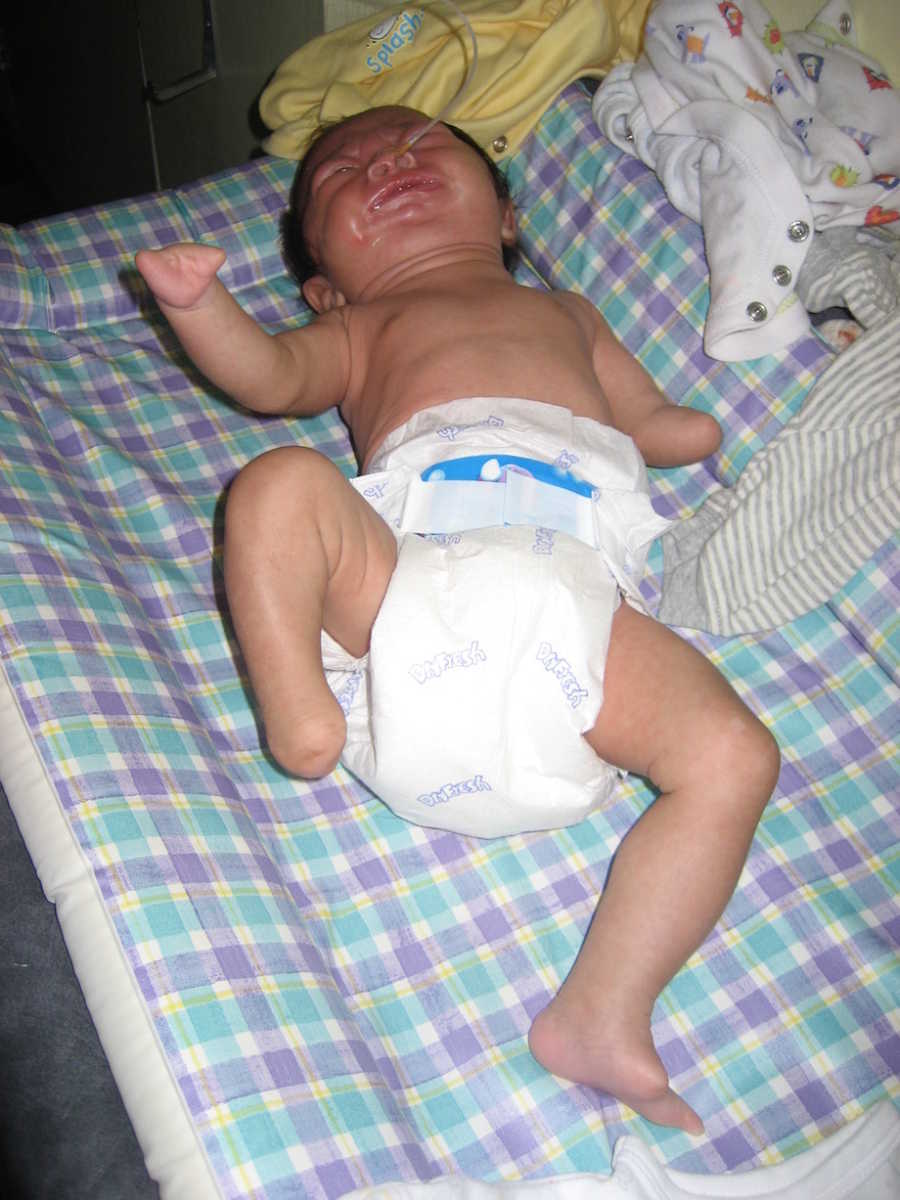 Perhaps she’d be like one of these street children, or worse. Melanie was in the care of a ministry called Helping Hands Healing Hearts. This ministry was all Melanie had ever known. She had been given little chance of survival when she was born and was turned over to the staff, who were willing to love and care for her for as long as she had. The plan was palliative care at first but Melanie just wouldn’t give up. She’s a little fighter! Almost eleven years and multiple surgeries later, there she was, preparing to leave all she knew behind to start a new life. 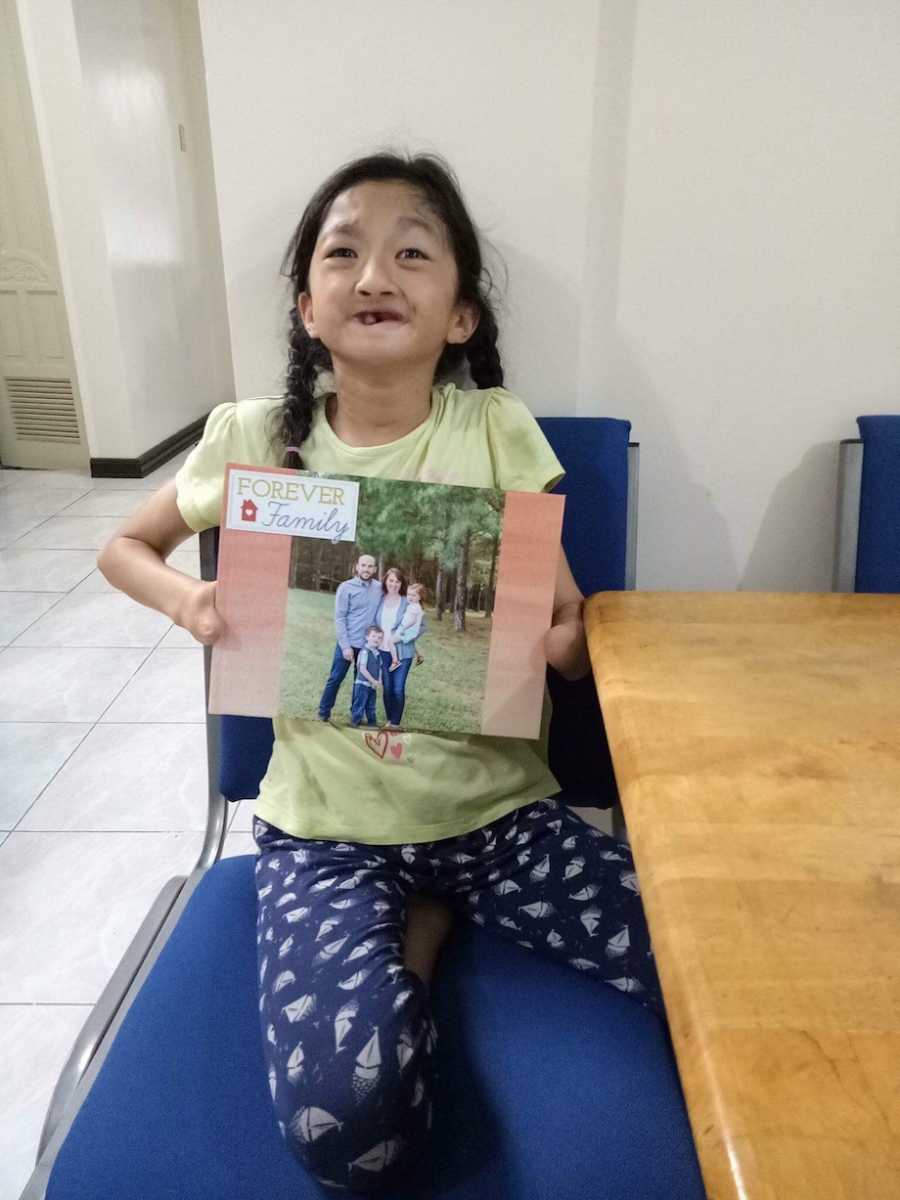 It’s funny, we often think of how brave families are who adopt but what about children who want to be adopted? Especially children like Melanie who are older. The drive from Manila to Olongapo was long and exacerbated, due to our growing anticipation. There is nothing quite like the anticipation and nervousness that comes over you right before meeting your preteen daughter for the first time. Soon we were passing the narrow broken streets of Olongapo, taking in the sights of the little shanties nearby. We were now minutes away from meeting our little girl. As we pulled into the small compound, I remember noticing the steady drizzle of rain, upon the roof as we entered.
‘We’re here.’ We got out of the car and were escorted into a small room. Then, as if she’d always known who we were, Melanie confidently walked down the stairs with a big grin on her face. I probably looked sad (though I was completely overjoyed), as the tears ran down my face and the emotion of the moment overwhelmed me. That first hug was a statement, a message, and a relief all in one. It felt like an exhale. ‘Finally…. family.’ 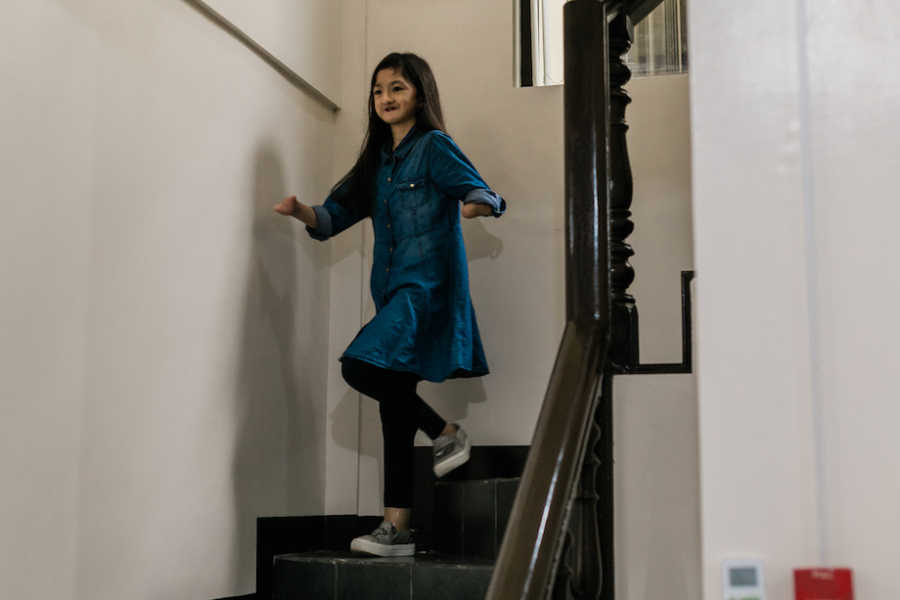 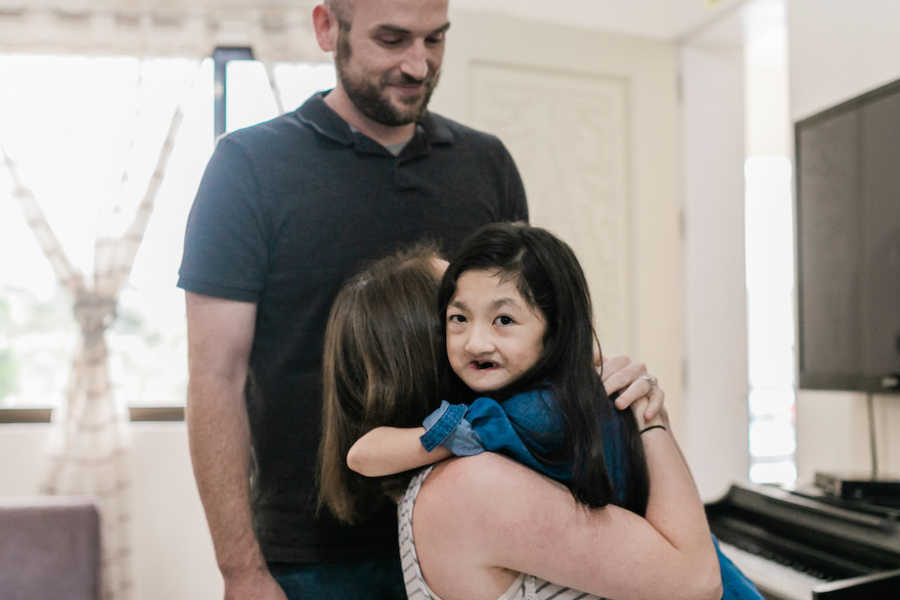 Over the next few days, we did simple activities to bond with Melanie, meet her previous caregivers, and finalize the entrustment. It was a happy time but the kind you’d barely remember if you didn’t take pictures. We were caught up in the newness of it all and it was beautiful. Claire, the ministry leader, told us Melanie had won an art competition when she was a few years younger. The theme for the competition was ‘Love Makes Whole.’ The competition was for children with special needs and she said most kids in the competition painted something reflecting how they wanted their bodies to be whole. Not Melanie though. She painted a family. The judges asked her why she painted a family and Melanie replied, ‘That’s my forever family. That’s what will make me whole.’ 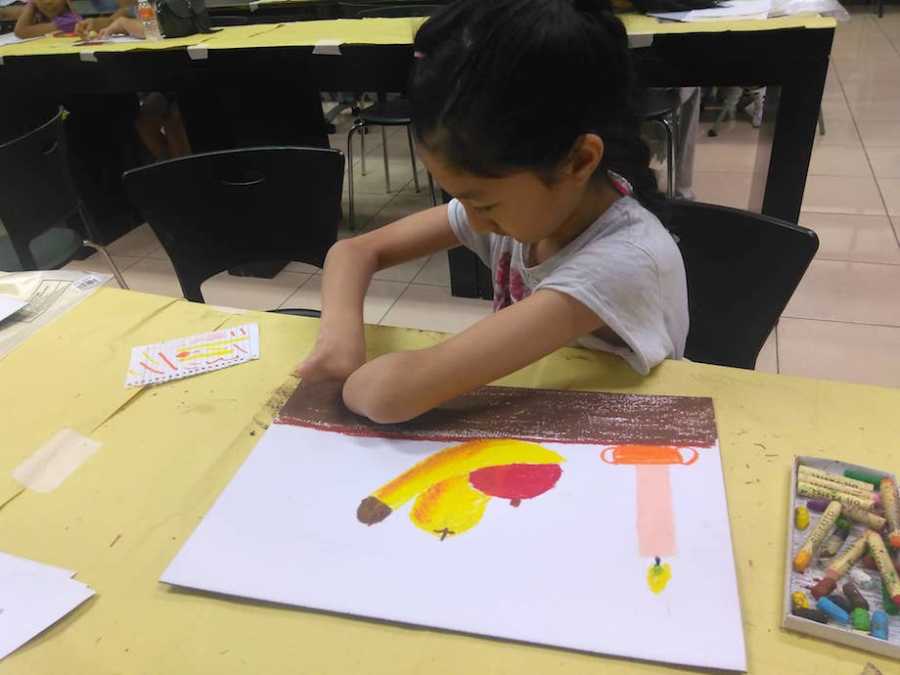 After staying at the ministry for a few more days and having a going away party for Melanie, the staff prayed for us and sent us on our way back to Manila. In Manila, we went to one of Asia’s biggest malls, the Mega Mall, and visited the Intercountry Adoption Board before flying home. We just focused on getting to know Melanie. Melanie attached right away to my husband’s silly and playful side, and I just knew they were going to be buddies. 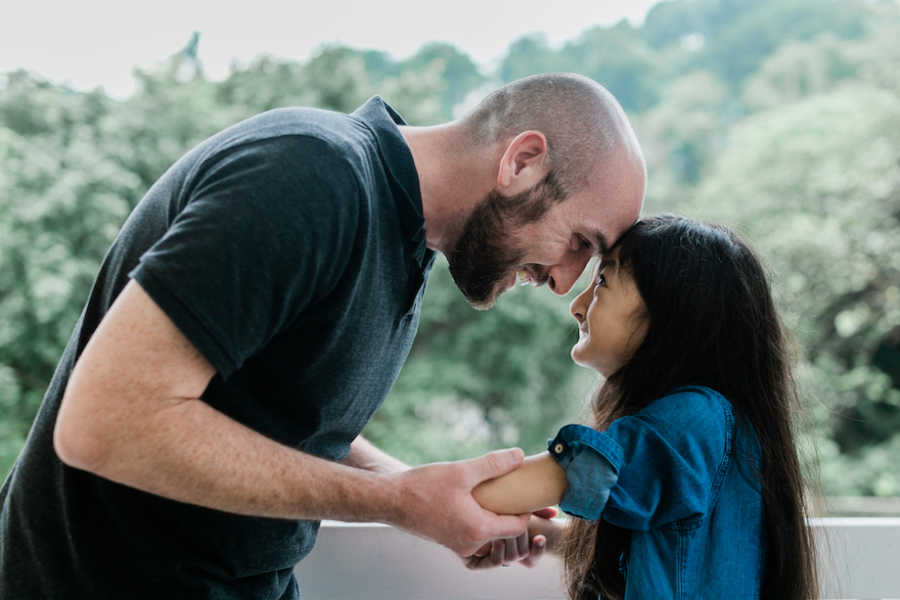 Melanie also seemed to have no problem calling us Mommy and Daddy right away, which surprised us but also made us happy. After flying home, we reunited with our two youngest kids and started building our new life. 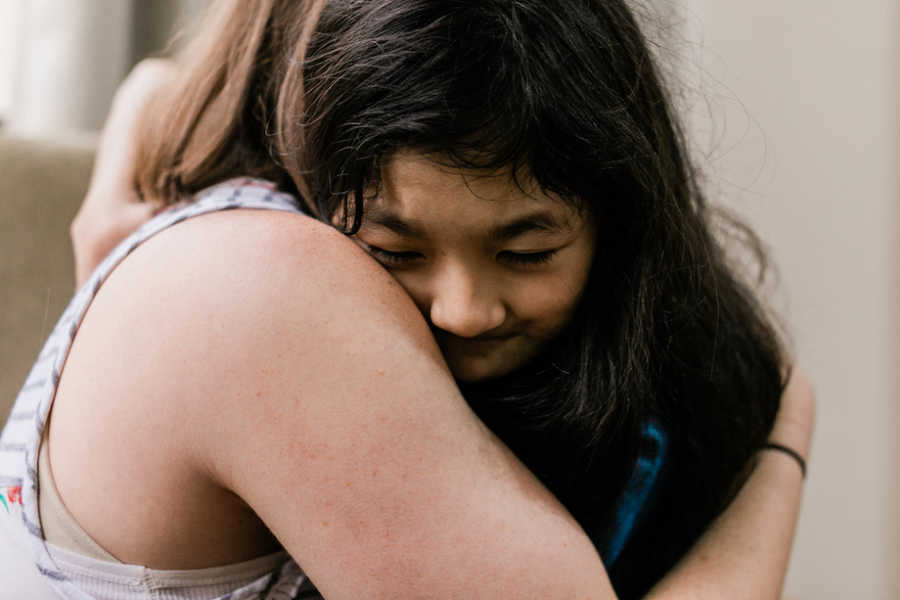 Since bringing Melanie home, she has changed so much. She has grown more confident, grown taller, and her accent has even changed. She has thrived in our church community, her school, and in our family. She is a wonderful big sister and an amazing daughter. Surprisingly, her medical care has been minimal since coming home. She has gotten a new prosthetic and had surgery on her jaw and mouth in June of 2020. We could not be more grateful to God for leading us out into the deep, past our comfort zone, and allowing us to call this precious girl our daughter.”
This story was submitted to Love What Matters by Kate Hayes. You can follow their journey on YouTube, Instagram, and Facebook. 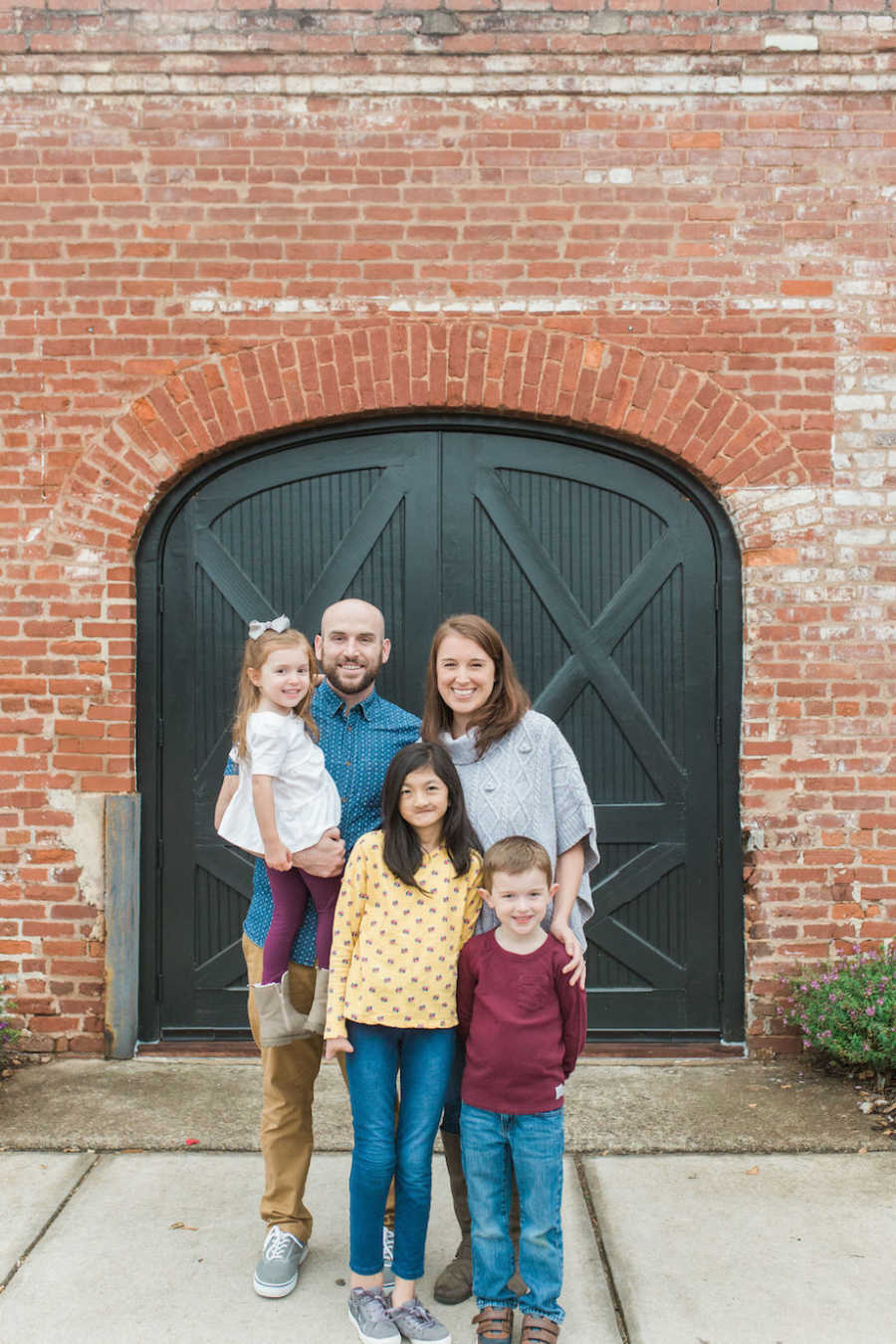 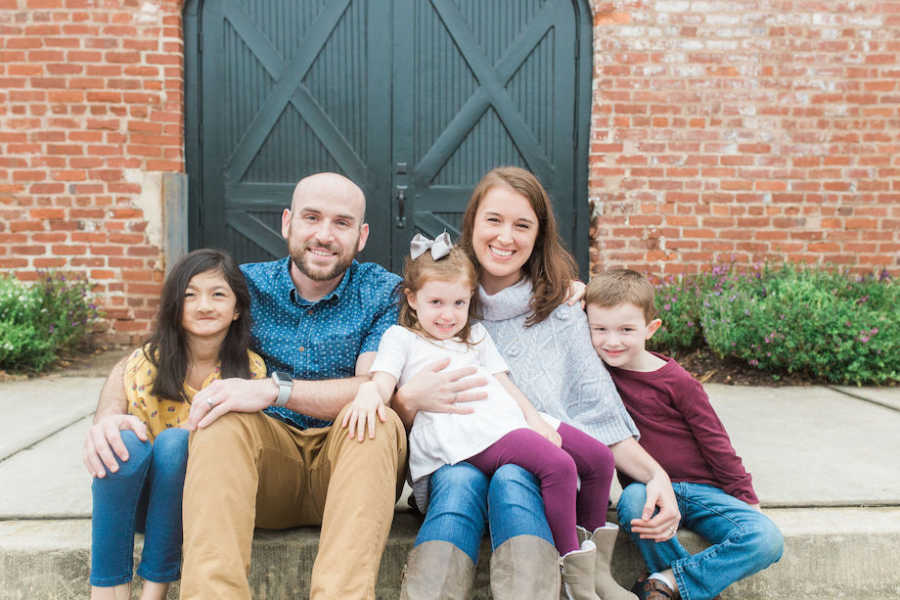