Dog helps pregnant cat deliver her kittens. It is so beautiful to watch 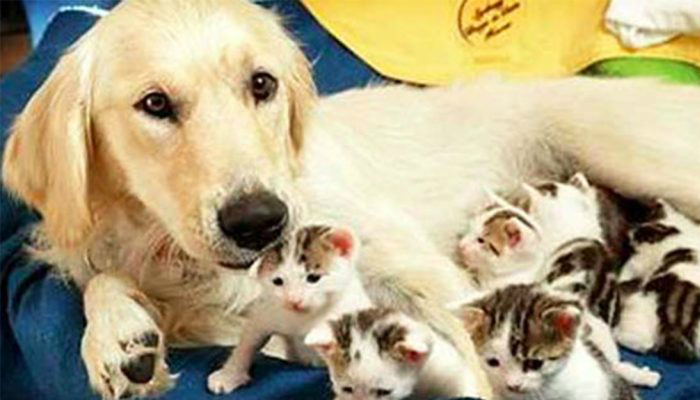 Cats and dogs are said to be the biggest enemies. They do have drastically different personalities, so it’s no surprise if they don’t get along too well. For instance, dogs are always outgoing and eager to please their owners.

They are always willing to obey their owner’s commands and follow their directions. Cats, on the other hand, are very independent. They take a very casual approach when it comes to obeying their owners. To be quite frank, some of the time they really don’t care at all! But time and again, cats and dogs have proved that they can get along really well. They defy all logic and sometimes they set aside their differences to just enjoy each other’s company.

If they are raised together from a young age, or if an older dog or cat is taught to treat a younger one like family, they do get along. The ones in the following video, however, took things up a notch. They surprised everyone with their actions.

The cat in this video was pregnant. She was in labor, and was having a hard time giving birth to her babies. That is when the dog stepped in. He acted as a midwife throughout the ordeal! The dog licked and comforted the cat…

He also licked the babies and encouraged them to breathe. This is a very unusual sight indeed, as mother animals tend to be very protective of their young. But this pair really surprised everyone when they did this together!

They learned to put aside their differences to achieve a greater goal together. Isn’t that sweet?

Check out this amazing story below: