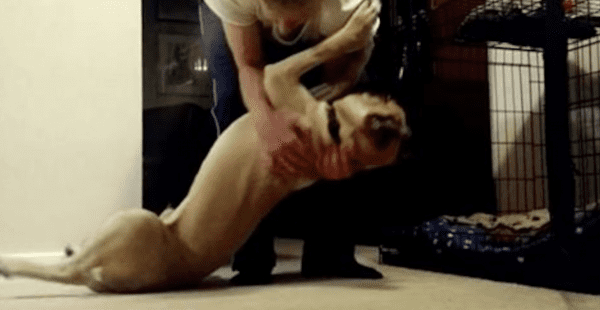 Being a child is awkward. You want to be independent but you can’t, you don’t want to attend school, but you have to—and so the list goes on. The same goes for pets.

Essentially, when we own a pet, we’re their parents and we have the ultimate say in what they do and where they go— in short, we try to guide them in the way in which we’d like them to behave. And just like parenting, being a pet owner can be difficult at times. And just like children, pets can be stubborn at times. Such is the circle of life!

So in this adorably cute yet somewhat hilarious video, you’ll see an owner trying its utmost best to get its pet bull mastiff to go to bed. Does it work? Absolutely not. In fact, this pup does almost everything in its power in order to avoid bed time. It plays dead, rolls around, lies on its side, lies on its back—you name it!

Eventually, its owner decides ‘enough is enough’ and persists to pick up the pup and move it to its bed, but to no avail. He then tries to slide the dog into it’s bed—still, no success. The pup merely sits in front of its bed without a care in the world. Well played, dog, well played!

This video proves that we can all be a little stubborn and a bit of hard work from time to time. But that at the end of the day, when our antics and shenanigans are all in the name of fun or done in good taste, then they’re actually a good laugh!

Watch this dog’s funny defiance in the link below! If you’ve loved this cute video, share it with your family and friends.