Woman was caught stealing eggs to feed her family. Officer delivers truckloads of groceries to her 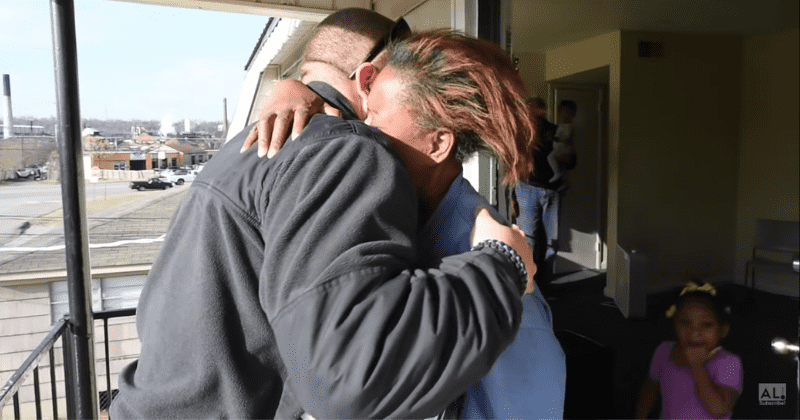 The last time Helen Johnson saw her house filled with groceries and food supplies was when she was 12 years old. But that changed after she saw two truckloads of groceries were delivered to her doorstep by an officer named William Stacy and his colleagues in Tarrant, Alabama. Officer Stacy had met Johnson when the latter was caught stealing eggs from a Dollar General because she was desperate to feed her family.

At the time of the incident in 2014, Johnson was living with her two daughters, her niece, and her two grandchildren, who were aged 1 and 3. The children’s mother would get a welfare check of $120 a month but unfortunately, the check got lost in the mail that month. The family also ran on the disability check that Johnson receives, but they had not received that yet either by then.

After the family had gone two days without any food, Johnson made a trip to the Dollar General on Pinson Valley Parkway; she hoped that the $1.25 in her pocket would be enough for a carton of eggs. But once she got to the store, she found that she was short of 50 cents, and that was excluding tax. Out of sheer desperation to feed her family, Johnson stuffed five eggs in her pocket but was stopped by the store worker before she could leave.

“Of course when I put them in my jacket pocket they broke,” Johnson told Al.com. “I’m not a good thief at all.” The police were called to the store and Johnson was waiting for the handcuffs to fall on her wrists when Officer Stacy arrived at the scene. What Johnson didn’t know was that the store decided not to press charges. To add to her surprise, Johnson saw Officer Stacy walk out of the store with a carton of eggs, meant for her, that he had paid for.

“She started crying, she got very emotional and was very apologetic,” Officer Stacy said. “She tried to give me the money she had on her, $1.25.” The emotional mother and grandmother couldn’t believe it. “I was like, ‘Oh my God, thank you Jesus for this man,”’ she said. “He is my hero.”

For Officer Stacy, the struggle of a mother trying to feed her family was something he was familiar with. While growing up, he would see his own mother struggle to feed him and his sister, and in addition to this, Officer Stacy had once responded to a call to Johnson’s house before the incident at the store took place. When he responded to the call, he saw that the family would sleep on mattresses and were living in difficult circumstances.

So when he met Johnson at the Dollar General, he knew how tough it was for her. “I felt like it was the right thing to do. I didn’t want to pass judgment on her,” Officer Stacy said about buying her the eggsWhen Johnson asked the officer how she could repay him, he said all she needed to do was promise him that she would not try to steal again. “Sometimes the best route is to not arrest,” Officer Stacy said. “I hope she won’t do it again. I pray she doesn’t, and I don’t think she will.” But that was not the last that Johnson saw of Officer Stacy. A few days after their encounter at the store, Johnson saw Tarrant police officers at her doorstep, and she had no idea why.

“I was shook and so scared,” she said. “I thought it was about the eggs. My grandbaby said, ‘Are you going to jail?’ and I said I hoped not.” Moments later, she realized Officer Stacy and Officer Jay Jenkins were there to deliver two loads of food supplies to her apartment.

“I just busted out and started hollering,” Johnson said. “I was yelling so loud. I would have been a good cheerleader.”

“The last time I saw my house this full, I was 12-years-old and staying with my grandmother. I’ve been crying all day,” said Johnson, who was overwhelmed by the gratitude she felt for the thoughtful officers.