If you’re teaching a class about a particular topic, it’s common for people to come up to you and ask you to prove that you know what you’re talking about. However, one man got way more than he bargained for when he approached a woman in New Orleans, Louisiana, in April 2019. Not only did she prove that she was an expert in her field, she taught the man a valuable lesson about stealing.

Meredith Livengood is a martial arts instructor that works at a gym in the New Orleans area. She helps her prospective students learn everything they need to know to protect themselves in any case of self-defense. A man approached her one day inquiring about the lessons she taught. Since she didn’t have any kind of pamphlet to give him, Livengood directed the man to check out what her gym had to offer.

He explained that his phone wasn’t working right, so Livengood offered to show him the training schedules and classes she offered on her own phone. In that moment, it was clear that the man actually had no intention of finding out more about martial arts lessons after all, as he began to run away the moment he had a grasp on Livengood’s phone.

The martial arts instructor didn’t even hesitate and instantly whipped out some of her practiced moves, holding the man in an expertly-trained move as she tried to get her phone back. Read on to find out more about how this woman showed off her incredible moves while teaching a thief a valuable lesson. 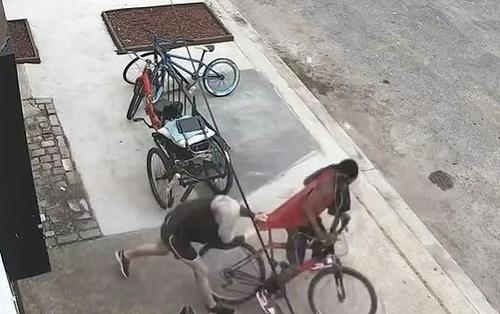 WWLTV reported that the entire incident between a martial arts instructor and a thief trying to snatch her phone was captured on surveillance video by Lo Floyd, a man who lives next to the gym where it all took place. Right after Livengood pulled out her phone to show who she assumed was a prospective student her training schedules, the man grabbed her phone and attempted to flee the scene on his bike.

“I saw his phone had no signal, so I showed him our Instagram page on my phone,” Livengood said, looking back on the incident. “I was trying to help him.”

Fortunately, the thief didn’t get too far as Livengood immediately jumped into action, putting the thief in a hold by using a martial arts technique. The move caused the thief to drop the phone, and Livengood released him before shouting at him to leave. WWLTV reported that he got on his bike and left.

“He underestimated his opponent,” Livengood said. “People underestimate women a lot, and they shouldn’t.” She also revealed that she never felt scared during the incident. Livengood expressed that she actually felt empowered, and explained that it was absolutely unwise to challenge a martial arts instructor.

Floyd agreed, and said, “He stepped in the wrong garage!” When he saw the video footage in real time, he and his friend quickly ran down to help the martial arts instructor, but she had already taken care of it by the time they got there. “The fact that I’ve already known she’s a black belt, I knew it was in her,” he said. “But to finally see it, I’m not gonna cross her.”

Since the video has received attention on the internet, Livengood has decided to give back to the community. According to WWLTV’s Facebook page, Livengood’s martial arts studio — 36 Chambers — offered free personal training for those in the police force. The post read:

“’36 Chambers would like to offer free personal training to any police officer, especially the ones closest to our community, the NOPD, so that they may continue to improve physically and mentally, and are able to apprehend responsibly, with minimal force,’ Meredith Livengood said.

“According to the 36 Chambers website, Livengood offers a variety of different martial arts for learners of all ages and levels. Her website reads:

“We are a diverse inclusive space that is open to all people…We are a martial arts studio offering classes and personal training in Kickboxing, Kung Fu, Tai Chi, and Yoga. No commitment, no monthly fee. Pay by the class or purchase discounted class packs. Great for all ages and skill levels.”

The website also goes into the history behind Livengood’s new studio, as it explains how they used to be a traditional Kung Fu school:

“We used to run a traditional Shaolin Kung Fu school and found the usual contracts and fees associated with this type of training prevented most people from being able to participate. We decided to open our own studio to make this type of training affordable and accessible to the New Orleans community.

“Would you ever consider taking a martial arts course in order to be more well-equipped to defend yourself? Livengood’s martial arts definitely helped her out in this situation.

What do you think about this martial arts instructor springing into action to stop a thief from stealing her phone? Let us know, and be sure to send this to your family and friends, too.