Stray Cat Who Was Rescued from Flood Channel in Nevada Needs a Home! 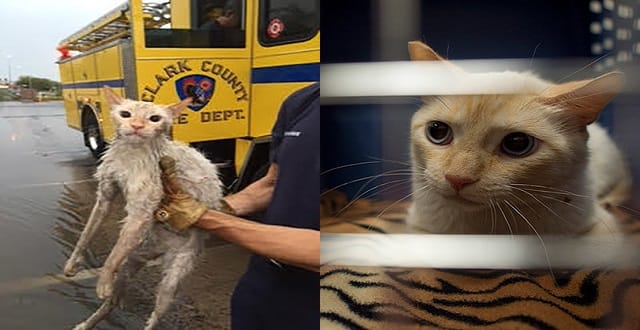 NEVADA – Believe it or not, the photo of the kitty you see here is the same kitty in both photos! On the left side, he looking waterlogged and quite miserable.
Well, it just so happens he was rescued from a flood channel recently!

Well, thanks to the caring staff at a local veterinarian’s office, the cream-colored kitty is not feeling itself again and ready to scratch someone’s eyes out.

“The cat is very fractious and feral,” stated veterinarian Carolyn Garcia, who helped nurse the furry flood victim back to health.

A Clark County fire captain had to wear protective gloves when he carried the cat into the Pebble Maryland Animal Hospital, on Pebble Road and South Maryland Parkway, not far from the wash where the cat was rescued June 30.

(The before and after shots of a feral cat that was rescued by Clark County firefighters after the June 30 flooding near Pebble Road and Maryland Parkway in Las Vegas. (Clark County Fire Department and Bridget Bennet/Las Vegas Review-Journal)

Garcia said the feline was completely drenched, cold and also in shock. His paws were a bit bloody and he was missing claws from his panicked fight to escape the flash flood.

“He was so hypothermic, his temperature wouldn’t even register the first few times we tried to take it,” she explained.

The department sent out a picture of the sad, soaked cat and it went viral. At the time, a department spokesman identified the animal as the beloved pet of a homeless man who was rescued from the same wash that day.

However, now it appears the proximity of the man and the cat was pure coincidence. Garcia said this cat shows no interest in human companionship.

Apparently, he has his own reasons. The cat is missing the tip of one ear, which is a sure sign that he once was captured as part of a feral cat program to be neutered, vaccinated and returned to the streets.

Citing patient privacy laws, the Clark County Fire Department could not provide an update on the condition of the homeless man, who was then transported to the hospital with “unknown injuries” after being pulled from the waters.

Garcia said the cat is doing a lot better. It was touch and go for a few days, but he is now eating again and seems to have regained some of his strength.

“He looks like a completely different cat,” albeit an angry one prone to both fight and flight, she stated.

He is being kept by himself in a cage in the clinic’s isolation ward to try to keep him calm and stress-free, but when staff members try to examine him or fill his food bowl, he hisses, growls and charges them.

None of those aggressive tendencies were evident on Thursday, when Garcia brought him out in a carrier to have his picture taken for the newspaper. He mostly looked a bit scared as he crouched trembling at the back of the carrier, his blue eyes wide and dilated.

Garcia explained the clinic plans to update his shots and hang onto him for another week or so and then see if anyone wants to adopt him. Ideally, the 2- to 3-year-old cat will end up in a quiet home with no other pets around and an owner who is willing to take on a project.

“He would need a lot of work and a lot of patience from whoever takes him,” Garcia stated. “It’s worth a shot trying to find a home for him, but I don’t know if it’s going to work out.”

If a suitable home cannot be found, Garcia said the internet-famous cat with the bad attitude will most likely just be turned loose back on the streets in the same area where he was rescued.

“It’s a beautiful cat, but I don’t know if he’s adoptable,” she concluded. “He might have to go back outside where he’s used to being.”