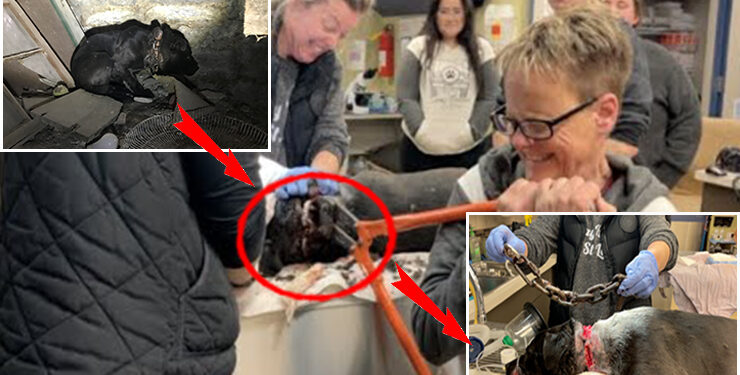 Imagine you’re a puppy and someone locks a chain around your neck. As months go by and you grow into a young adult, the chain gets tighter and tighter. So tight that it cuts into your skin, causing searing pain that you can never escape from. After awhile, this cruel prison becomes part of you as you try to block out the pain and just survive another day.

A call came in that a dog with an embedded collar was spotted running down the street. When we arrived, we found her sitting with another dog outside of an abandoned house. The other dog, a blue pittie, was nervous and worried about her injured friend and wondered why we were there. They were “living” in a dangerous neighborhood where several murders had recently taken place, so we suspect that the dogs most likely had not been treated with much kindness and had every right to feel scared. We set a trap for the blue pittie so we could then focus on rescuing the injured dog. To our relief, she was hungry and went right into the trap. She had a gaping wound on the side of her face that our vets would later discover was a gunshot wound and removed a bullet that had been lodged inside. 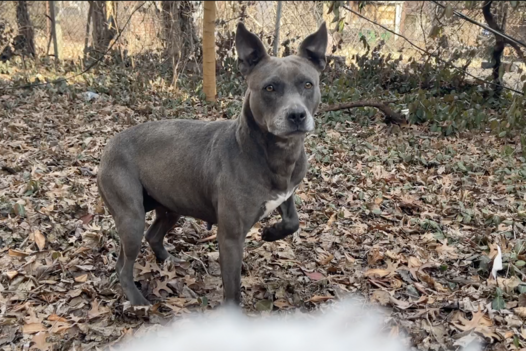 We moved into the freezing cold basement, littered with discarded kids’ toys and trash from whomever lived here before. It’s always a haunting scene to see all the belongings someone abruptly left behind.

In the back room, we saw the dog with the embedded collar. As we moved closer to her, we stopped dead in our tracks….there was a THIRD dog. A large rottweiler sat on a couch, staring at us. 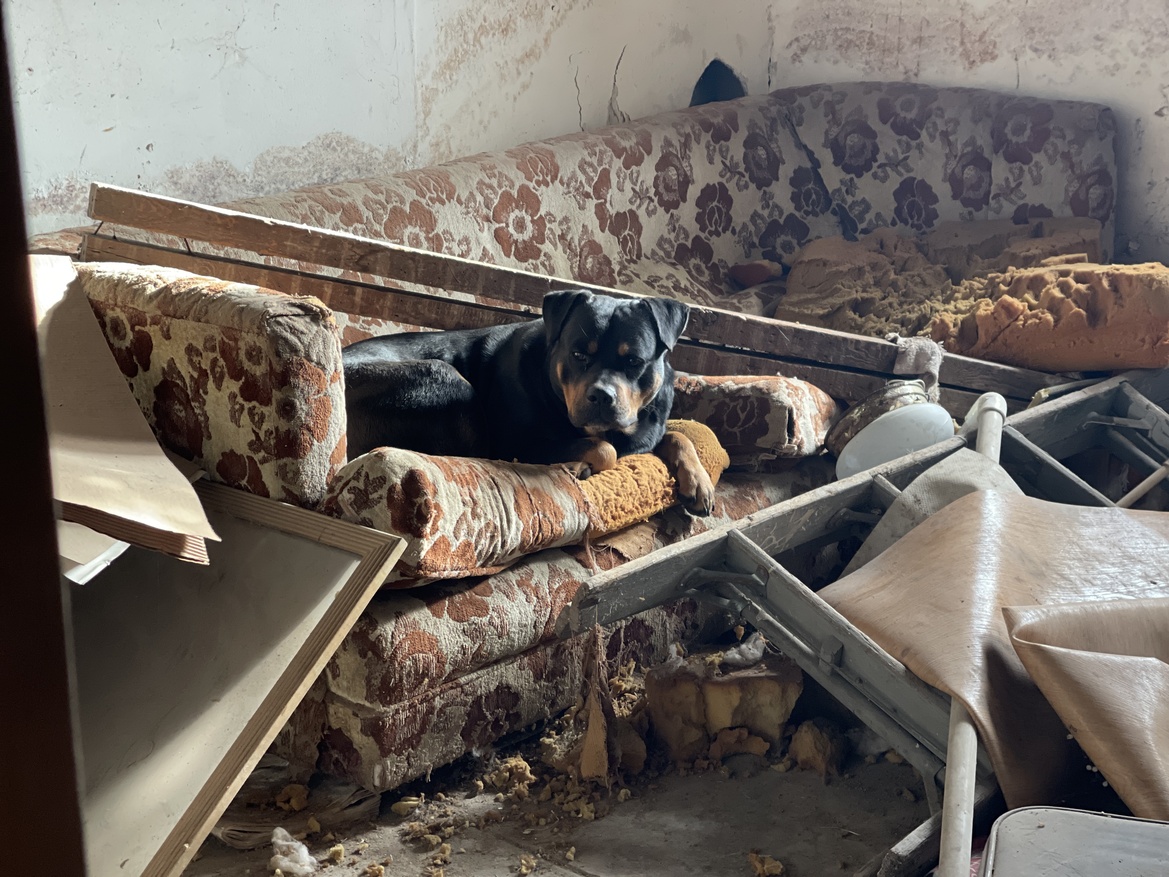 We were able to separate the two dogs into two different parts of the basement and focused our efforts on the dog with the embedded collar. We had to put a leash on her, but the chain was so badly embedded that it hurt her and she lunged and snapped at us. Her large, fearful eyes broke our heart. We didn’t want to traumatize her or pull on the leash to try to lead her outside, so we called the shelter and had reinforcements come with a large, plastic crate. 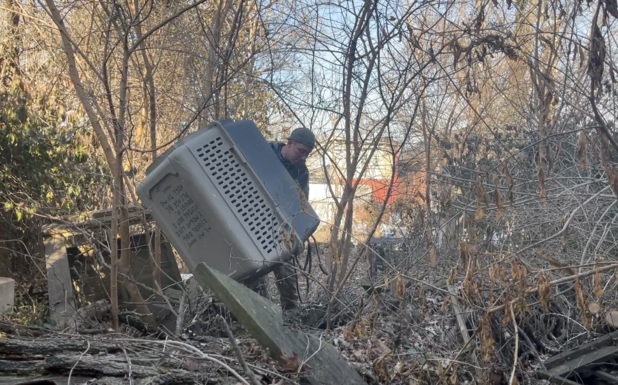 With a small but paintful tug, we were able to get her to go into the crate, but she screamed in fear and thrashed, trying to get out. Her pain cut us deep within, but we knew she would finally get the life-saving help she desperately needed. 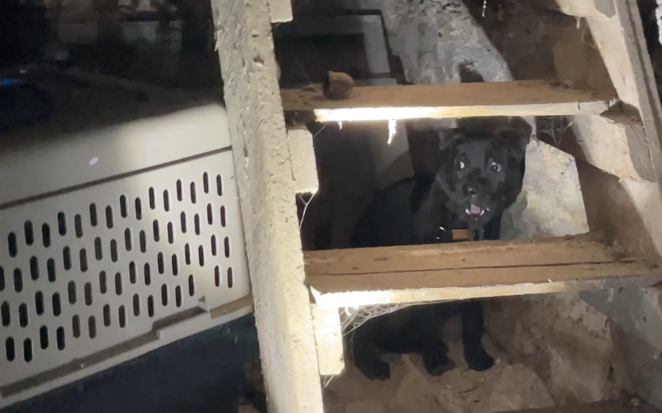 Once she was loaded in the rescue Jeep, we came back in to rescue the Rottweiler. This big boy turned out to be a big baby and was shaking from fear and the freezing temperatures. Once we had a leash on him, he decided to trust us and came right with us. We had to climb over a large log to get out, and although hesitant, he was so brave. 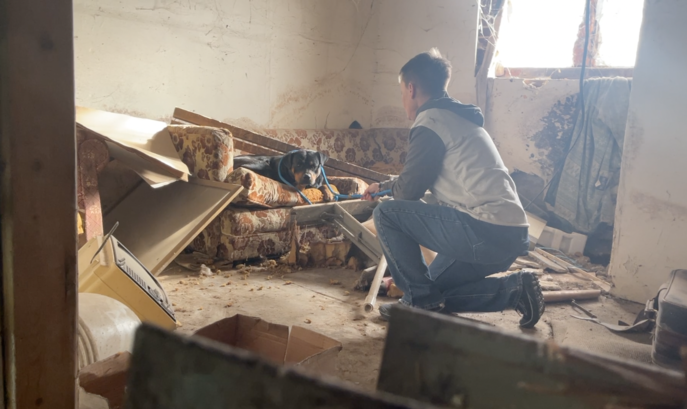 Once all three dogs were safely loaded in the car and free from the horrors of street life, we headed directly to our trauma center. We had to get that embedded chain off the poor dog’s neck.

We immediately sedated her and got an up-close look which completely horrified us. This was by far the worst embedded collar we have ever seen, and sadly, we have seen so many over the years. This was a huge chain cutting into her neck, and her skin was growing around the links and through the carabiner. Our veterinarians determined she was only about eleven months old. The pain and fear this little babe has faced her entire life is unfathomable. 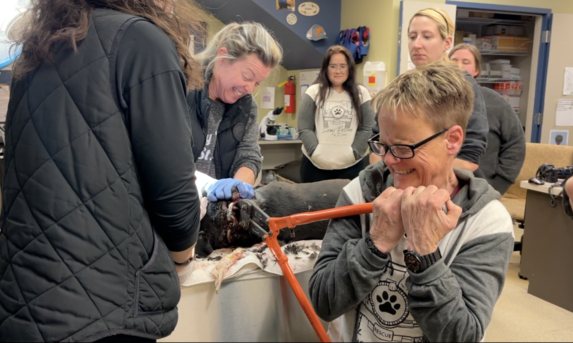 Our entire veterinary team had to stop what they were doing to all work on freeing this poor dog from her chain as many of us looked on with horror and tears in our eyes. After shaving and cleaning the area, we had to use bolt cutters and used all of our strength to finally get it to break. Because a large mound of skin was growing through, we then had to cauterize the flesh around the carabiner. It finally came off. The sight of this huge, thick chain took our breath away. But, she was finally free of her prison. 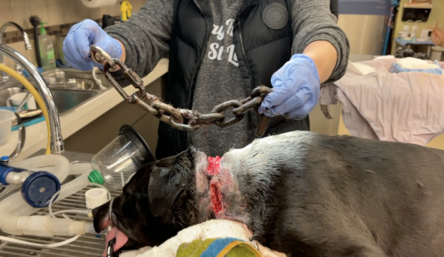 Dr. Schulz stitched up her huge, gaping wound that now went all the way around her neck with drains in and bandaged it. When she awoke from sedation, she was terrified of people. Even with the sweetest voices, she wanted nothing to do with us. Over the next few days she began to let us pet her and would eat delicious, herb chicken we made for her. She started feeling so much better when she finally started to eat. 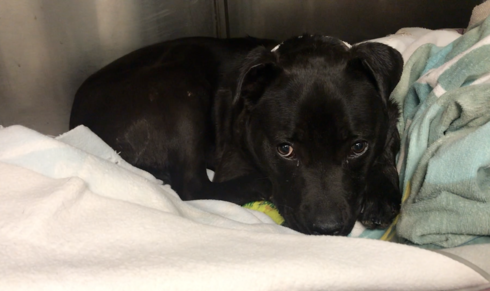 Like all of the dogs we rescue, we will give her all the time she needs to learn to trust us. We work on their timeline, no matter how long it takes. Her two doggie friends are unbelievably sweet and are loving life here at Stray Rescue. They are both ready for adoption and ready to be spoiled as a valued member of a family. 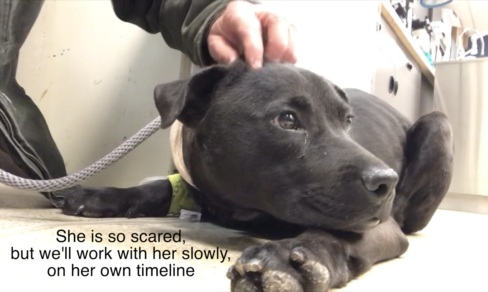 This trio was named after the Star Trek: Voyager. The adorable blue pittie with the bullet wound is Kess, our big sweet rottweiler boy is Chakotay, and our little one who is now free from her chain is Seska.