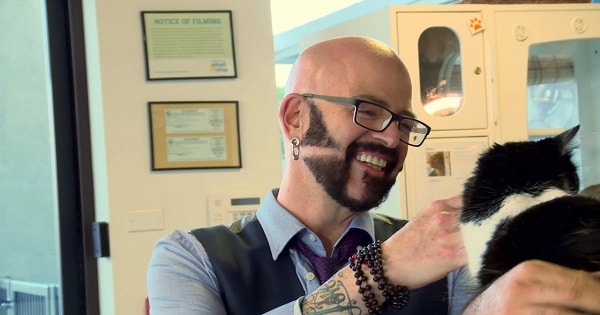 My Cat From Hell is a hit on Animal Planet dealing with cat behavioral issues and is presented by the awesome Jackson Galaxy. Galaxy began his career in animal shelters and has spent over 20 years developing his “Cat Mojo” approach to solving cat (and human) issues. The Jackson Galaxy Foundation is heading to its ultimate goal of achieving a “no-kill” reality in the US and beyond.

One day not long ago on a shoot, ‘My Cat From Hell’ cameraman Adam, who has been around hundreds of cats during his time on the show, was approached by a black and white kitty named Winnie. She literally and completely stole his heart while filming a show segment and as he had lost his own his own kitty three months previously, he decided to adopt her right there and then and give her a new home.

This is such a heartwarming video to watch – see for yourself!