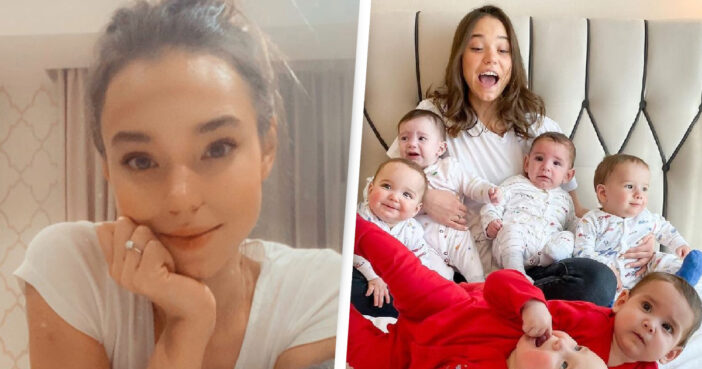 Would you want to have the world’s largest family?

From a young age, many of us grew up knowing we wanted to have a big family of our own. At least, this is true for me. I grew up in a house with my two sisters and many other kids that my mom babysat throughout the day. Basically, it felt like I had the world’s largest family, and it’s something that I would like to have for myself in a few years.

But maybe we all have different definitions of what a big family actually is. To the 22% of families with only children, this might seem huge to you. However, I’m sure some of you with 4 or 5 kids are chuckling, thinking, ‘you don’t even know that half of it!’

Unlike most of us, this Russian mother thinks more. A lot more. 105 to be precise.

Meet Christina Ozturk, she wants the world’s largest family
Christina is a 23-year-old mother from Russia who has taken to social media stating that she wants to have over 100 kids [1].

At the young age of 23, Christina is already a mother of 11 children but hopes that she can have dozens more with her wealthy hotel-owning husband, Galip Ozturk.

Where this story started
It should be noted the couple is living in Batumi, Georgia, a coastal town where it is legal to have children through surrogate mothers.

This town is also where the couple met. At the time, Ozturk was a single mom who desperately needed a break to reset. Christina went to Batumi and, of course, met her know husband Galip Ozturk.

“She is so easy to be with; she always has a smile on her lips and yet at the same time is shy and mysterious.

She was the kind of wife I always wanted for myself, an uncut diamond where I saw what a pure and kind heart she had,” Galip shares about his wife.

Fast forward, this married couple now have added 10 more children to their family through surrogate mothers.

Why do you need surrogacy for the World’s largest family?
Christina wanted a big family early on, and after discussing this with her husband, he was all on board. After the couple decided to have as many children as possible, they decided it may be the better course of action to hire surrogate mothers who can take some strain off her body.

“At the moment, I have 10 children with the latest addition, Olivia, who arrived at the end of last month. I gave birth to my eldest daughter Vika myself, six years ago.

The rest of the children are genetically ours from my husband and I, but were carried by surrogates,” shares Christina.

What does it take to have the world’s largest family?
Christina had taken to her social media accounts, declaring that she’s intended to have 105 kids with her husband. However, she has now clarified that she wants to have an extraordinary amount of children, but 105 was just a random number she threw out there.

“I don’t know how many they will eventually be, but we certainly don’t plan to stop at 10. […] We just not ready to talk about the final number. Everything has its time,” Christina Clarifies.

Clearly, money isn’t an issue for this couple, so the only barrier they face is time. If they truly want to have around 100 kids, it will most likely take them around 20 more years to make this a reality.

Okay, so you don’t need to have as many kids and Christina and Galip, but Big families are the best. We’ve already established I’m a little biased because of my Rockstar sisters, but truly there are some amazing benefits to having a bunch of little ones.

Reasons to have a large family
There’s someone to have fun with, always
Firstly, I can’t even describe to you the amount of laughing fits I had every single day in my childhood, and I only had two sisters. I can’t even imagine what it would be like with nine (or more) other siblings. But, I do know one thing. It would be hysterical!

Having the world’s largest family means you’re never lonely
We all crave a little alone time sometimes, but it’s also comforting someone you love is always close by. If there are a billion kids running around your house, there’s always someone to do something or relax with.

More kids mean less worry for the parents
Unless you have all 10 kids at the same time, they will vary in ages. They’ll always look out for each other especially, as some of your kids get older and become more responsible and capable for themselves.