He is suffering from severe burns, but for this dad, the pain is a small price to pay for his heroic deed.

Ray Lucas, a father from Eastpointe, Michigan, was with his wife Shi’Ann Brown when tragedy struck. He and his wife made a run to the corner gas station and were gone for only 15 minutes or so. Unbeknownst to them, their family was already in danger.

When they came back, they found themselves looking at a horrific sight – their house was engulfed in thick smoke.

Outside, he saw his mom and niece frantically watching the fire unfold before them.

They were frantic because Ray Lucas’s twin 18-month-old daughters Milan and Malaysia were still inside and asleep in the basement.

Lucas knew the stakes. The fire would spread quickly and indiscriminately. At that moment, he knew what he had to do.

“I just knew I had to get my babies out,” the 23-year-old father shared with FOX 2. “That’s what went through my mind.”

The situation inside was so much worse than they thought.

Lucas narrated the horrific conditions, recalling that he couldn’t even see his hand in front of his face. The only way to get to his daughters was to rely on memory.

Eventually, Lucas emerged from the burning house with both his daughters in his arms.

They all had to spend time in the ICU. Malaysia, the twin who suffered from severe burns, was the last to be discharged. She was reunited with her father Ray, mother Shi’ann, and her twin sister Milan, who had to recover from smoke inhalation and some second-degree burns.

As for Ray Lucas, he suffered severe injuries and was temporarily blind for three days.

His doctors said it was a miracle that his eyes recovered.

He was still thankful, though. He said that he got burns on his face and arms but the important thing was everyone is still alive.

Unfortunately for Lucas, he is unable to return to work due to the severity of his injuries.

And while they are all recovering physically, mentally, and emotionally from the tragedy, their financial recovery is facing an uphill battle.

He said that besides his family losing their home, they also lost a number of possessions and their medical bills were continuing to mount.

To help them through the crisis, their community set up a GoFundMe for the family. This was intended to cover the medical fees and the payment needed for their relocation.

“Please help us to bless this young man, the babies, and their mother Shi’Ann so that they may secure a new home, and restore and furnish a new home environment for the family to live. With such things like furniture, baby beds and baby furniture, in addition to diapers and clothing for both of the twin babies and clothing for the baby’s mother and the father. Funds are also needed to go towards medical bills and expenses. Shi’Ann had valuable family Heirlooms that can never be replaced that were also lost in the fire.”

It is a long way to recovery but Lucas did well as a father for giving his girls the chance to grow and live their lives to the fullest.

You can check their GoFundMe page here. 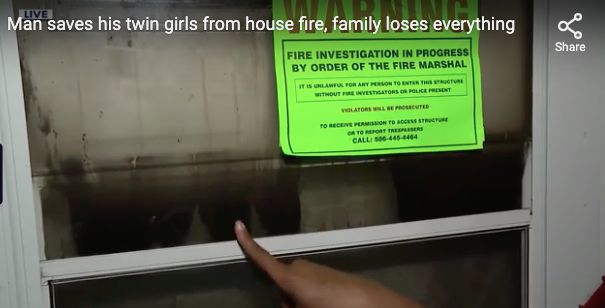