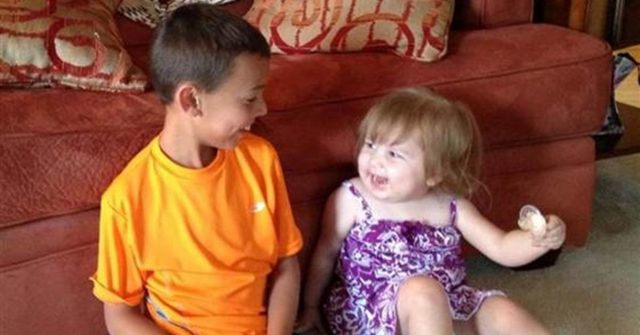 When 8-year-old Wyatt Erber won a huge citywide scavenger hunt in Edwardsville, Illinois, he gave his cash winnings to his 2-year-old neighbor who had recently started chemotherapy for childhood leukemia. The scavenger hunt was sponsored by First Clover Leaf Bank and required finding 20 clues across the city to win the $1,000 cash prize.

Wyatt’s mother, Noelle Erber, asked him if he would like to enter the contest, and she was surprised by his reply.

Noelle’s heart was touched by the kind thought of her son, and they discussed how the cash prize could help pay for their 2-year-old neighbor Cara’s medical bills.

“Wyatt immediately said, ‘Let’s do it, and if I win the $1,000, I want to give it to Cara,’” his mother explained. “The idea of being able to give a thousand dollars wowed him.”

“She grins ear-to-ear whenever Wyatt walks through the door,” Cara’s mother explained.

Cara was recently diagnosed with childhood leukemia, and after learning of this, Wyatt’s heart sank.

“He was really aware of what cancer is,” explained Wyatt’s mom. “When he found out Cara had cancer, his heart sank.”

The idea of winning a citywide event seemed like a long shot, but Wyatt was determined to do his best to help his little neighbor Cara and her family in their battle against cancer.

“I wanted to give it to them,” Wyatt said

As the scavenger hunt began, Wyatt and his mother visited 20 different businesses in Edwardsville, gradually collecting the clues, and then they returned to the bank once they had found them. To their surprise, they were the first team to turn in all of the clues.

After winning the cash prize, Wyatt and Noelle were not sure that the Kieltys would accept Wyatt’s generous gift, so he asked his mom to call Cara’s mother Trisha to ask her to accept it.

“I knew he was wanting to do it for Cara, which is the sweetest thing ever,” Trisha said. “But an 8-year-old giving adults money? I tried to protest to his mom. Then she told me he asked how much chemo this would buy Cara. He gets it.”

The Erbers and the Kieltys have been close friends since first becoming neighbors five years ago, and eventually they agreed to accept Wyatt’s generous donation by “focusing on the fact Wyatt is such a gracious kid.”

“I don’t know any 8-year-olds who would do this,” said the bank’s spokeswoman Rachel Case. “Wyatt’s big heart and sense of caring is beyond his years. We want to recognize Wyatt for the hometown hero that he is. I just get goose bumps thinking about what he did.”

A local charity agreed to match Wyatt’s donation to Cara, and others inspired by his kindness have sent him thank you cards containing donations for Cara in the mail.

Wyatt’s beautiful heart shows us that we’re not just here to make money. We’re here to love and to care for one another.