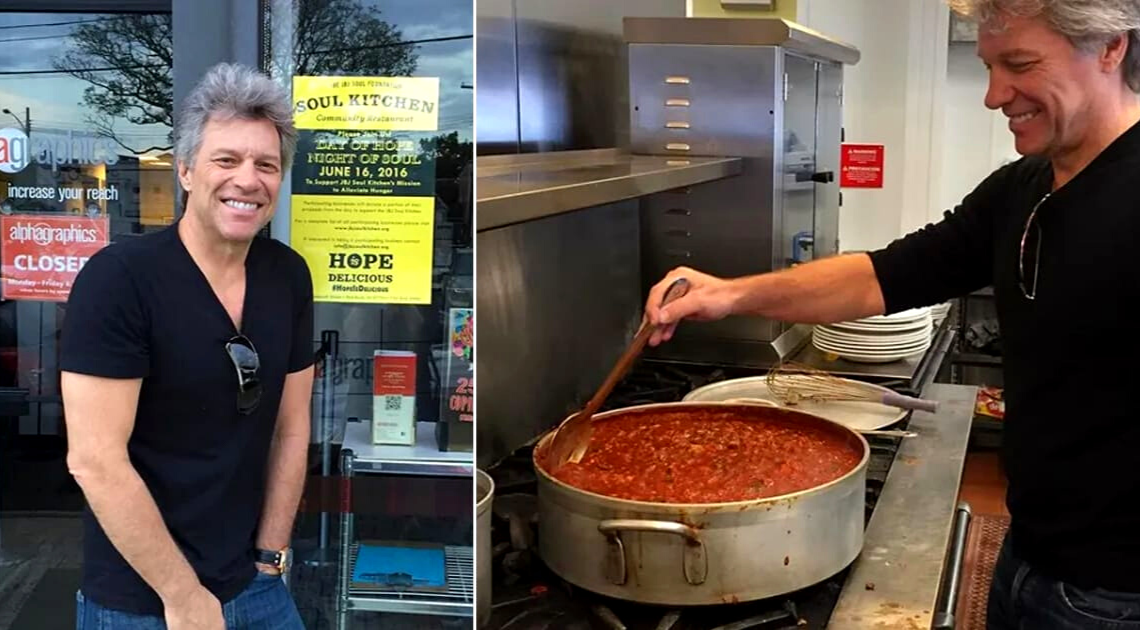 When someone becomes famous, they posses the power to influence positive changes to take place.

If you can’t think of such a person let us tell you what one of the best musicians of our time, Jon Bon Jovi, is doing for the needy Americans.

His good deeds change the lives of many and his heart of gold is something everyone is speaking about.

Bon Jovi’s community kitchens are open for thousands of people who can’t afford to have a hot meal and everyone agrees that his restaurants feel like home.

The start of The Jon Bon Jovi Soul Foundation in 2016 marked at the same time the start of the fight against homelessness and poverty and the music star and his wife seem to be winning it.

Their first restaurant was opened in 2011 and if you are ever given the chance to go there, you’ll notice that there aren’t prices listed on the menus. The reason why is because Soul Kitchen is unlike any restaurant out there and not everyone is expected to pay for what they get.

The customers, who are mostly people who can’t afford to buy their meal, can choose to volunteer in the restaurant instead. Those who have money, however, are encouraged to donate $20 and help pay for the food of the rest of the customers.

The first restaurant is situated in Red Bank, New Jersey, the second one opened in Toms River in New Jersey in 2016, and third one was opened this year on the grounds of Rutgers University.

Speaking on NBC Nightly News, Bon Jovi explained why they chose the university as the most suitable location. “Now what we realize is that there were kids in colleges that were hungry,” he said. “And this was a — logical progression. And Rutgers really embraced the concept.”

His wife Dorothea added: “People had this romanticized version of the starving student. It’s not as romantic as we would like to think it is.”

For those who opt to volunteer, the foundation offers professional job coaching, life coaching, financial coaching, and legal advice.

The restaurants take no reservations but work on the principle first-come-first-served. They say, however, that priority is given to those who are struggling financially the most.

The food offered is very tasty and consists of three-course meals. The starter is usually a soup or salad, the main course offered is fish, meat, or vegetarian dish, and finally a dessert. What’s most, the food is prepared by professional chefs with fresh ingredients from the restaurants’ own garden.

Soul Kitchen is described as “a place where individuals or families can come to eat a delicious farm-to-table meal in a warm, welcoming setting and meet our neighbors.”

We truly hope other influential people will find inspiration in the work of Bon Jovi and his wife and will do something similar for the vulnerable members of their communities.

This is truly awesome. Please share it with your family and friends.