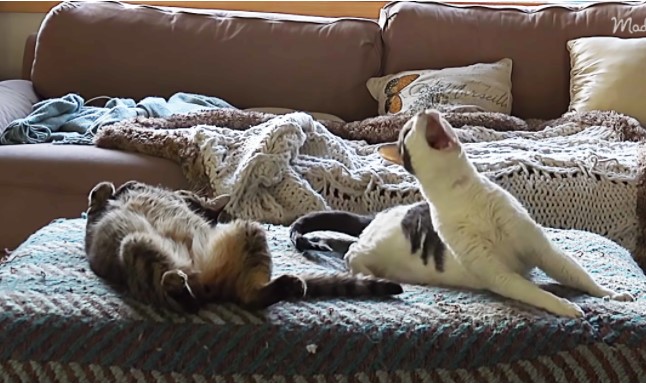 Adult cats are normally silent except in extreme situations where anger or fear provokes vocalizations.

The fact that pet cats continue meowing in adulthood has led researchers to speculate that they’re living in a state of prolonged kittenhood. But what if a cat is making really strange noises?

If you think something might be wrong, it’s definitely worth talking to a vet. If everything is okay, well, your cat may be a little odd. It’s part of their charm!

As you’ll see in the video posted below, it would seem that the cat making strange noises is a perfectly healthy oddball. The man who made the video explained what led him to hit record:

“Lately something really strange has been going on in our house. It was like there was this strange noise that kept happening upstairs.

And I could never catch what it was. So the other day I set up a camera to try to see what it was, to catch it and sure enough, I managed to catch something really, really strange.”

67699-OG1-Hidden-Camera-Reveals-This-Man’s-Cat-To-Be-Broken-You-Won’t-Believe-What-You-See
The hidden camera revealed two cats hanging out on a large ottoman.

It’s actually kind of sweet to see that they’re friends. One of them is asleep on his back — as we said, cats can be eccentric.

The other is in a more cat-like position. Jumping forward 10 minutes, we see that it’s the one who looked more like a normal cat who’s responsible for the mystery noises.

“What is that? What is he doing? That cat is the weirdest cat in the world. It’s like he’s broken. Somebody, please tell me what is going on! I’m pretty sure my cat is not a cat. What is it? I don’t know.”

We can’t vouch for the authenticity of this video, but it’s certainly food for thought.