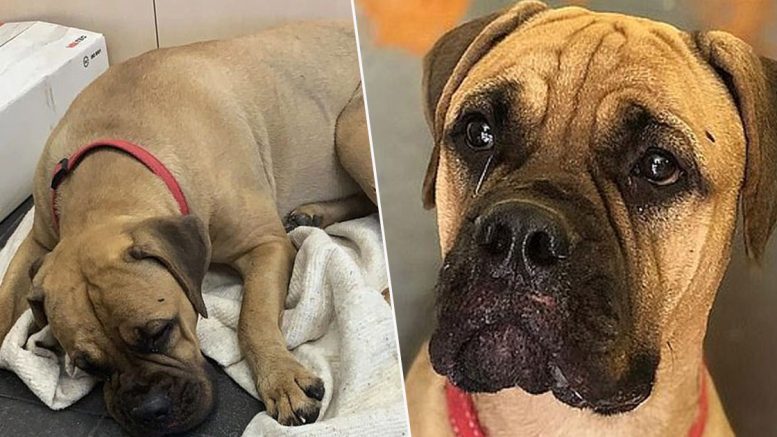 A rejected Bullmastiff dog named Maru reportedly walked 125 miles through the Russian countryside to get to the ungrateful owner who abandoned her. At the end of her long journey, through a wilderness with wolves and bears along the way, she was found near an industrial estate near the owner’s home.

According to The Siberian Times, kennel owner Alla Morozova sold Maru to a couple in Krasnoyarsk when she was five months old. Six months later, the woman owner called Morozova up to complain she was “allergic” to the dog and asked the kennel to take Maru back.

“I never give up my puppies and when a dog is bought, it is stipulated that the owners should inform me if they do not need a dog anymore,” Morozova told the Siberian Times.

The couple agreed to send Maru back to the kennel in Novosibirsk by train, with an attendant keeping eye on her. But 200 kilometers into the trip, the train stopped at Achninsk.

“The dog had a panic attack, she was frightened,” Morozova said. “She had been brought by her owners, then they disappeared somewhere. The noise of the train scared her.”

According to the kennel owner, the dog jumped out of a compartment door, and kicked a conductor out of the way. When the door opened at the train station, Maru “jumped out like a bullet.”

When Morozova called the dog’s owners, she was shocked to find out they did not care.

“That angered me. The owners were not upset at all, like, well, the dog is lost and that’s all right. That was their answer,” she told local reporters. “They gave the dog away and the load fell off their shoulders.”

Amazingly, the dog was found more than two days later in an industrial part of Krasnoyarsk, where her owners live. It is thought she followed the train tracks all the way there.

“She had walked and run for two and a half days. Luckily neither bears ate her, nor wolves chewed her up,” Morozova said. “Volunteers found her in an industrial zone. The dog was very tired. She was lame, her paws were broken. The pads were damaged. Her muzzle was broken. Maru fell from the railway embankment.”

The volunteers who found Maru said she was in tears.

“I’m sure that she was looking for her house. Dogs are very attached to people,” Morozova explained. “She did not run to Novosibirsk, she wanted to go back where she lived. It is surprising that she went the right way. Geographically, she had no reference points at all. In the city she used to walk only in the yard, she never went anywhere else. And to make her away through the wild taiga, it is an amazing case.”

Morozova said one of her friends drove Maru back to the kennel and the dog is now recovering from her injuries. She was reunited with her parents.

Thank you, love you.