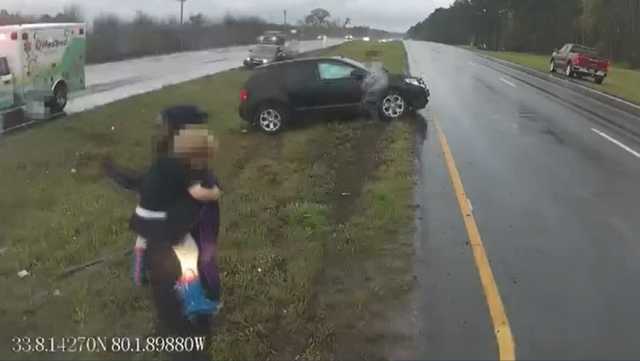 In late March, a delivery driver activated his heroic power when he rescued a child following a car crash on a South Carolina highway.

According to WCSC, FedEx delivery driver Damien Rose was heading back to the office after a completed shift when he detected smoke coming from the distance. Upon arrival on Highway 52 near Moncks Corner, he saw two cars involved in a wreck. Immediately, he knew he had to do something.

“So as soon as I got there, I put my vehicle in park and just ran straight to the car,” Rose told the local news outlet.

The delivery truck caught footage as Rose courageously pulled over and darted to the scene.

As he rushed to one of the cars, Rose recalls hearing yelling and screaming about a child who appeared to be hurt. The child was bleeding from his mouth, he told reporters. Footage captured Rose pulling the young child to safety as he walked away from the car with him in his arms.

After clearing the child, Rose instinctively wanted to help other passengers, including an older woman in another vehicle. Due to the damaged doors, he decided to wait with the family for paramedics to arrive.

“Her husband said that she was stuck, but I couldn’t get her out,” said Rose, according to Local 12. “I went to the other side to try to get her out again, and pull the door, but it still didn’t work.”

The family expressed their gratitude for Rose’s heroic actions and instincts.

“My grandma got in an accident before, and somebody was there to save her,” Rose said, according to Local 12.

According to Rose, he’s the one who feels grateful. The delivery driver knows the grandfather of the child involved in the accident. In fact, the child’s grandfather is on Rose’s delivery route.

“Hopefully, blessings come back,” said Rose. “It always comes back. I never trip about things like that.”

“If you’re in public, and you see anything, even if it’s not an accident, just anything in danger, you should actually tend to be safe for yourself, be cautious and everything, but you should react and tend to it,” said Rose.