A Farmer Couple Panics When They Can’t Find Their Newly Hatched Ducklings Until They See Their Cat Carrying One In Her Mouth! 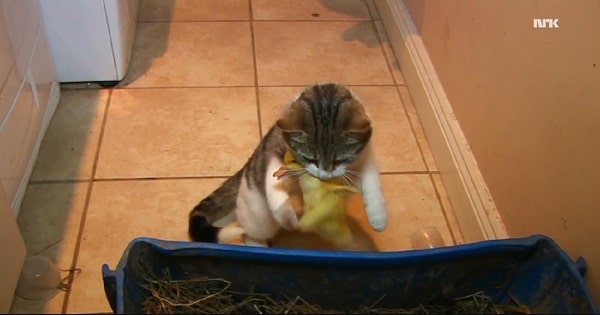 Emma and Ronan Lally are proud owners of a farm in Clara, Ireland where an unusual thing happened not long ago. They were impatiently waiting for a few little ducklings to hatch, so they entered the farm one day and checked on the eggs. To their surprise, the hatched ducklings were nowhere to be found although discarded egg shells were in the hay!

They started looking for the ducklings in panic and noticed their cat Della with one of them in her mouth! They thought that Della ate the poor duckling and took it away from her only to find the duckling unhurt. It seemed like Della was gently carrying the tiny ducklings away from harm. Sometime later, they found all 3 ducklings safe snuggling under Della. They were obviously looking for something to keep them warm and safe and Della’s mommy instincts kicked in. You see, the cat just had a litter of 3, so she knew what she was doing.

As ducks grow much faster than kittens, however, they soon became a bit too much for the cat. They are still following Della around, who’s having her hands full with her own babies. Take a look at a video of Della and the 3 cute ducklings below: