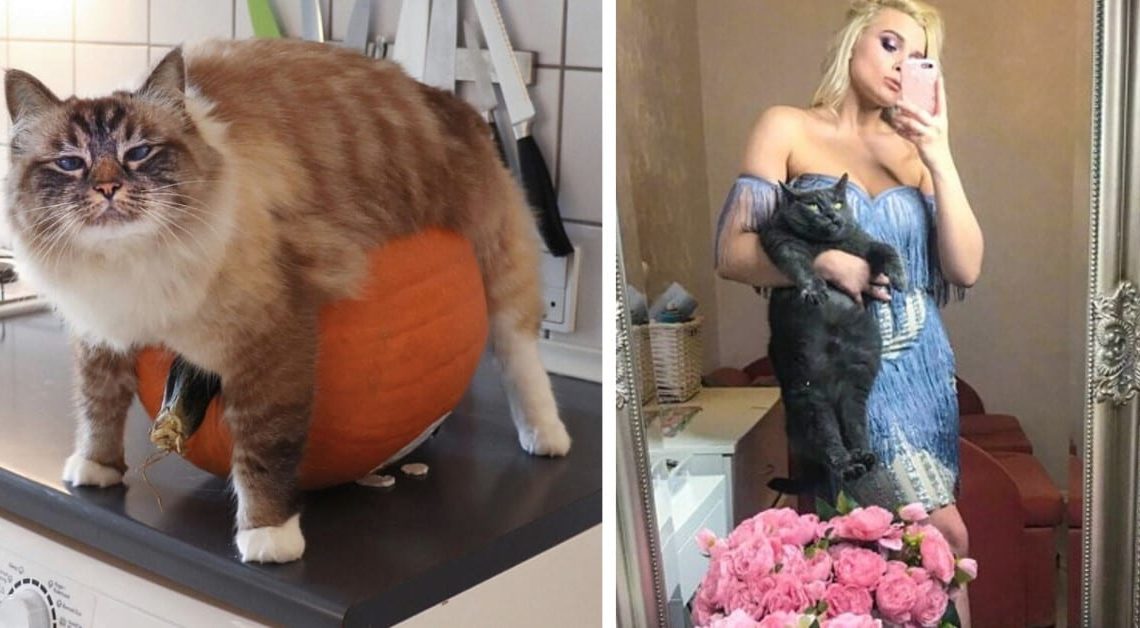 Especially if they are weird? Well, that isn’t anything special since we all know cats just love to sleep in the weirdest positions whenever they get the chance. However, the following pictures aren’t of just cats sleeping but just everything including one sitting on a pumpkin.

While we do think of cats as quite graceful and agile, sometimes that couldn’t be further from the truth. Because they can be quite clumsy and just plain weird at times. From claiming a rabbit cage as their home to looking like a huge turkey leg (Yes really), who wouldn’t fall in love with these creatures?

#1 When you wake up and a stranger is standing in your eyesight.

#2 Are we sure this is a cat? Because it looks like a very furry turkey leg.

#3 This is most of us when we just wake up and haven’t had our daily cup of coffee yet.

#4 Some cats just love voyeurism. What else could be the reason?

#5 When you try to do a backflip and somehow end up stuck like that.

#6 The grumpy kitty is clearly not going to move an inch.

The rabbit clearly looks like a pushover. However, if this cat had kicked me out of my house, I wouldn’t have argued with her either. I mean just look at her!

#7 ‘It was your fault for putting the yogurt in my reach, hooman.’

#8 I would be careful, this kitten is plotting revenge by the looks of it.

#9 ‘I am not an accessory for your selfie, Put my down hooman!’

#10 This is what happens when the school photographer tells you to smile.

#11 That is one of the derpiest looks I have ever seen on a creature.

She is clearly not a big fan of Halloween and doesn’t want you to carve this pumpkin. It really is hilarious that cats will find anything to sit or nap on except their expensive bed of course.

#13 This cat is clearly regretting all of her life decisions that led her to be stuck like this.

#14 They probably just wanted a bath and some private time. You ruined their romantic getaway.

#15 He has snorted a bit too much catnip.

Which is the weirdest position have you found your cat in? Let us know in the comments below. And don’t forget to share with your friends so they can enjoy a daily dose of adorableness as well.