3,200 YEAR OLD TREE IS SO MASSIVE IT’S NEVER BEEN CAPTURED IN A SINGLE IMAGE. UNTIL NOW. 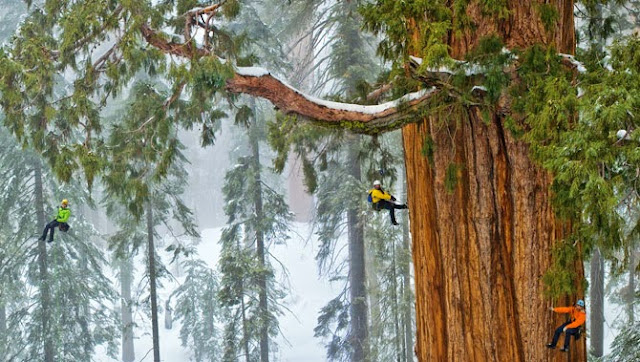 Cloaked in the snows of California’s Sierra Nevada, the 3,200-year-old giant sequoia called the President rises 247 feet. Two other sequoias have wider trunks, but none has a larger crown, say the scientists who climbed it.

The figure at top seems taller than the other climbers because he’s standing forward on one of the great limbs.

The trunk is 27 feet wide and the his mighty branches hold 2 billion needles, the most of any tree on the planet. On top of that, he still adds one cubic meter of wood per year – making him one of the fastest growing trees in the world. Giant sequoias exist in only one place, where The President and smaller trees that make up his “House” and “Senate”, reside.

On the western slope of the Sierra Nevadas in California, at 5000-8000 ft above sea level. The team painstakingly put together a set of pulleys and levers to climb the tree. It took 32 days and the piecing together of 126 separate photos, but they managed it! Awesome stuff.

Here’s some footage of the team at work: