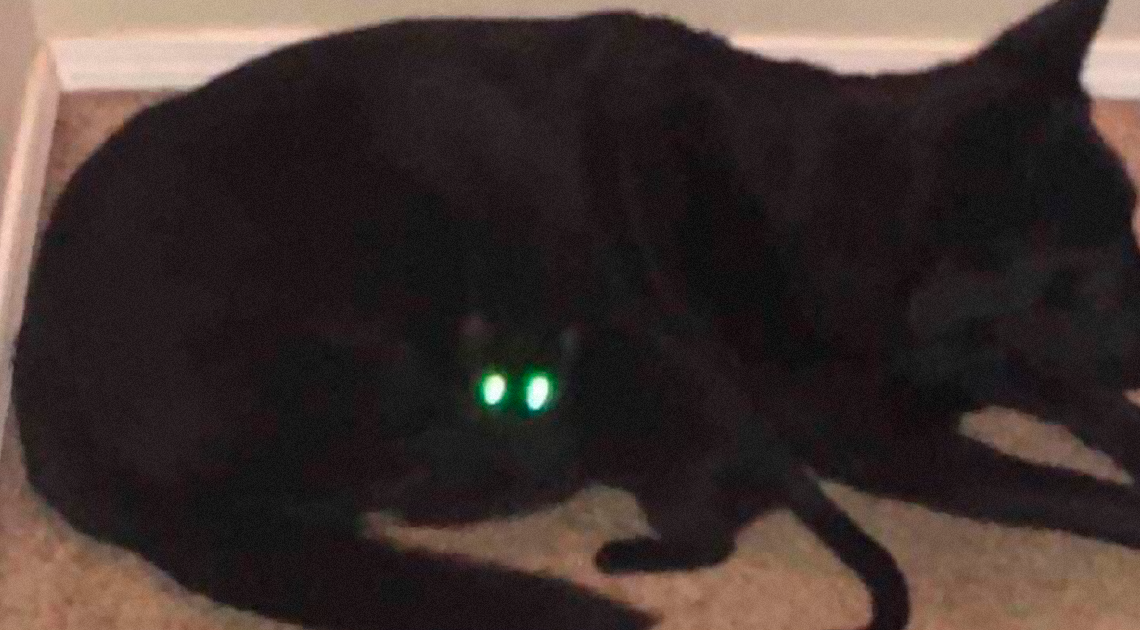 There are a lot of very cute and admirable things our cats do from time to time that leave us feeling happy and, at times, amused even. It might seem as though cats have really mastered the art of being unpredictable but it can be surprising how simple their minds actually are. The random and bizarre actions of our cats may confuse us endlessly and even be a huge inconvenience at times, but if we really pay attention to their habits and nature it’s pretty easy to predict their course of action, even if there’s little we can do to stop them. This cat owner, that goes by the name Ristay, was pretty alarmed when she couldn’t find her cat one day. She was well aware of her cat’s tendency to hide away anytime the cat saw someone other than Ristay. The small black cat, Petunia, was also very fond of their black German Shepherd, named Atreyu. Ristay looked almost everywhere in her house where she thought the cat could’ve been hiding, but all her endless efforts bore no fruit. Eventually, she finds her cat, Petunia, with Atreyu but this was no easy feat thanks to the nature of her pets’ physical appearances. They can often be found curled up against each other, the small black cat entirely camouflaged under the German Shephard’s black hide. Ristay, the Alaskan artist, documents this amusing experience with the use of her amazing artistic talent through these comics. She even added a few real pictures to help aid the imagination.

When Ristay has to look for her cat … 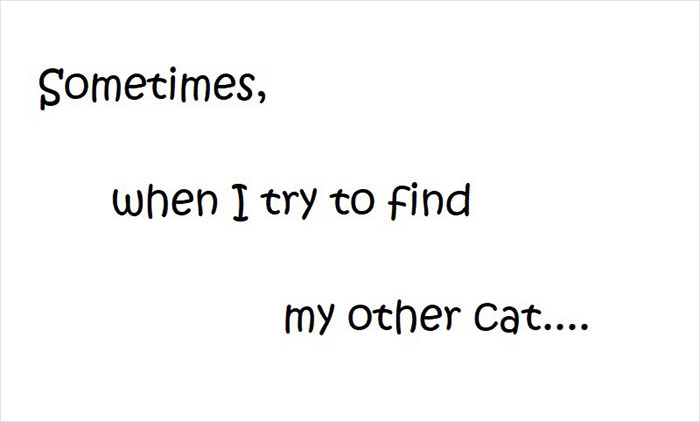 She has to comb through every inch of her house. 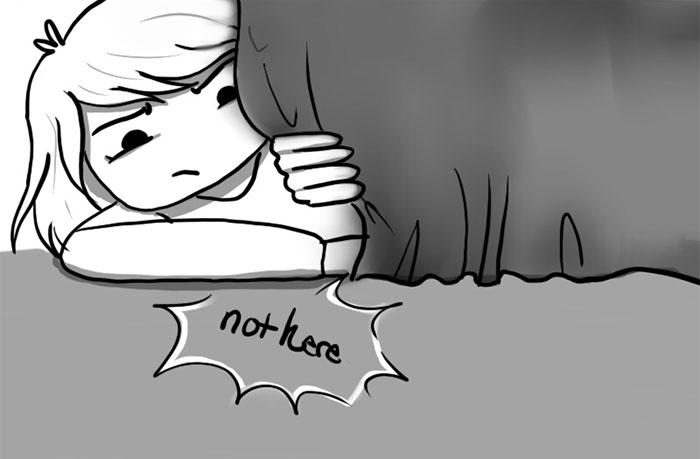 And yet she finds no traces of the cat anywhere 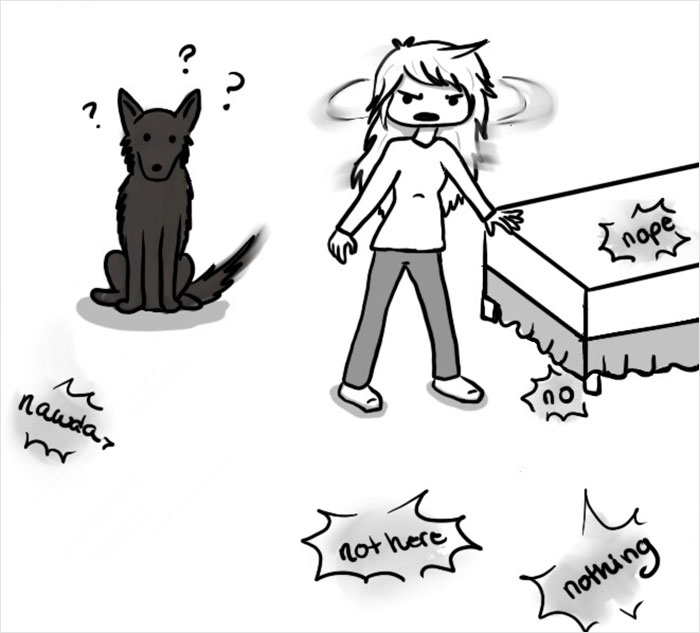 But then with a sudden epiphany, 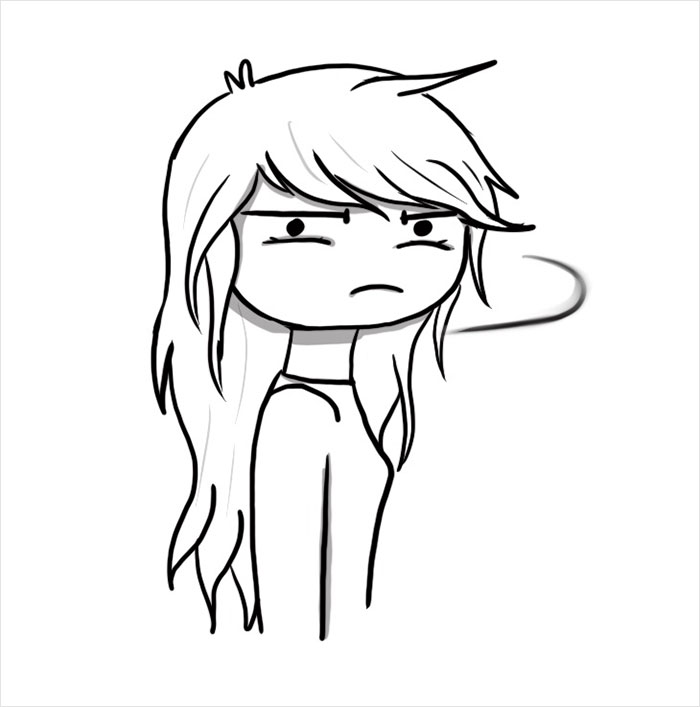 She realizes who the culprit is… 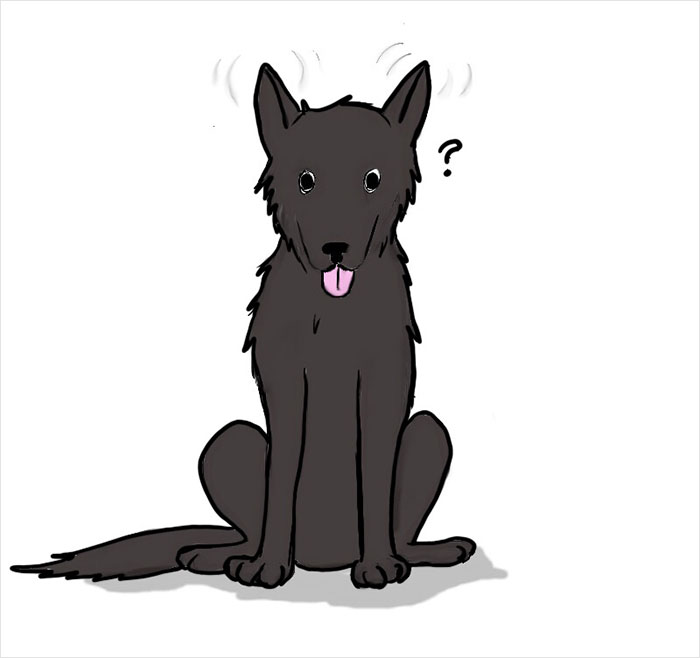 She wants to catch him red-handed 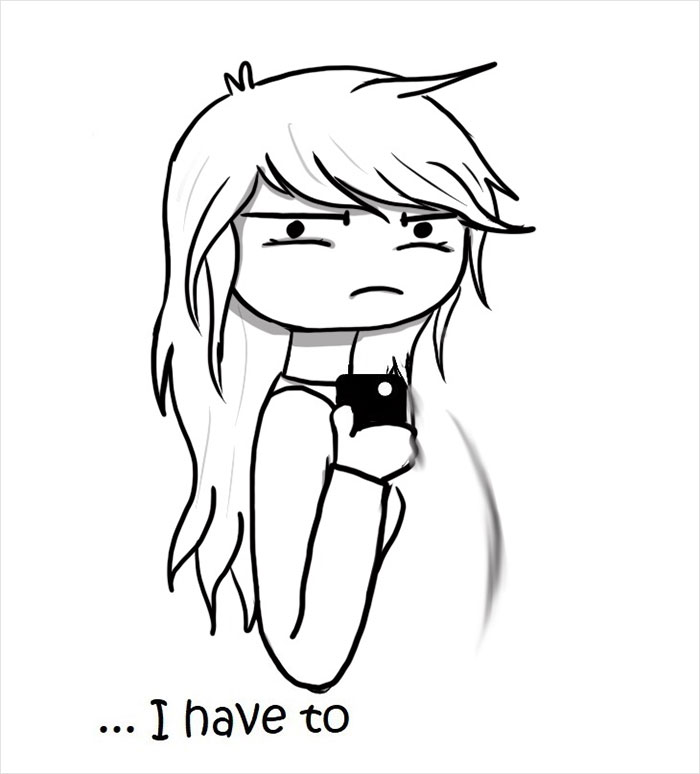 So, she shines a light on the situation … literally 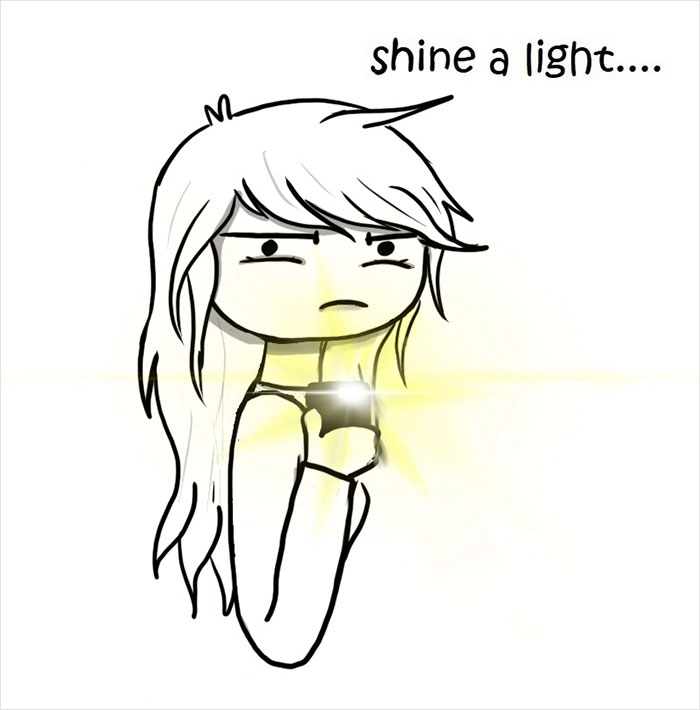 And there the cat is, hiding in her favorite hiding spot 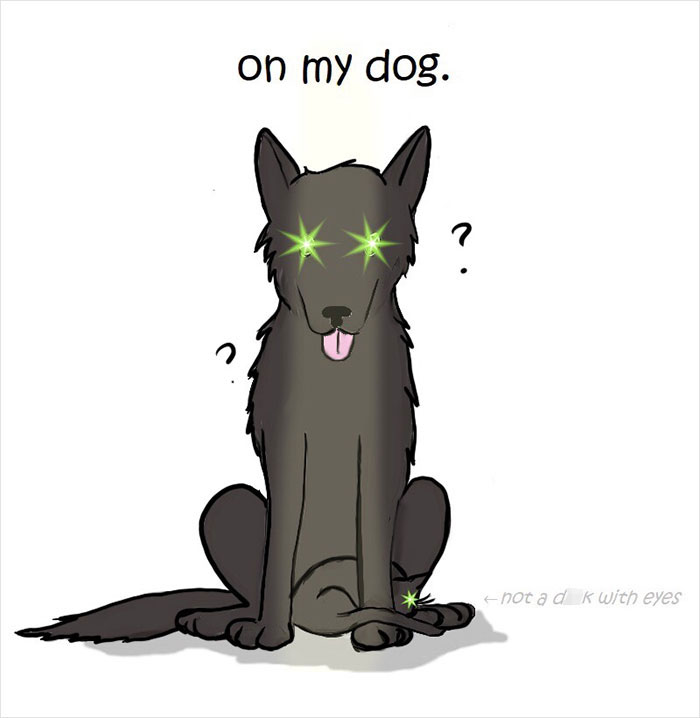 Ristay says, “I drew this comic one day when I couldn’t find Petunia and I had looked everywhere, I was truly at my wit’s end. Eventually, I found her curled up under Atreyu’s tail with her eyes closed so I couldn’t even see the reflection of her eyes!”

Petunia has loved to cuddle with Atreyu ever since she was a little baby. Atreyu, the German Shepherd enjoys it just as much as Petunia does, given his past. The German Shepherd has been through some traumatic experiences as a little pup, being abused, beaten, and even malnourished. He loves the affection and cuddles Petunia offers him and they can mostly be seen together. The owner was skeptical about what his nature would be like when she first rescued him but he turned out to be the perfect dog. He is very caring and loves all of Ristay’s cats.

Ristay shares some pictures of Petunia and Atreyu together at different places around the house. Ristays everyday struggle in looking for her cat can easily be understood just by a single glance at these pictures.

If it weren’t for the cat’s legs and tail no one could’ve ever imagined this picture contained more than one pet. 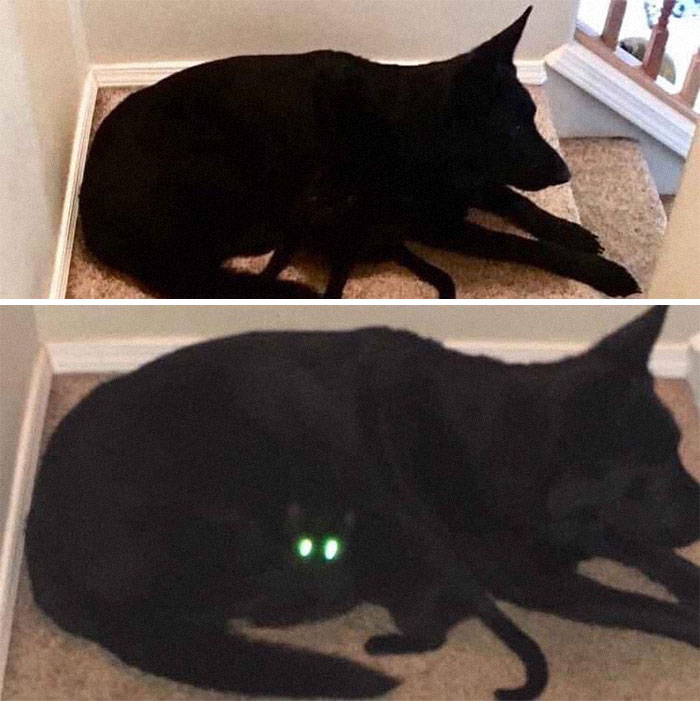 The cat’s unamused stare tells you how much she hates the fact that she’s been found at her favorite hiding place. 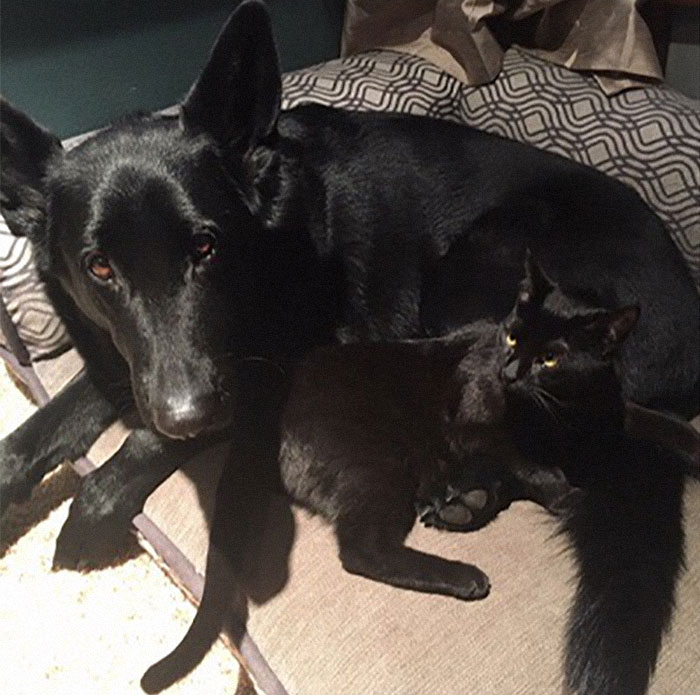 The dog seems to be holding the cat in a similar way to how humans hold their children. 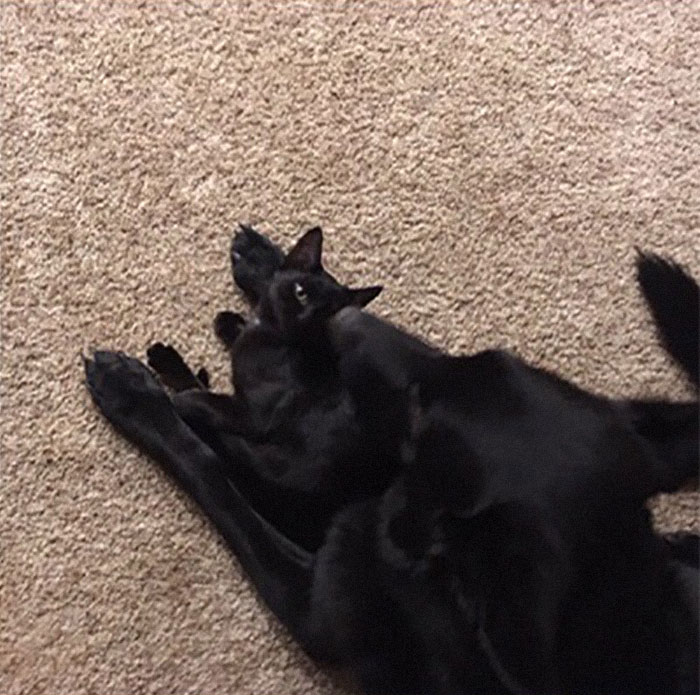 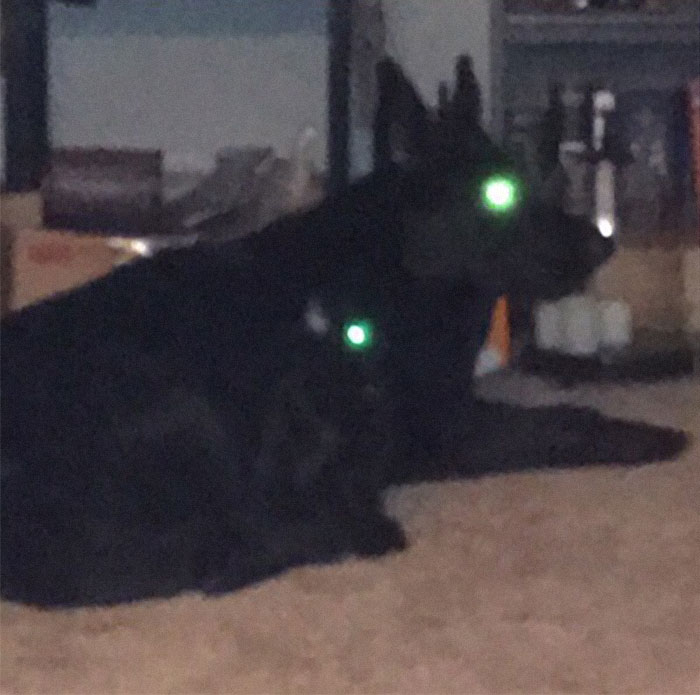 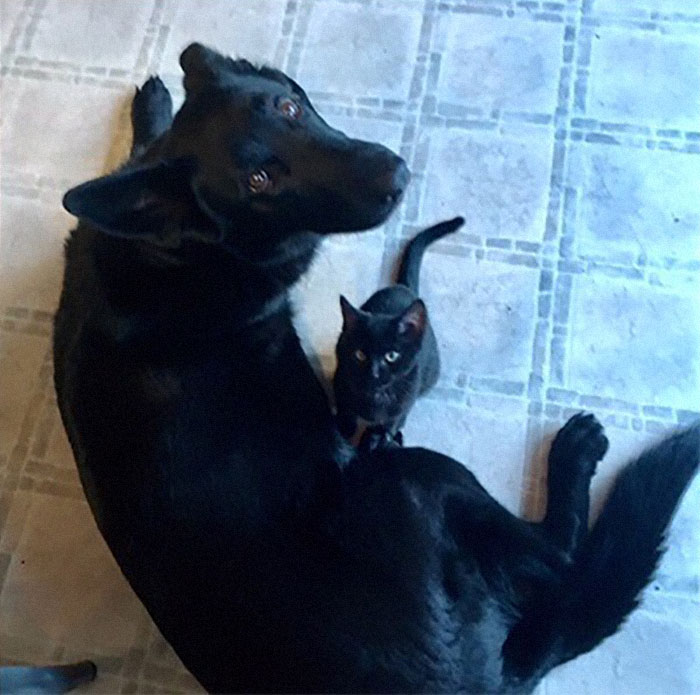