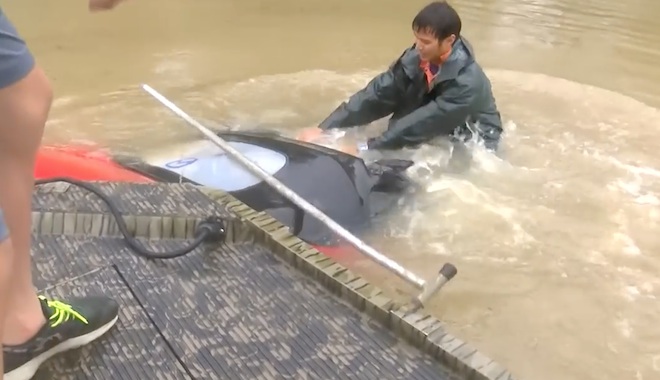 A woman was seconds away from drowning when rescuers came across her convertible car sinking under the floodwaters in Baton Rouge, Louisiana. Footage of the dramatic rescue, which took place on Saturday afternoon on August 13, 2016, show the men frantically trying to find something to tear open the top of the car.

In the video’s audio, you can hear the woman from inside the car cry out “Oh my God I’m drowning!”

One of the men, reportedly named David Phung, drops into the water and pulls frantically at the roof of the car to tear the material open. It’s a tense few seconds as the water covers his shoulders. Suddenly he’s got the woman’s arm and is pulling her out of the submerged vehicle.

As soon as her head is above water, she tells the men there’s another passenger in the car….”Get my dog, get my dog!” Phung tells her “I can’t get your dog…” He tells her that he thinks the dog is gone. “No, she better not be,” the woman says. He tries again and suddenly a white, little dog appears in his arms. He somehow managed to get her!

What a heart pounding rescue! Share these heroes with your family and friends!