UPDATE: Donations From Across the Globe Save Cat No One Wanted to …. 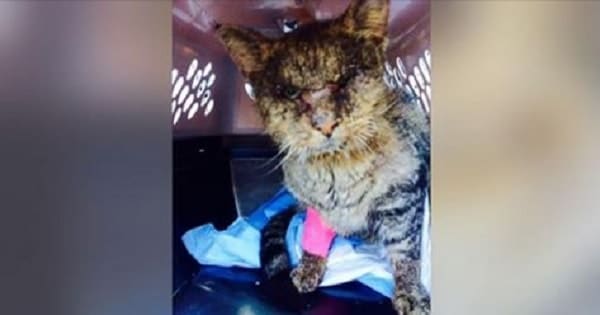 CALIFORNIA – What might have been a routine visit to her local animal shelter turned into a very emotional experience for a woman named Elaine Seamans.

A stray cat who had recently been brought to the shelter stopped Seamans dead in her tracks as she walked past his cage.

“I saw about four dogs who needed help, and then I saw him,” Seamans, who runs the At-Choo Foundation, which is a nonprofit that provides dogs with medical care, explained to ABC News. “We don’t normally help cats but there’s no way I could walk past him.”

The emaciated cat somehow managed to muster up a faint “meow” and turn toward Seamans.

“He reached out and so I picked him up,” she stated. “He was so thin and he was so weak and he just put his little head on my shoulder.”

What Seamans had no idea of at the time was that the cat was suffering from a highly contagious sarcoptic mange, which is a condition that requires handlers to wear protective gloves. She went on to explain that she doesn’t regret the risk she took that day.

“There was no way I could leave him here to not get help,” Seamans stated.

Seamans knew the cat, who is named Valentino, was in terrible shape. She texted her friend Toby Wisneski, who is the CEO of Leave No Paws Behind, a nonprofit that specializes in extreme medical cases and terminally-ill animals.

Wisneski immediately responded and showed up at the shelter shortly after. She promised Valentino would receive the very best care possible.

“I heard his tiny little meow and that sealed the deal,” Wisneski went on to say to ABC News.

All thanks going to these women, Valentino is now recovering under 24-hour care. In addition to the sarcoptic mange, Valentino also suffered from low glucose levels, infections that left his eyes swollen shut, dehydration and possible gastrointestinal bleeding.

However, Dr. Michelle Dulake, who is a veterinarian at The Pet Doctors of Sherman Oaks who has been overseeing Valentino’s care, explained that he is well on his road to recovery.

“I do think we are optimistic, and as long as his glucose goes up and his bacterial infections go away, I think he’ll have a really good life,” Dulake said to ABC News. “He’s the sweetest, sweetest cat. I think it was a really great find for Leave No Paws Behind. They did a great job finding a cat that has the potential to live a long and happy life.”

The support Valentino has received from the public at large after she began sharing his story has been overwhelming, Wisneski stated.

“The people have been just amazing,” she recalls. “We’ve received donations from people in Sweden, Australia, Austria. Who knew? We were just doing what we normally do — help those that can’t help themselves and the ones that nobody wants.”

She continues to post updates on Valentino’s status right on her foundation’s Facebook page, which is still receiving generous support.

“He’s the sweetest little guy,” Wisneski, who named the cat in honor Valentine’s Day, stated. “He’s an internet sensation, he’s got a fanbase that is unbelievable, and we’re taking it one day at a time.”