Two Kittens Become Friends With Horses After Playing In Their Hay Net! 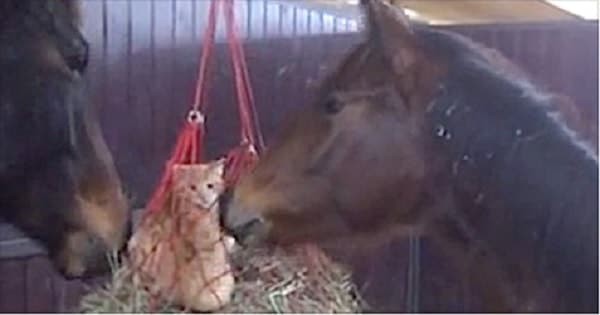 CANADA – This unique friendship began when the pair of 20-week-old cats started climbing on their equine counterparts’ hay net at a farm located in Alberta, Canada.

“At first they were quite wary of the horses at our busy breeding farm,” the animals’ unidentified owner told video site called Newsflare. “However, their constant desire to play in the hay nets has made them pretty confident.”

The video clip shows the two sibling kittens, whose names are Donald and Justin after U.S. President-elect Donald Trump and Canada’s Prime Minister Justin Trudeau, sitting and clambering all over the net as the horses tenderly nudge each of them with their noses.

“Every night the hay net is hung Donald and Justin swarm the hay net for some epic battles,” the video uploader went on to add.