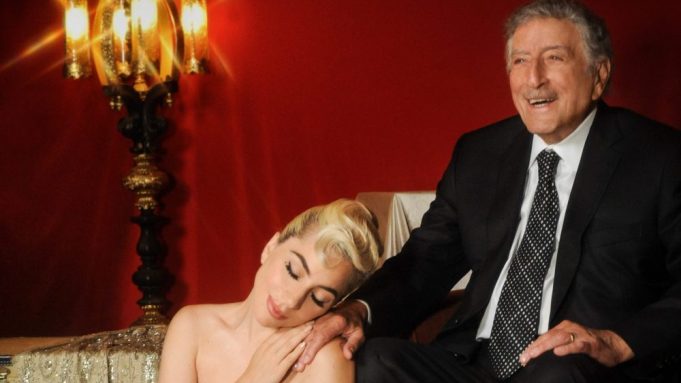 With two sold-out Radio City Music Hall dates behind them, the pairing of the Tin Pan Alley crooner Tony Bennett and award winning duet partner and pop icon Lady Gaga reveal the first video from their Cole Porter tribute album, “Love for Sale,” the jazzy classic, “I Get a Kick Out of You.”

In February, it was revealed that Bennett had been diagnosed with Alzheimer’s five years prior and these Radio City dates were billed as Bennett’s last New York shows.

The “I Get a Kick Out of You” video was filmed during recording sessions for the “Love for Sale” album at Electric Lady Studios in downtown New York City. Dapper in a blue suit and tie with a thin, debonair mustache, Bennett’s familiar raspy voice is in full effect as he snaps his fingers, lends several thumbs up to the instrumental proceedings and winks at his singing partner, Gaga.

From there, Gaga begins to slowly trill the familiar line, “My story is much too sad to be told, but practically everything leads me totally cold.” When Bennett answers her call, by “fighting vainly the old ennui,” followed up by “Then, I see your fabulous face,” Gaga, jokingly asks Bennett, “Are you talking about me?”

That’s when the ensemble picks up, the roaring big band arrangement commences, and things truly percolate to the rhythm of the video’s quick paced edits. As the song ends, with both vocalists singing in harmonic union, Bennett simply adds, “Whoa,” at “Kick”s finale.

The collaborative “Love for Sale,” album, to be released on October 1,  and billed as Bennett’s final recording, is the second album from the duo, following their 2015 chart-topper “Cheek to Cheek.”

The Porter tribute album will include duets as well as solo selections from both Bennett and Gaga, and the “Love for Sale” cover graphic includes a photo of the Bennett holding up a sketch of Gaga in accordance with his other job as a visual artist.

The first night of the Radio City Music Hall date, August 3 – coinciding with Bennett’s 95th birthday, an audience rendition of ‘Happy Birthday’ was led by Gaga — was filmed for broadcast of a yet unidentified nature.