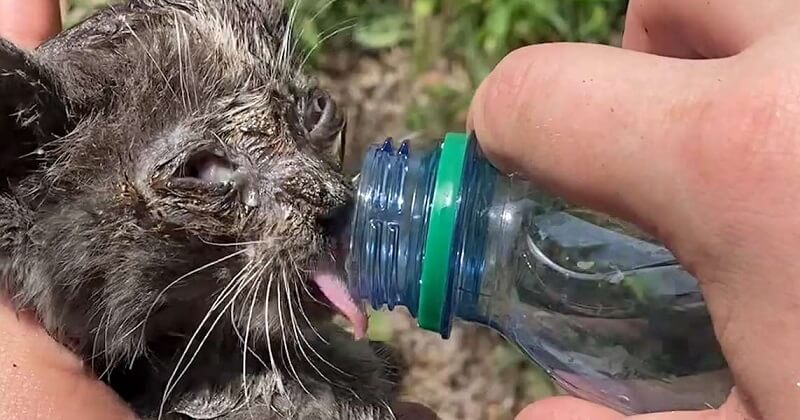 It was already a super, super hot day in Texas. Plano Animal Shelter received a call about a kitten being in a storm drain. After that, an animal rescuer named Mary quickly went there to save the poor animal.

When Mary got over to the ledge, all she could see was concrete. It was a deep tunnel she had gotten herself in. Despite being difficult to save the kitten, Mary didn’t give up. After all efforts, she finally got the kitten out safely. Mary didn’t want to leave the kitten, so she brought her home to foster and named her Pennywise.

“She was just, like, limp. I started, kind of, pouring water in her mouth and she was lapping it up like a dog. Which I’d never seen a cat do. She came to, and that’s when I could breathe again. The whole team was in action. We got fluids in her. She instantly was perking up. It was just a relief,” Mary shared.

Mary has a dog named Sawyer, who does not like a lot of visitors. However, he really loves cats, especially kittens. For this reason, he instantly fell in love with the rescue kitten. Pennywise’s personality came out, especially when she met Sawyer.

“They have a really sweet relationship. He kinda nursed her in his own little way. For being a little 2-pound kitten, she held her own around my 50-pound dog. It made sense that she held her own in that tunnel. She just has a lot of gusto,” Mary said.

Watch the full rescue in the video below:

Mary wasn’t quite ready to leave the kitten, but she had to let her go. And a few weeks later, she got adopted! Mary and all animal rescuers from Plano Animal Shelter are so happy for Pennywise!

Cute little Pennywise. Thank you for caring enough to get her out of the storm drain. If you love this post, please share it with your friends and family members!