Tiger Shark With a Tuna Stuck in Its Mouth 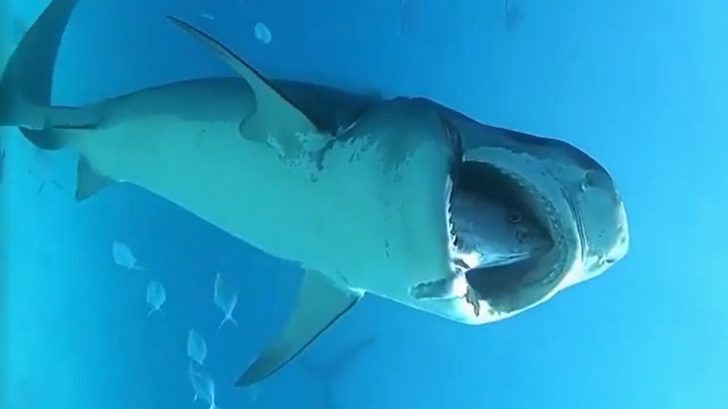 A massive tiger shark with a tuna lodged in its mouth was caught on camera in some incredible — and unusual — footage from the big blue.

One marine biologist commented that it is likely the shark is “being full and lazy. The crush force of his bite is PLENTY to crush the tuna skull…it just doesn’t want to yet.”

Another possible explanation is that there may have been a fishing hook associated with the tuna, and the fish became lodged in the shark’s mouth along with the hook.

One study conducted in Tahiti found that nearly 40 percent of all tiger sharks in the region had fishing hooks embedded inside their bodies, or had one or more attached to their skin.

Longlines, fishing lines which extend for miles, are commonly used by fishermen to catch profitable fish like tuna and swordfish. On them, a single fishing line is cast out with anywhere from several dozen to several thousand hooks on it. When sharks chomp on a fish attached to one of the lines, they can sometimes break free; However, this leaves many of the predators with corrodible or stainless steel hooks embedded in their skin, mouths, and possibly even their stomachs. This can lead to serious health problems, like necrosis and internal bleeding.

Some stainless steel hooks can stay embedded for at least 7 years, possibly up to a lifetime; corrodible hooks are generally shed within 2.5.

We can only hope that this shark was being lazy, and there were no fishing hooks involved.