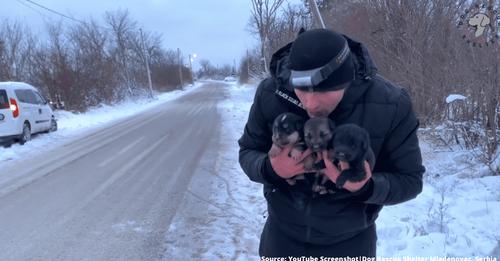 During the unforgiving winter months of Siberia, a homeless dog named Hera gave birth on the streets. The poor soul knew she would have to struggle to feed her delicate puppies and keep them warm with the blizzard raging on days on end. Ultimately, she found a cold and wet drainpipe by the road and decided to crawl inside with her pups to seek refuge from the chilling snow.

But the abandoned dog’s distressing ordeal wasn’t over yet. She knew her babies would not survive the cold months if not for human intervention. As the pups grew sicker, Hera become more anxious, dashing out of the pipe every time she heard a vehicle pass by. All she wanted was for someone to help keep her babies alive.

But unfortunately, people could not be less bothered by her predicament, according to iheartdogs. Thankfully, there were some concerned travelers who noticed the helpless dog and reached out to a member of the Dog Rescue Shelter Mladenovac. Thus, one day a man named Milan set out into the stormy roadways to rescue Hera. 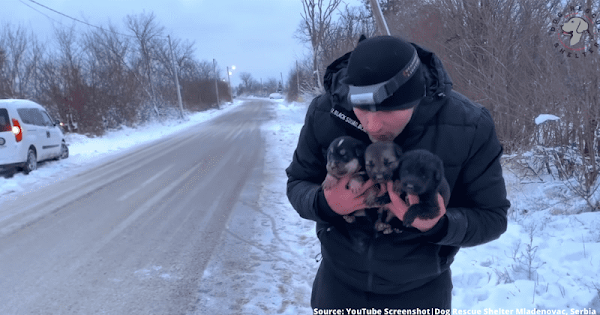 Although most of the pipes in the area had been covered in snow due to the ongoing blizzard, Milan was able to track down the mother and her pups with the help of her paw-prints. In a heartwarming video, Hera can be seen running out of the pipe right after hearing Milan’s footsteps approaching her temporary residence.

While the man was ecstatic to locate Hera, he was heartbroken to see that her 4-weeks-old puppies were soaked and shivering in the pipe. But getting the pups out of the uncomfortable boarding turned out to be a rather difficult task as they weren’t used to humans, unlike their mother.

Despite his assurances, they refused to budge and Milan knew he had to them out quickly as it was getting dark. He knew this was going to be an extensive rescue but despite knowing the effort involved, he never once turned his back on the scared puppies.

Even as the weather worsened, he remained by the road until the pups were out. First, he let Hera enter the pipe hoping that her pups would follow but that didn’t work. Next, he put out some food, hoping to lure them out but ultimately, he got the put using a tool. With patience and care, Milan was finally able to reunite the babies with their mom who couldn’t have been more grateful for his help.