The life of Howard McNear, famous for the role of Floyd the Barber on The Andy Griffith Show 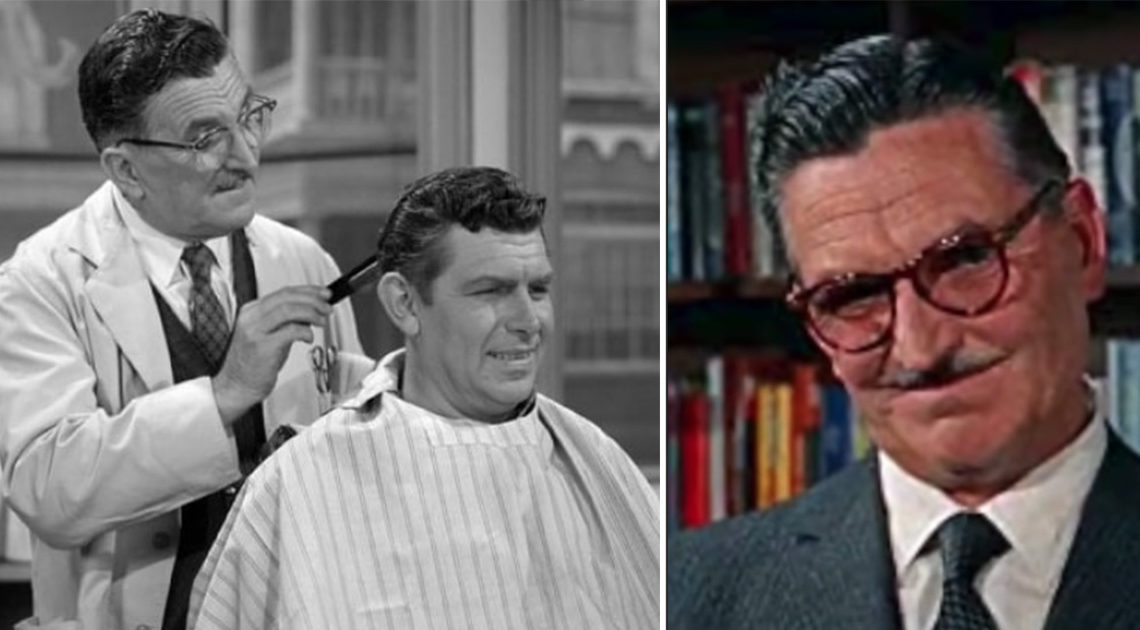 The Andy Griffith Show is one of many iconic American television series. The question may even be if it’s not the all-time greatest? After all, many amazing actors and actresses starred in the series.

Today, we’re going to take a walk down memory lane to take a look at the life of Howard McNear.

The iconic actor starred as Floyd the Barber, and his time on the show sure was a success. Eventually, a stroke forced him to quit, but Andy Griffith himself forged a plan to get McNear back: This is the story of Howard McNear!

Few American television shows got the same amount of recognition as The Andy Griffith Show. Airing for the first time in 1960, the comedy series was an instant success. Still to this day, it’s considered one of America’s all-time best shows.

All told, a total of 149 episodes of she show aired. When it ended in 1968, it was still the number one show in America. Among the many great actors and actresses involved with the show were Andy Griffith, Don Knotts, George Lindsey, Frances Bavier and Ron Howard.

But one who’s often forgotten is actor Howard McNear, who starred as the wonderful Floyd “The Barber” Lawson.

Howard McNear had a career that differed from many actors of his time. Having started his long and successful career by doing radio shows, he switched to the world of television and became a great actor on-screen as well.

Yet McNear’s run on The Andy Griffith Show also included plenty of drama and tragic events, including a stroke that forced him to quit the show.

But Andy Griffith was keen on having him back in the fold, and did something no one ever could’ve expected.

One thing’s for sure: Howard McNear had an extraordinary career.

Born in Los Angeles on Jan 27, 1905, McNear knew that he wanted to work in show business. He initially studied at the Oatman School of Theater and moved to San Diego, where he joined a stock company. At the same time, McNear had grow fond of radio and started working with it in the late 1930s.

He actually began as a sort of action figure, distinguishing himself in the radio show Speed Gibson of the International Secret Police, starring as the ace operator Clint Barlow. It was one of several aviation-themed kids’ shows during the 1930s and 1940s.

Yet for McNear, the show wasn’t really it. He was a great radio actor portraying an action hero, but oftentimes, his characters would lean towards comedy.

In 1942, McNear enlisted as a private in the U.S Army Air Corps, and during this time made sure to keep his acting on top, creating the role of Doc Charles Adams for the CBS Radio show Gunsmoke, which aired for the first time in 1952. Since it was on CBS, McNear got a contract with the big network. It was during the 1950s that he was featured in several of CBS’s radio shows and television programs.

Oftentimes, he portrayed funny, comedic characters, and one of the greatest ones was in the radio detective series Yours Truly, Johnny Dollar.

So how did McNear get into television? Well, he actually made his debut in 1951, having an uncredited role in the sci-fi film The Day the Earth Stood Still. During his long career, McNear starred in more than 100 film and television guest spots. It was in 1958, however, that he got a part that changed everything.

McNear first guest starred as the barber Andy on an episode of Leave It To Beaver in 1958. Just three years later, he got the part of another barber, but this time, it was a bigger role.

McNear became a household name as the barber Floyd Lawson on The Andy Griffith Show. And his performance was scene-stealing.

The Andy Griffith Show wasn’t the only show focusing on comedic and lighthearted country characters in the 1960s. It was part of a pretty definitive trend, though when it aired, it was received different to other shows. Not only that, but the series birthed to two separate spin-offs, Gomer Pyle, U.S.M.C. and Mayberry, R.F.D.

The show took place in the fictitious town of Mayberry, North Carolina, and centered around the life of Sheriff Andy Taylor (portrayed by Andy Griffith) whose common-sense approach to life became a wonderful setting for the show. It played upon popular stereotypes surrounding people living in smaller towns.

In regard to several favorite characters, McNear would grow into one of the funniest and most loved characters in the show. But one mystery remains to this day: Was he based on a real person or not?

Mayberry itself was based on Andy Griffith’s real hometown. This was a factor that let to many viewers believing that Mayberry was a real place.

In his hometown of Mount Airy, North Carolina, Griffith was said to always get his hair cut at one particular barbershop.

Russell Hiatt was the man who cut Griffith’s hair for almost 70 years, and he is thought to have been the inspiration for the iconic character Lloyd Lawson on The Andy Griffith Show.

But is this all true?

“No one can know for sure at this point,” Jim Clark, co-author of The Andy Griffith Show Book, said. “I’ve heard Russell tell folks that he remembered cutting Andy’s hair during the time frame of his trips home during college, which circa 1944 would fit.”

He added: “I don’t know if Russell also cut hair other places in town — such as Palace Barber Shop, which Andy frequented — before settling into the City Barber Shop.”

Following the show’s great success, Hiatt’s barbershop on Main Street in Mount Airy became a popular tourist attraction, as fans gathered to celebrate and remember the show. In 2006, Hiatt passed away, age 92.

“In any case, Russell did not cut Andy’s hair on a regular basis,” Clark said. “As to whether Russell actually cut Andy’s hair once or twice, with a lack of clear documentation one way or the other — and of course, why would there be for an 18-22 year-old’s routine haircuts circa 1944? — I go with Russell’s recollection of seeing Andy in the shop and the assumption that he cut his hair a time or two.”

Clark added that he thinks the writers, as well as Andy, pretty much just brought their own experiences to the table regarding the part of Floyd, and not specifically Hiatt.

However, they knew that the barbershop was going to be a very important place in Mayberry, since it was a place where people normally conversed with one another.

Walter Baldwin portrayed Floyd Lawson in one episode, which was the character’s first appearance in the show. After that, Howard McNear took over, and it became a huge success.

“His portrayal isn’t necessarily the show’s original vision of Floyd, but Howard McNear certainly ended up being the right one to play Floyd,” Jim Clark stated.

“Just as Russell may not originally have envisioned himself as Mount Airy’s version of Floyd, but he definitely ended up being the perfect one for that role, in his own eyes and in the eyes of thousands of Mayberry fans who visited his shop!”

Working on The Andy Griffith Show was something very special. The cast became like a family, and in a 2010 interview, George Lindsey – who starred as Goober on the show – spoke highly on working with Andy Griffith.

According to him, they were the best acting ensemble on TV.

“He was a great leader and the best script constructionist that I’ve ever worked with. And he was easy to work with,” Linsey told the Huffington Post on working with Griffith.

“If you knew your lines, that’s all you needed. And I worked with another guy that was brilliant and that’s Don Knotts. They were terrific professional actors, and I was honored to be in their company.”

It’s rare to having your big breakthrough at such an age, but Howard McNear was 53 years old when he starred as Floyd the Barber in The Andy Griffith Show.

Floyd the Barber became a loved character by both the cast and viewers. According to pop culture historian Geoffrey Mark, McNear’s character was vital for the show’s success.

“If you watch all the episodes like I have hundreds of times, Floyd the Barber really permeates Mayberry,” he told Closer. “A lot of Mayberry’s attitudes get revealed through him, because that barbershop was kind of the center of town for the men to gossip in. And there were almost as many scenes in the barbershop as there were in Andy’s office.

“People just hung out there, so whenever anything happened in town, any storyline where something was going on, there was always a scene at Floyd’s where they discussed it.”

McNear’s career was flourishing. Sadly, in 1963, he suffered a massive stroke which forced him to leave the show. Afterwards, he had trouble using his arms and legs. But the cast – especially Andy Griffith himself – loved him too much to just let him go.

It was then that Andy Griffith did one unthinkable – but also very loving – thing in trying hard to get McNear back on the show. Griffith even called McNear’s wife to tell her it would be a good thing for him to get back on the show.

How? Well, the producers on The Andy Griffith Show made sure that Floyd the Barber mostly sat down during his scenes.

According to a newspaper column from 1976, when McNear had to stand it was with “the aid of a special jig the men in the crew built for him.”

Howard McNear – cause of death

“Sitting or we built him a stand that supported him,” Griffith said, as quoted by Cheatsheet. “He could then stand behind the barber chair and use one hand. His mind was not affected at all.

“We did a lot of soft shows after McNear’s stroke, that is, those that were not hard on comedy – stories about the boy or the aunt,’ Griffith added.

“But we needed comedy scenes to break up things.”

So, Howard McNear came back to The Andy Griffith Show, often sitting on a chair outside his barber shop. However, two years later, he had another stroke.

“He was with us about two years after that before he died,” Griffith recalled in Richard Kelly’s 1981 book The Andy Griffith Show. “Finally poor Howard died. I’m sorry because there was never anyone like him. Kind, kind man.”

Jack Dodson starred as Howard Sprague on the show. He remembered the scene that would be McNear’s last, which was difficult to watch.

“Sadly, it was during the playing of a scene with Howard that we realized he couldn’t go on anymore,” Dodson said. “He couldn’t remember his lines. He went over and over it, frustrated with himself. Seeing his despair and anxiety was the most painful experience that I’ve ever had. Ever. And then he didn’t come back after that.”

Most of the cast members attended McNear’s funeral. He was buried at the Los Angeles National Cemetery, California. The show’s producer Richard Linke described it as “the only funeral I’ve ever been to where the laughs exceeded the tears … Oh, he was a nice man.”

We will always remember Howard McNear as one of the most wonderful comedy actors in television history. Let’s honor him by sharing this story with friends and family!