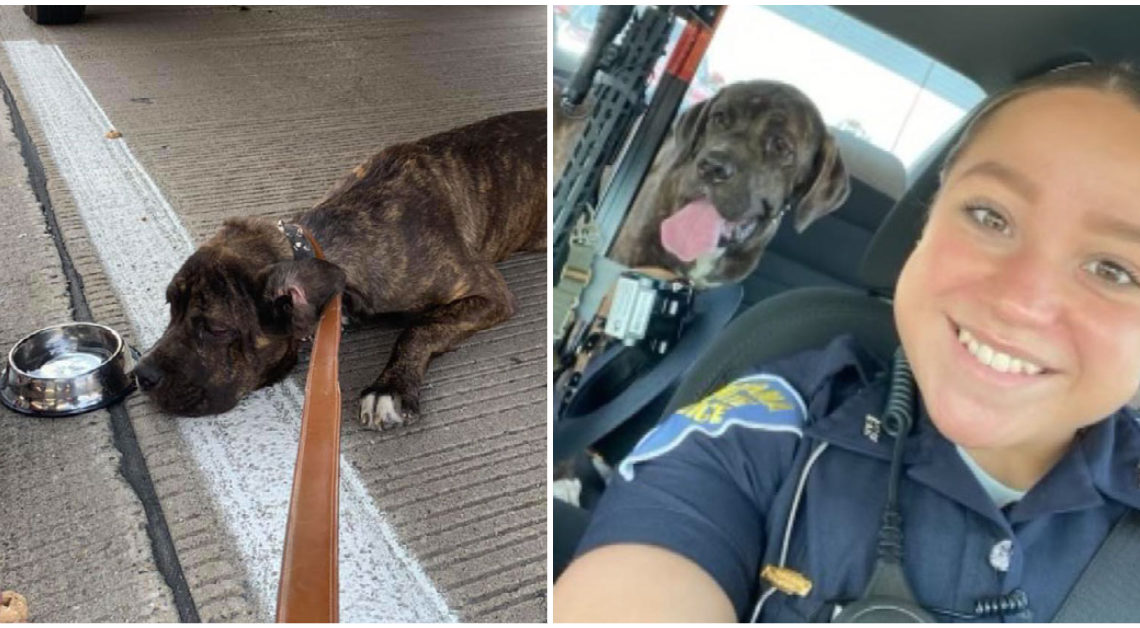 There are some heartless people who just abandon their dogs, leaving them behind in dangerous situations without caring what happens to them.

That was the case for one poor dog, who was abandoned on the interstate by her owner and was helplessly stuck in the middle of heavy traffic — until one caring state trooper had the perfect plan to get her to safety.

On Sunday, Indiana State Police trooper Allison Marlowe discovered an unusual traffic jam on the I-65. She looked to see if there was an accident — but soon found out the jam was actually the result of a dog.

A large puppy had been seen running in and out of traffic, causing the cars to come to a standstill in all three lanes. The dog was now hiding underneath a camper, scared by the whole ordeal, according to The Times of Northwest Indiana.

How the dog ended up on the interstate in the first place was even sadder: the dog had reportedly been abandoned by her owner.

“Witnesses reported a van was seen dumping the dog off on the side of the highway,” Indiana State Police wrote on Facebook. “She shows signs of neglect and is very skinny.”

There’s no doubt that the dog was scared and confused by the whole ordeal, and needed a little love and kindness. Luckily, Trooper Marlowe is a self-described “huge dog person,” and was the perfect person for the job.

While bystanders had been unsuccessfully trying to coax the dog out from under the camper, Marlowe happened to have the perfect trick up her sleeve: a bag of dog treats.

“I would not say every [trooper carries dog treats] but there’s a good amount of them that do,” she told the Times. “I’m like, ‘dogs are going to be persuaded with food’ so I got some treats, a collar and a leash … and it came in use [Sunday].”

Her plan worked. With the help of her bag of Pup-Peroni dog treats, and the aid of a group of bystanders, she was able to coax the dog to safety.

Marlowe got the dog into her patrol car and took her to Lake County Animal Control. The neglected pup happily continued to snack on treats during the ride, according to the Times, finishing the whole bag.

The trooper named the dog “Grace,” and she’s now finally getting the care she needs — and will hopefully have a new, better home soon.

“She has been … placed at a local animal shelter for treatment and hopefully adoption to a happy forever home,” the Indiana State Police wrote.

Thank you to Trooper Marlowe for saving Grace! This poor dog must’ve been terrified, but with a little kindness she was able to get to safety.

We hope this dog finds a forever home soon!