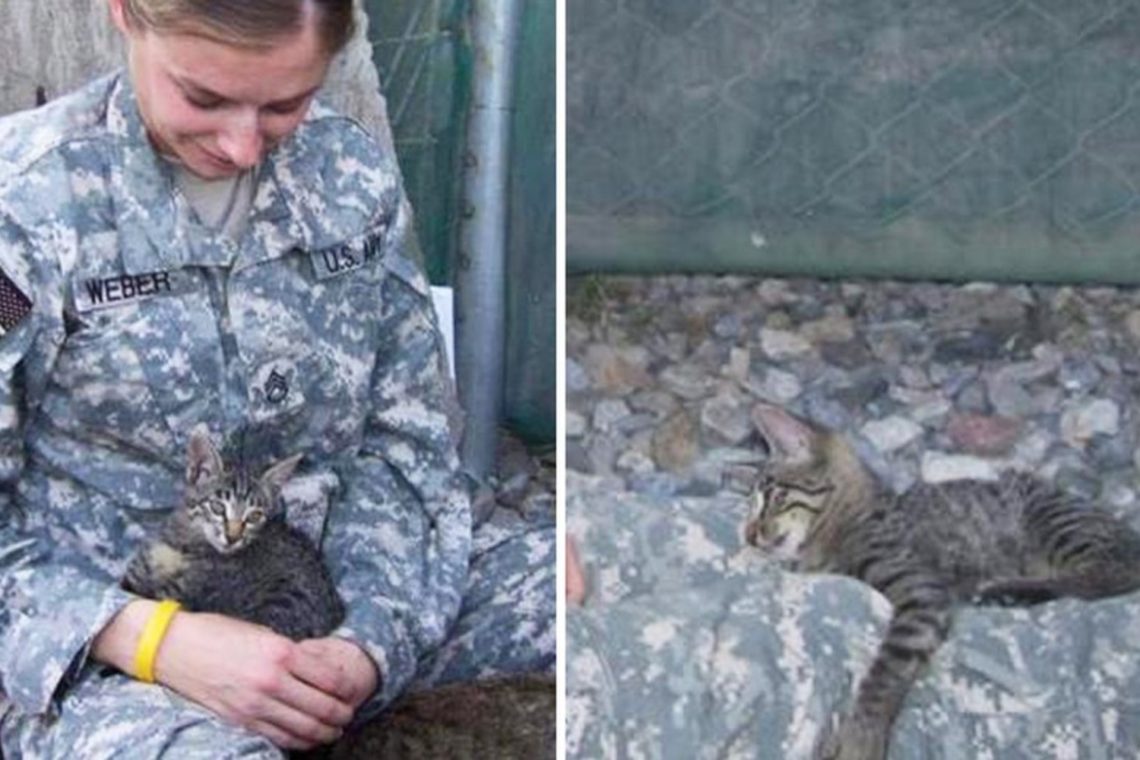 An Army soldier rescued a special little tabby kitten and refused to leave her behind.
It was back in 2008 when Christine Weber Bouldin first saw Felix, a special needs kitten that needed help. She was stationed at Bagram Airfield for her final deployment of her eight years of service in the US Army. 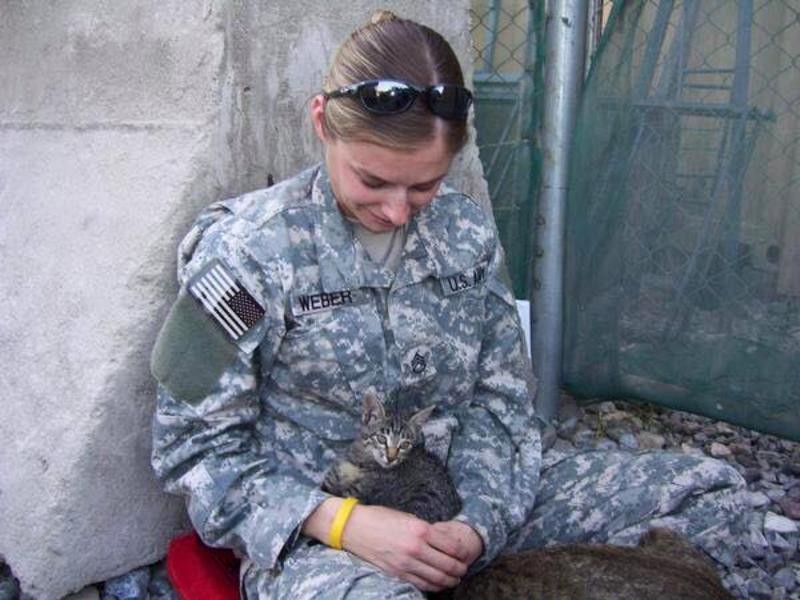 Christine has been a lifelong animal lover, she has even smuggled some hermit crabs in her pocket to keep her company. After being told a cat and her kitten were wandering around the base and people had been throwing rocks at them she made it her mission to go out immediately and find them.
What she discovered was the tiniest little kitten with ears that were half his body size that couldn’t walk without flopping from side to side.
“I’d never seen a cat like that,” she told People Pets. “I felt so sorry for her. She couldn’t stand up and would flip over.”
Little Felix had Cerebellar Hypoplasia (CH), a non-progressive disease that affects motor skills. She wobbles when she walks but is otherwise as healthy as a normal cat. 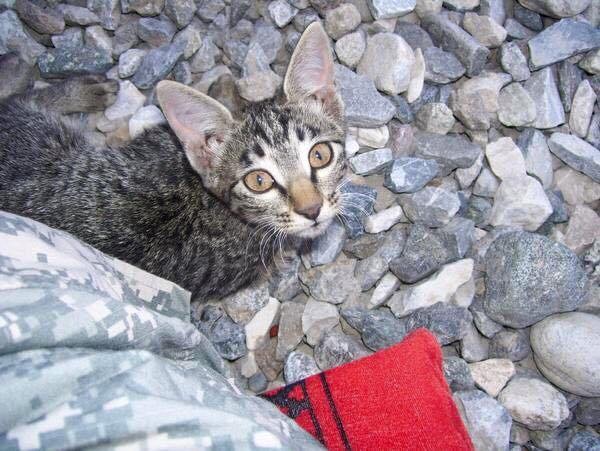 At first the kitten was fearful of Christine and would hiss at her as she approached. But as the mother began to show trust such as rubbing against Christine’s leg, little Felix slowly warmed up.
Christine would care for them daily by bringing them food and water a couple times a day. The kitten went from very skittish to letting her human friend hold her as she ate to keep her steady.
The furry family started to thrive and it was time for Christine to start thinking on how to get both kitties home safely.
Christine started wondering how she would be able to get both animals home, then that month the mother, whom she named Sandy, suddenly vanished and left her baby Felix behind. “After her mom took off, I worried someone would catch Felix or hurt her.” 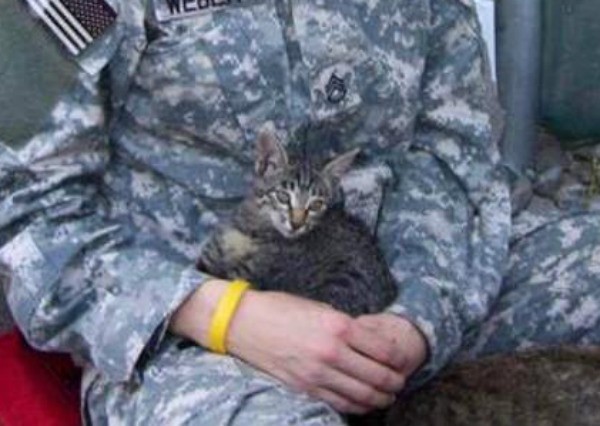 Because pets weren’t allowed, she and a friend made a makeshift home with sand bags for the kitten, but little Felix was too clever. “Even though she could not walk, she could climb up that sand bag wall and then fall out on the other side.”
A friend later constructed a little house for Felix where Christine would visit twice daily to look after her feline baby.
She brought cat treats and toys sent by her family from North Carolina. Every day she looked forward to spending some quality time with her best friend which became the highlight of her days.
They became inseparable, and Felix would give Christine the biggest hugs every time she went visit. “She was so sweet and I could tell she appreciated me taking care of her when her mom left,” she said. “She makes me cry sometimes still because she looks at me like I’m her mom.” 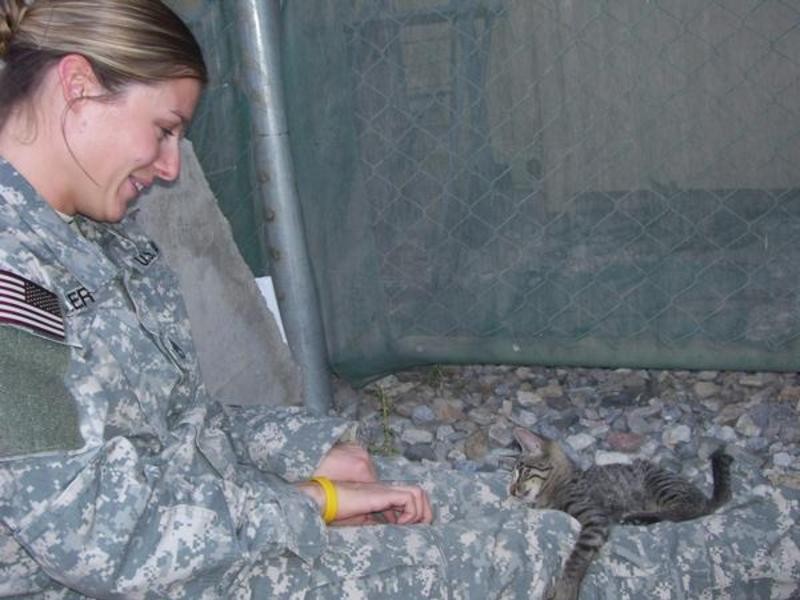 After being rejected to ride back to the States by the canine unit, Christine began feeling desperate without any available way to bring Felix home.
Then one day Christine’s luck changed, while she was getting Felix some shots, a veterinarian introduced her to an animal rescuer in Kabul that could help. With her renewed hope, she immediately contacted Pam Constable, who agreed to foster Felix in Kabul and eventually take her back with her to the US. 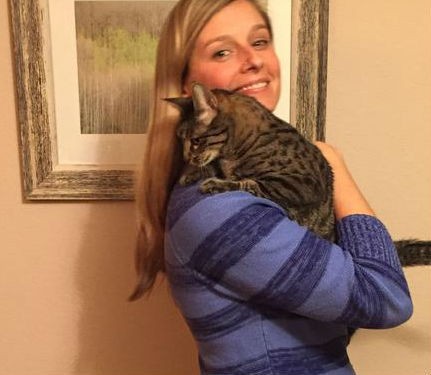 Christine paid a driver $300 to pick Felix up at the back gate of the base to bring Felix to Constable’s pet shelter in Kabul.
“It was a little over an hour to get to our base from Kabul, and you’re always in danger of IEDs … I was worried about her. I didn’t know if I’d see her again — if they wouldn’t allow me to bring her home. I’m pretty sure I cried,” Christine recalled.
Christine returned home in February 2009. She had to wait until the spring for Constable’s return to Virginia, paying close to $2,000 in shipping costs to fly Felix home. “I didn’t even care what I had to pay,” says Bouldin, “I would have probably paid more.”

She would have to drive five hours from North Carolina to get her cat. Felix was a bit skittish at first, Christine says, “But she warmed up to me fairly fast.”

As for Constable, “I knew I was going to miss her … But I was very glad she made it through all of that back to the person who had rescued her.”

It was quite the journey but Felix finally made it home safe!
She has even found a furry best friend to cuddle with every day. She calls them “two peas in a pod.” 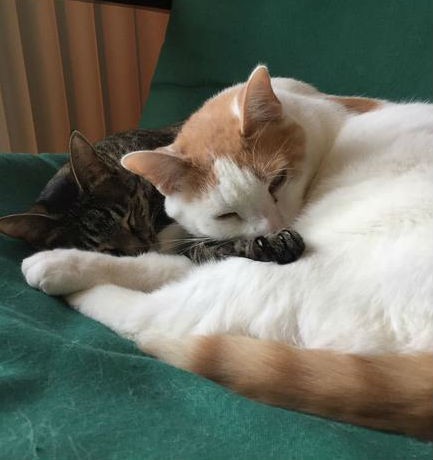 Despite being little wobbly, Felix can pounce, play, jump like any other cat. She can even use the litterbox with no problems.
“She found ways to do what she needed to do. It’s very inspiring to see an animal like that just fight to live because so many people underestimate them,” Pam told People Pets.
Christine says she can always count on her little Felix to lift her spirits just as she did during her deployment over and over again. They can always depend on each other, and now they will never be apart.
“She greets me, and her little tail vibrates because she’s so excited,” she said. “(Felix is) an angel sent to me from God.” 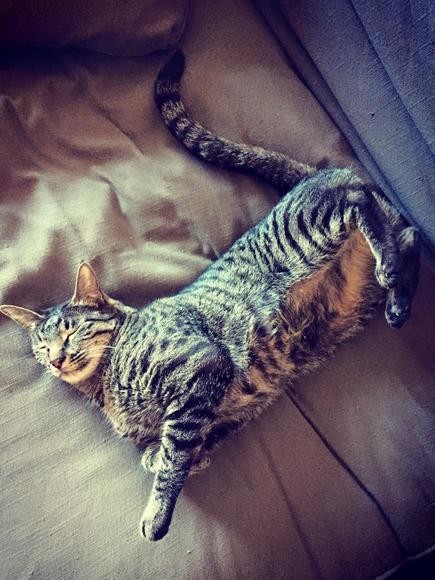