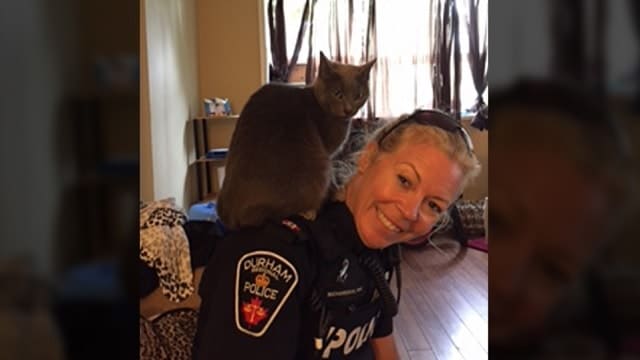 CANADA – A Toronto-area police officer who allegedly removed a kitten from the home of a drug user is now set to face a misconduct charge at a police hearing next week.

Durham Regional Police Const. Beth Richardson, who is a 17-year police veteran, has been charged with discreditable conduct under the Police Services Act, in connection with the incident, which occurred on Jan. 12.

According to a hearing notice obtained by CTV News, Richardson removed the kitten after being dispatched to an Oshawa, Ont. rooming house to check on the overall “well-being of a female who had been using drugs for several days.”

The notice states that Richardson noticed the kitten “cowering under a table” while in the drug user’s home.

In an interview with CTV Toronto Friday, Richardson’ lawyer Joseph Markson explained the kitten was “looking just ragged,” when his client came upon the pet.

“Really thin, very small, smelled like smoke, running eyes, and scared out of its wits.”

Markson went on to say that there was “no one around” the kitten in a position to take care of it.

According to the notice, Richardson removed the kitten without the owner’s prior consent or knowledge.

Richardson allegedly took the kitten to a veterinarian for a checkup where it was indeed “medically cleared.”

It is alleged that Richardson removed the kitten without advising any of her supervisors, and failed to document her “actions.”

Following the removal, the kitten’s owners called into the Durham police and “demanded the return of their kitten,” alleging “the theft of kitten was caught on tape.”

Afterward, the kitten was returned to its owner the same day, and Richardson has not been criminally charged.