Owl And Cat Are Best Buds 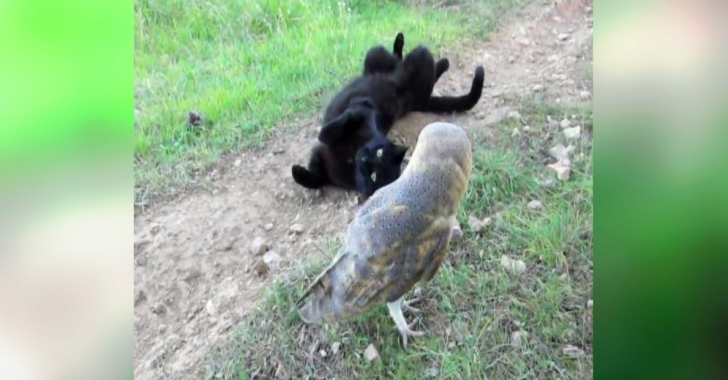 In learning about the circle of life, it is clear that there is a chain of predators and prey. There are animals that simply will not get along for the sake of needing to feed themselves and their young, with the attempt to continue their species: lions and zebras, frogs and flies, whales and krill, and bears and fish.

Even our domesticated felines display predator-prey behavior. Many even see their cats bringing them “presents” in the form of rodents, lizards, or birds. It is near-impossible to tame the desire to hunt in our beloved pets.

Unlike the majority, a Spain-born, pure-black cat by the name of Fum (“foom”) found a friend in someone that would otherwise be the perfect prey: an owl named Gebra.

In a video showcasing the innocent play between the two, Gebra flies around while Fum blissfully tries to stop her in flight. Fum is also shown jokingly tapping, circling around, and jumping to “catch” the bird. From their facial expressions, it is clear that the two friends are aware that each has no intention of attacking the other. They appear to have a strong and close bond that cannot be broken.

To backtrack, Fum was adopted as a kitten by his owner Jordi who houses and trains owls. Fum has always and continues to positively interact and show respect for the owls.

In regard to the friends, the owner states: “They have been able to show us, humans, that love, and friendship are the most valuable treasures we can [have].”

Besides the latter point mentioned, this unlikely friendship also informs us that it is okay to accept and befriend those who are different from us or who are otherwise meant to be our “rivals.”

It is clear to see that once the video was posted online, thousands have been intrigued by Gebra and Fum’s uncommon friendship.

To see the duo play in live action, check out the below video!