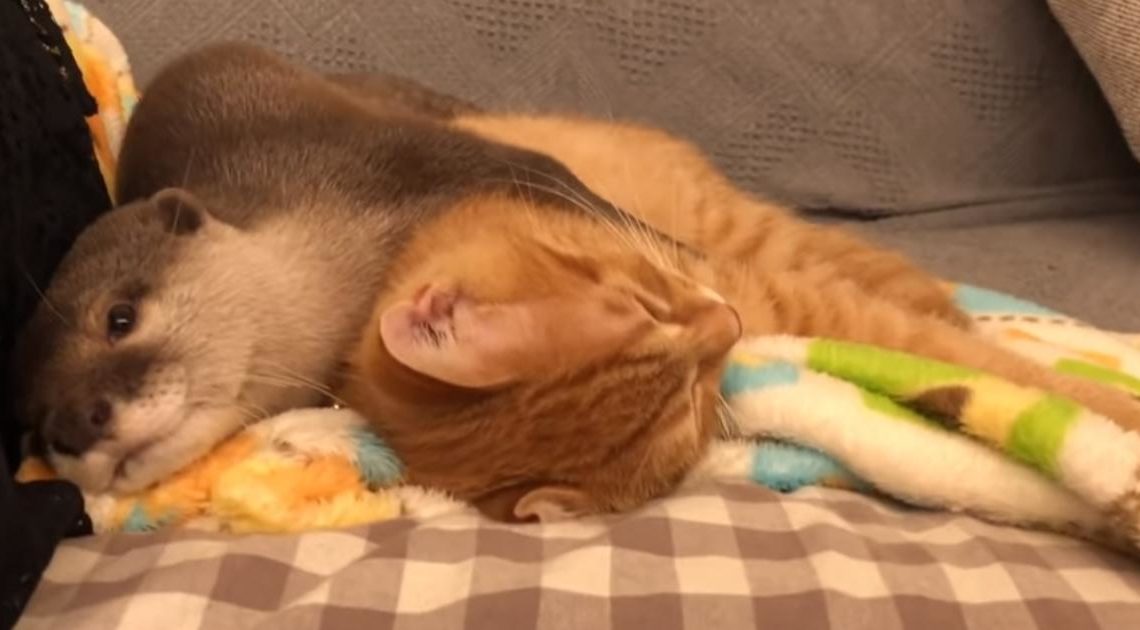 Sakura the otter’s bedtime ritual includes hugging his sibling, Mochi the cat, as seen in a video posted by their human on YouTube on July 18.

Everyone’s seen a kitten cuddle puddle at some point in their lives. Usually, this means that a litter of kittens—or even just cats raised in the same home—will sleep on top of each other. Typically, this is for warmth and protection and is a normal part of their daily lives, starting at birth and continuing throughout the course of their lives.

Otters, surprisingly, are relatively similar. In the wild, baby otters will sleep on top of their moms, wrapping their arms around them as they float through the water, as Treehugger tells. When they grow up, otters are known to hold hands with each other as they sleep to ensure they don’t get lost from their friends while they float. It’s a natural part of their lives and helps keep these creatures safe on a daily basis. 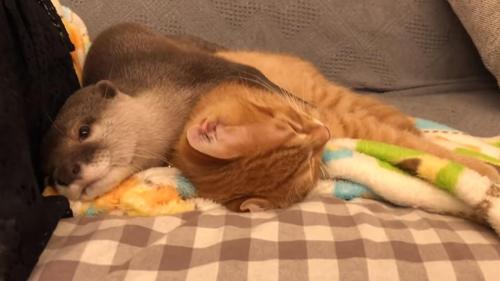 One otter, in particular, Sakura, was rescued by a human. However, adapting to a domestic life can be a little bit tricky, and it definitely takes some getting used to. However, Sakura doesn’t have to learn how to live domestically alone. In fact, he has a best friend that helps him feel warm and safe. That best friend is a very patient and sweet kitten named Mochi.

Mochi was fairly young when he met Sakura. According to Daily Mail, the owner Mako says that the two hit it off pretty quickly. They were both curious about each other, and it didn’t take them long to realize that they should definitely be friends. The two are known for playing with each other, hanging out around the house together, and getting into all sorts of trouble when their owner isn’t looking.

However, the one thing no one thought to expect was Mochi and Sakura’s bedtime routine. As a cat, Mochi is perfectly happy to spend most of his day napping, if you let him. Sakura has a little more energy and is known for staying up just a bit longer. However, once Sakura’s tired, he knows exactly what he needs to do to fall asleep comfortably. According to their owner, Sakura walked up to Mochi shortly after meeting him, and, having decided he was a friend, decided to give him a hug.

Like we said earlier, this isn’t terribly uncommon for otters, who value physical connection as a form of protection and safety in the wild. But no one expected Mochi to be so okay with it. Sakura walks up to Mochi, who is already soundly asleep. Without even the slightest bit of hesitation, he wraps his arms around the kitten, squeezing him just a little bit. This causes Mochi to stir just slightly, but he’s clearly not bothered. He lets out a yawn and settles back in, with Mochi snuggling against him happily. 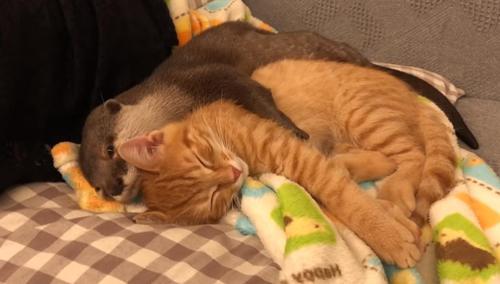 After a few minutes of cuddling, Mochi is back asleep again, and Sakura is not far behind. The two are clearly comfortable with each other. Since cats are so used to snuggling in the wild, it must seem relatively normal for Mochi, despite the fact Sakura is most certainly not a cat, by any means.

Now, Sakura won’t sleep unless his best friend is beside him. His YouTube channel features tons of videos of the two snuggling together, playing, and enjoying each other’s company. But once it’s time to go to bed, they’re snuggled up together, making sure the other is safe.

Let us know what you think about this odd pair in the comments! Were you as surprised as we were to find out that despite their differences, these two adorable animals are the best of friends? Then be sure to pass this on to someone you think could use seeing two adorable animals show their love for one another.