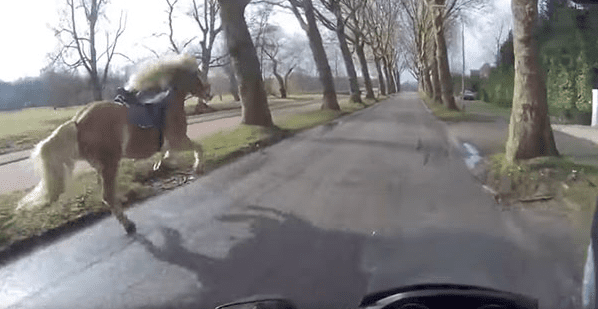 My commute to work is usually uneventful. I leave at the same time, walk to the same place, board the same bus and get off at the same destination. My nose is usually buried in a book, or I listlessly stare into the oblivion above the head of the person across from me on the subway. And I’ve been doing this routine for so long, that absolutely anything out of the ordinary – a spontaneous conversation with a stranger, or a musician playing Bob Marley on the accordion – is enough to jar me out of my early morning haze, and bring me back into my body! I am on autopilot every weekday morning!

So I can only imagine this man’s taste for adventure! He’s a modern-day James Bond and when the universe provided a mission for him, this adventurous soul took and ran with it – literally.

It was another morning commute for this Dutchman on a bike when from the corner of his eye, he saw a woman wearing bright green, running rather quickly with a look of distress on her face. He pulled over, they exchanged a few words, and off they went.

The story here is that the woman was out for a leisurely walk with her horse when she lost control of the reins, and the horse took off without warning. The woman was left with nothing more than her two feet and a heartbeat to keep up with a runaway horse, who she watched with sheer horror rip down the street and away into the far off distance.

That’s where this kind and brave motorcyclist appeared in the nick of time to scoop her up and go on one heck of a morning adventure through the beautiful Dutch countryside. This video is packed with speed, suspense, and is a must-watch from beginning to end!

Click below to catch all the action and see how it turns out!