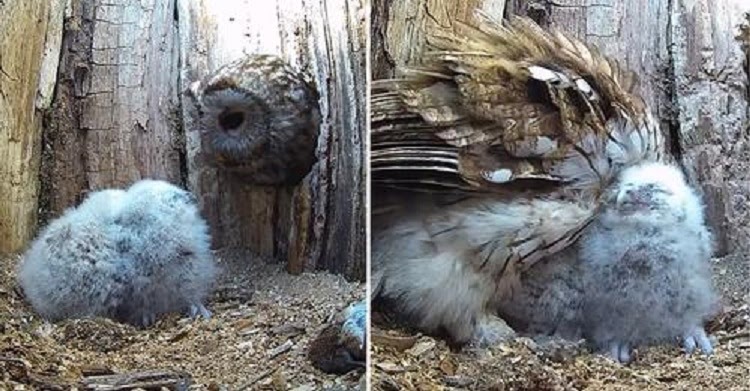 Many animals in nature have such strong maternal instincts that they’ll act as a mother to young ones, even if they’re not their biological children. Orphaned babies in need of a mother have been successfully paired with surrogate mothers, in a beautiful and mutually beneficial relationship. That was the case recently, after one childless owl was given two orphaned chicks to raise as her own, and she was thrilled to get to be a mother. Robert Fuller is a wildlife artist and photographer based in Thixendale, North Yorkshire, UK, who helps rehabilitate wildlife. Over the past two years, he’s seen Luna, a tawny owl, struggle to become a mother. Despite her best efforts, none of her offspring has survived. “Not only did her eggs fail to hatch this year, but she also lost her clutch last year,” Robert wrote.

However, a sweet opportunity soon presented itself. As Luna struggled to have children, two orphaned owl chicks were looking for a mom to care for them. The chicks were found on the ground in a local farm after falling to the floor. “Due to their young age, these owl chicks could perish of cold in a short space of time as at this age they should be constantly brooded by their parent,” Robert wrote.

So, Robert placed the baby owls in Luna’s nest, hoping she would care for them. “I regularly place orphaned or lost owlets into tawny owl nests and these birds accept the young chicks as their own,” Robert said. “Their urge to protect and nurture is strong.” The plan worked remarkably well: a heartwarming video shows the moment Luna finds the owl chicks in her nest, and she seems overjoyed to finally have children to mother.

After spotting the owl chicks, Luna doesn’t even hesitate for a moment before embracing them as her own, literally taking the orphaned chicks under her wing, as if cuddling them and keeping them safe. Robert wrote that “after a long wait,” Luna is “finally a mum.” In an update, Robert said that Luna was “doing a great job” raising the chicks, and has been “so tender” with them. He says it won’t be long until the chicks are too old to brood, but for now they’re in the safe care of their loving mom. “These owlets have now been living in their new nest for a week and are thriving under Luna’s tender care. It is wonderful to watch her brood the youngsters,” he wrote.

What a sweet story. A mother’s love is a powerful thing, and we’re so glad this mama owl finally got the family she’s always dreamed of, and these orphaned chicks found someone to care for them.