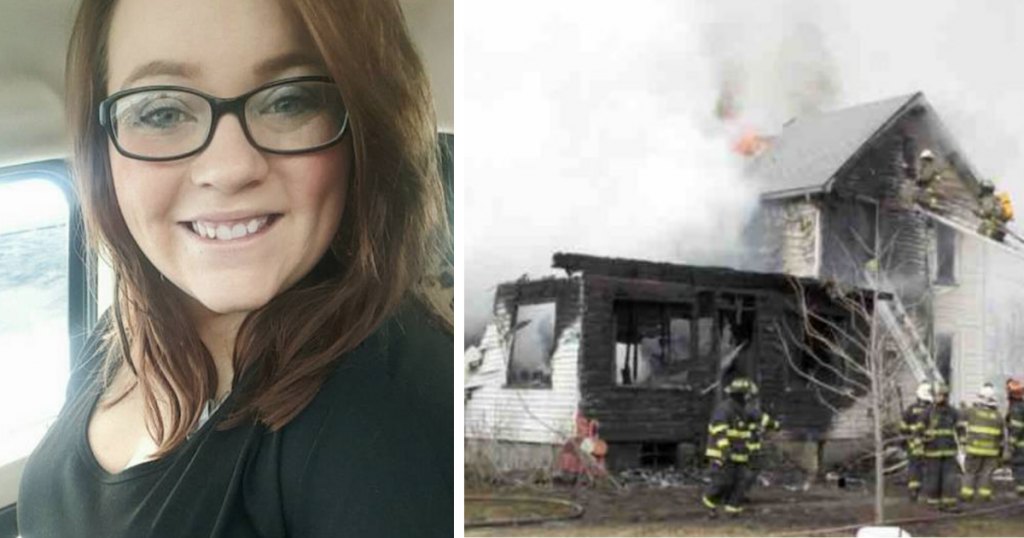 Nothing really beats mother’s love, don’t you think so? When a woman gives birth, her whole life changes and all that matters is the well-being of her bundle of joy. There is literally nothing a mom wouldn’t do for her child, and this sad and heartwarming story is just another proof of that.

Shelby Ann Carter, a 21-year-old woman from Wyoming, Ill, gave birth to a beautiful baby girl in January 2017. She and her boyfriend couldn’t be happier with the new addition to their family. Things just felt perfect for these new parents.

-Advertisment-
But you know what they say. Things don’t always turn out the way we want and expect. Sadly, the life of this loving family turned upside down as a result of a devastating tragedy.
On January 30, the mom and her baby were staying at Shelby’s mother’s house where they lived when suddenly the place caught fire.

The flames were spreading so quickly that the whole house got filled with heavy smoke and there was no way out.

Firefighters came to the scene as quickly as they could and did all in their power to put the flames under control, but unfortunately, it was already way too late for Shelby to be saved. She died due to carbon monoxide poisoning.

In the midst of the panic, Shelby tried to save her baby girl and everyone was left stunned when they realized what this mother did before she lost her life.

Once she realized it was impossible for them to get out of the house, Shelby put the baby into the car seat, made sure she was secured with the belts, and then dropped her from the second-floor window. This woman didn’t care for her own life as long as her daughter would survive. This is the sort of sacrifice only a mother can make.

The moment the firefighters spotted the little soul, they rushed her to the hospital, praying she didn’t suffer any serious injuries from the fall. Luckily, baby Keana was completely unscathed thanks to her mommy’s love and quick-thinking.

“It’s just incredible that she was able to pull her thoughts together to save her baby… I’d say it’s nothing short of a miracle the way it ended up”, Chief of the Wyoming-Speer Fire Protection District Ed Foglesonger told The Washington Post.

The loss of the young mother was a real tragedy that left the residents of Wyoming grieving. A baby was left without her mommy, and a family was broken forever.

Members of the community gathered to express their condolences and were willing to help Shelby’s family rebuild their house. After the word about the tragic and heartbreaking event spread, kind-hearted people helped raise almost $40,000 in just a few weeks.

We are deeply sorry for the loss and we feel sad Keana will never get the chance to meet her heroic mother who saved her life.