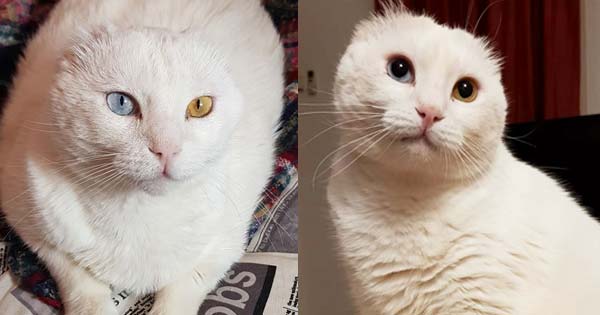 When Isabel went to an adoption event in April 2016 for Madrid Felina, an organization dedicated to helping homeless cats in and around Spain’s capital city, she was immediately drawn to Bowie, a white kitty who was missing both his ears and had one blue eye and one green eye, a congenital condition known as heterochromia.

“I fell in love with him from the beginning and I really wanted to see how he got along with my other cat Candy,” remembers Isabel. Bowie reminds me of Otitis, another little white cat with no ears.
The difference is Bowie has heterochromia- Otitis’s eyes are both blue.
Both are beautiful kitties, and are loved.