Man Reunites With Gorilla 5 Years Later In The Wild 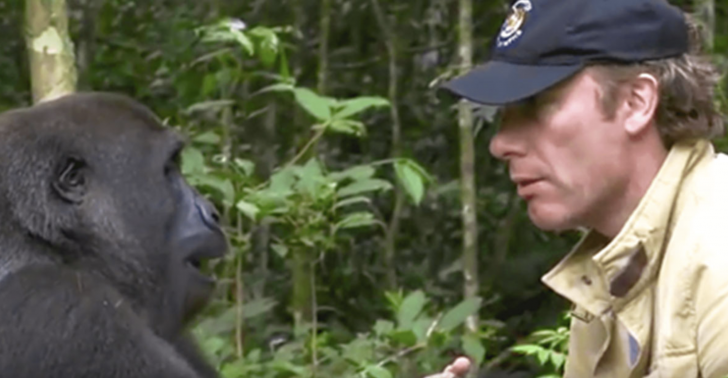 Reunions are absolutely beautiful. We often see, and hear stories, of people who reunite with their family and friends after years apart — they always leave us in tears. There are so many emotions flowing through the people, and even in the room amongst those watching, when you finally see someone coming together with a loved one, after being years apart.

Although reunions are more common among humans, I know we all have heard of stories in which humans are reuniting with their pets, or animals that they’ve helped raise in the past. Regardless of the reunion being between an animal and his/her human, even these are emotionally moving.

These humans can be their owners, former owners, or even more importantly those who may have rescued them from grave situations. One such story of a reunion is that of conservationist Damian Aspinall and Kwibi the gorilla. Everyone knows about Damian and the work that he has done for the wildlife. His efforts haven’t gone unnoticed. He is a hero in his own way.

Damian hasn’t seen Kwibi in over five years. His organization, The Aspinall Foundation, has been working to reintroduce captive gorillas back into the wild, for the last 1o years. Kwibi was raised by Damian at Howletts Wild Animal Park located in England. When Kwibi turned five, he was taken to the forest of Goban in West Africa and released. The goodbye was emotional but mandatory. No animal deserves to stay in captivity.

Now, five years later, Damian goes looking for Kwibi — he wants to meet him again. After traveling for several hours, searching for the gorilla, they finally find him, and the animal takes no time in recognizing his old friend. The moment this happens is heartwarming. You can instantly tell that gorillas have these human-like qualities and don’t forget people very quickly.

Damian knew the dangers this escapade can pose to him. But ignoring all the odds against him, the man sets out to see an old friend that he helped raise for five years and later helped release into the wild, where he truly belonged. Somewhere deep down inside, Damian knew he would be ok in Kwibi’s company.

Watch the amazing reunion below and tell us what you think about the gorilla’s reaction, in the comments below. If you enjoyed this video as much as we did, then please like and share it with family and friends, and help put a smile on their face!