Man Kisses Wife before Delivery, Not Knowing He Would Soon Be a Single Dad to Quadruplets 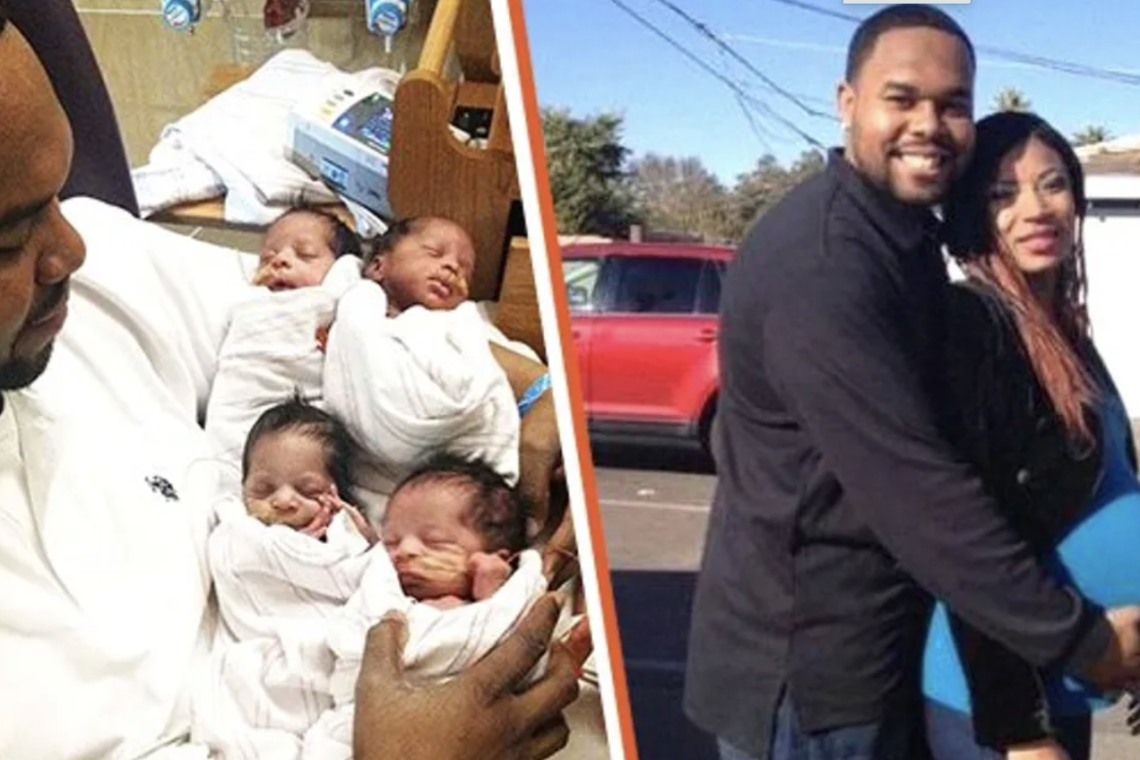 When a husband planted a sweet kiss on his wife’s head and told her he loved her before she went into labor, he wasn’t prepared for what was about to come. In a tragic twist of fate, the happiest moment of his life became a bittersweet reality.

Fairytale romance doesn’t necessarily exist in books and movies only. Sometimes, we might get lucky and experience our own real-life love story, and something similar happened to a lovely couple from Phoenix, Arizona.

The story of Carlos Morales and Erica Morales started in 2006 when their paths crossed at a nightclub in Scottsdale, Arizona. They were pretty different from each other, but fate had something extraordinary in store for them, much to their surprise.

The moment he set eyes on Erica, something tugged at his heart, and he couldn’t deny the instant connection he felt. According to Carlos, he didn’t speak English, and she didn’t speak Spanish, but he was determined to act as per his wishes.

Carlos seized the moment and asked Erica to dance without wasting any time. Luckily, she agreed, and the couple danced the night away. Before parting ways, the Arizona man scribbled his phone number on paper and gave it to the gorgeous lady.

However, Carlos later discovered that Erica had thrown the piece of paper out. One might think their story came to an unexpected halt that night, but it didn’t.

They met each other again through mutual friends, and this time, they didn’t part ways. Instead, they sparked a relationship and soon realized they had genuine feelings for each other.

Erica wanted her children to go to college, learn English and Spanish, and get good jobs, according to the note.
Carlos learned English, and Erica learned Spanish, and they also vowed to stay together for the rest of their lives. The couple married in Las Vegas in 2007. Soon afterward, they began trying for a baby in hopes of completing their family.

They experienced a miscarriage, but their sorrow became blissful when Erica fell pregnant after undergoing fertility treatment. When Erica went for her first sonogram, she discovered she was expecting not one but four babies.

The couple was super ecstatic to welcome quadruplets and embrace parenthood. To prevent Erica from taking undue stress, Carlos cared for her and handled the house chores, including cooking and cleaning.

The mom-to-be stayed healthy and fit throughout her pregnancy, but on January 12, 2015, she was taken to the hospital because of high blood pressure. On January 15, she texted her husband and said the doctors wanted to deliver the babies right away.

DECIDING ON THEIR CHILDREN’S NAMES

Carlos left his job and joined his wife in the hospital. The doctors told him his wife was having too many contractions, so it was best to deliver the babies immediately. The couple took pictures and made videos before Erica went into labor.

The couple also discussed names. They decided on “Carlos Jr.” for the boy and Tracey and Paisley for the girls. However, they couldn’t decide on the fourth baby’s name because they thought they would have ample time to figure it out.

In a sweet moment, Carlos kissed his wife on the head, told her he loved her, and said, “Let’s get these babies out.” He was hopeful that he and Erica would be holding their four bundles of joy and starting a new chapter of their lives in a few hours.

WELCOME TO THE WORLD, LITTLE ONES

On January 15, 2015, the then-36-year-old Erica delivered quadruplets — three girls and one boy, via C-section. Regarding the joyous moment, Carlos shared:

“We were so excited to start our family. And then it all came crashing down.”

But what was meant to be the happiest moment of their lives turned into a heartwrenching tragedy when Erica went into hypovolemic shock, an emergency condition characterized by severe blood and fluid loss, immediately after giving birth.

Carlos, who wasn’t even done relishing the joy of becoming a father of four kids, shared that he was sitting by his wife’s bedside when she squeezed his hand tightly. Then, he heard the alarms from the equipment surrounding her bed go off.

Shocked and confused, Carlos saw the medical staff rush into the room. He was then asked to leave and wait outside while they examined Erica. An hour later, the doctors told Carlos his wife was gone. The distraught husband was frozen in place. He recollected:

When Carlos sat by his babies in the middle of the night, the nurse asked him their names, and for a moment, he recalled his conversation with Erica. He gave the nurse the three names he and Erica had discussed: Carlos Jr., Paisley, and Tracey.

He chose the fourth name himself; Carlos decided to call his little girl “Erica.” The single father took two babies home from the hospital on January 16, 2015, while the remaining two joined him on March 11.

The grieving man often asked himself if he could have done something to save his beloved wife. He wondered how Erica would have felt if she had been around to see her children growing up.

The pain, trauma, and tragedy were unbearable, but he continued to stay strong for his kids. The widower also took baby-care sessions for his quadruplets. He learned how to bathe them, CPR, feed them, and manage their sleep schedules.

A friend of Carlos and Erica set up a GoFundMe page to help the single father with the financial costs of raising the kids alone. Carlos also had massive support from his friends and family as Erica’s mom, Sondra Bridges, moved in with him to care for the kids. Bridges expressed:

“It’s funny how things turn out. Bittersweet, but at the same time, thanks to God, and the outpouring support of the public, it’s been phenomenal. And I’d like to say thank you to each and every one of you. All the support we’ve gotten from you, we appreciate it.”

Carlos explained that he also stumbled upon a note Erica had written on her iPad. Erica wanted her children to go to college, learn English and Spanish, and get good jobs, according to the note.

The doting dad of four said he would try his best to ensure his late wife’s dream was fulfilled. In the face of unspeakable tragedy and loss, Carlos said he believed his wife was looking down on him and their kids, and he now had four little reasons to live.

Our heartfelt wishes go out to Carlos, his four adorable babies, and his entire family, and we hope he continues to stay strong for his children. Please share this story with your loved ones if you find it interesting.