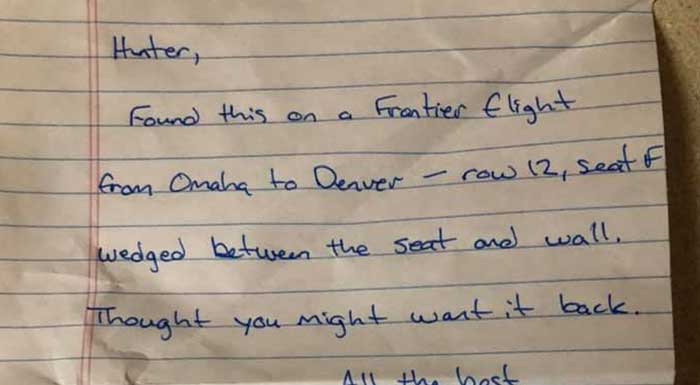 They say that even the tiniest acts of kindness can go a long way, and the good deed one stranger did for a young man who lost a valuable belonging went viral and reminded us that we should never lose our faith in humanity.

Hunter Shamatt, a 20-year-old man from Brandon, South Dakota, headed to Vegas to his sister’s wedding and was hoping to have the best time. He did have lots of fun, but one thing made him feel very worried at the same time. Namely, Hunter lost his wallet along with $60 cash, a paycheck on $400, his debit card, and his ID. He had to borrow money from his relatives in order to be able to spend a few days in Vegas.

Speaking to The Washington Post, Hunter, who works as a carpenter, said: “It kind of sucked. I was anxious not having my ID… It being Vegas and all, I figured it was gone forever.”

To his surprise, just after he somehow managed with the plane company to return home, Hunter got a package. Inside was his wallet and a note signed with initials only. It read:

“Hunter, found this on a Frontier flight from Omaha to Denver – row 12, seat F wedged between the seat and wall. Thought you might want it back. All the best. P.S. I rounded your cash up to an even $100 so you could celebrate getting your wallet back. Have Fun!!!” 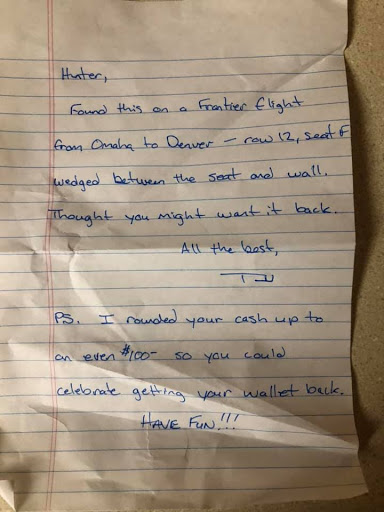 Wow! The man not only returned Hunter’s wallet, but he treated him with $40 as well.

Hunter’s mom, Janine, shared the note on her Facebook page, and they managed to track the good Samaritan down. It was a man named Todd Brown.

Hunter then sent a letter to Brown thanking him for his incredibly kind deed.

“Sir, I can’t thank you enough. What you’ve done for me is virtually unheard of.

Never in my life have I or my family witnessed such generosity. I never expected to see my wallet again, let alone with $40 more. Thank you so much, I’ve got student loans and a truck loan and it makes all the difference.”

What an uplifting story!