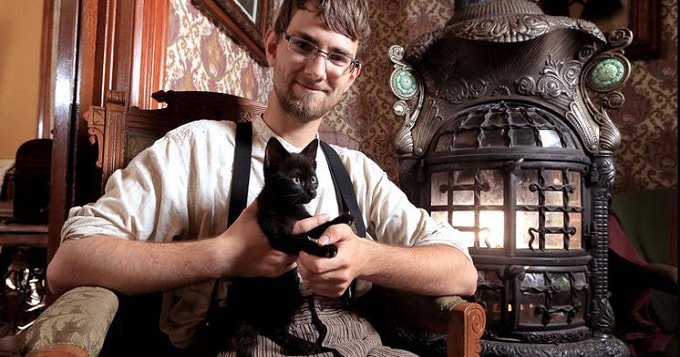 Susan Rosenbach traveled to Great Bend, Kan., for Memorial Day weekend to spend time with her family and friends. She saw her sister, spent time with her relatives, and paid her respects to her mother’s grave.

Rosenbach left for Nebraska at 10:30 a.m. on June 1 and arrived in Dannebrog around 4 p.m. after making a few stops.

It would have been a perfectly routine journey if Rosenbach hadn’t driven four hours back to Nebraska without realizing a kitty had stowed away beneath her car.

Rosenbach, a historical interpreter at the Stuhr Museum, returned to work on Wednesday morning. Until she arrived at the main door, everything about her commute appeared regular. When Bev Logue, who was working the gate that morning, heard meowing, she asked Rosenbach whether there was a cat in the car.

Rosenbach went out to explore, a little perplexed. She heard the meowing as well, but she didn’t have a cat with her. Rosenbach noticed the unfortunate feline was caught someplace in the underside of her car after checking around.

She went on to describe the matter and seek her coworkers for assistance during the museum’s morning meeting.

“The only plausible explanation is that the kitten escaped.”

Randy Dack, the blacksmith at the Stuhr Museum, and Ben Middendorf, the interpreter, offered to assist bring the cat out.

Middendorf explained, “We ended up having to pull down the spare tire.” “Randy stood beneath the car for approximately five minutes, coaxing him out with a can of food.”

Everyone who had assisted, according to Rosenbach, was relieved to see the cat out of the car and safe. Middendorf, on the other hand, showed a keen interest.

He phoned her in the days after that to make sure the cat was okay and adjusting to his new home in Nebraska. Rosenbach said she could see Middendorf was interested in adopting the cat and that she had a feeling he’d be a good fit.

He declared, “I’m a cat person.” “I’ve always wanted a cat, and a black cat in particular.” “It just fell into place.”

Middendorf was a fantastic match for the kitty in the end. His parents, on the other hand, were hesitant to bring a new pet to the household.

“My father isn’t a big fan of having a lot of pets, but I was able to persuade him,” he added with a smile.
Middendorf has only had the cat for a week, but claimed everything has gone smoothly thus far. The cat has settled in beautifully to his new home and has taken to his new name, Narknom.

In Robin McKinley’s fantasy novel “The Blue Sword,” the name Narknom is given to a hunting cat. Middendorf explained that his family names their pets after characters from their favorite literature, and Narknom was a wonderful choice for the cat.

Middendorf enjoys the kitten, but the family’s 14-year-old lab and other 12-year-old cat aren’t so fond of him.

“Neither of them is pleased with Narknom’s arrival,” he explained. “They’re used to being in charge.”

Middendorf will finish his studies at Concordia University and the cat will stay with his parents for the following two years. He intends to take Narknom to live with him after graduation. Middendorf clearly found the ideal companion, even if it was in an unusual way.

Rosenbach expressed her happiness that the cat got a home and that everything worked out in the end.

“It was truly a team effort,” she added. “I’m thankful to work with folks who are so compassionate and considerate.”