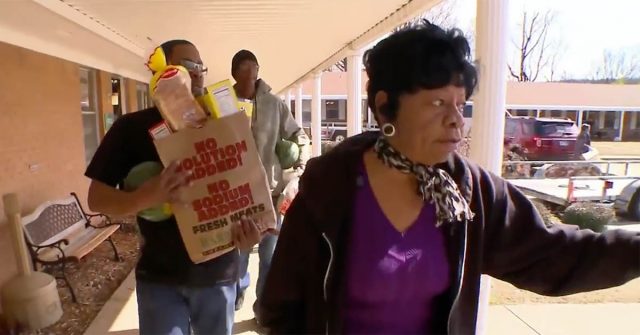 After retiring from working for 40 years as a nurse, Charolette Tidwell is using her pension to help feed more than 7,000 of her struggling neighbors each month.

Charolette has believed in being generous and of service to others since she was a little girl.

“The community that I was raised in did this. My mom did it. The folks at the church did it. The nuns at the school that I went to elementary school did it. We were mentored into this kind of work. Service was something that I’ve always been involved in,” she said.

After noticing many of her neighbors and people in her hometown of Fort Smith, Arkansas, struggle with food security, Charolette decided to create and run a food pantry. She works six days a week to keep it running, unpaid, and she personally buys all of the food, using her own pension to pay for it.

As a child growing up, Charolette knew the pain of regularly not having enough food to eat.

“I was raised in poverty and I understand all the issues that go along with not having enough money,” she said.

Charolette had seen seniors in her community who were unable to afford food, and who, at times, due to desperation and starvation, had resorted to finding and eating cat and dog food.

“Allowing the generation that raised us to go to the point that they’re eating cat food and dog food, I can’t imagine that,” she said. “I think [seniors are] a forgotten population.”

Charolette helps feed more than 7,000 people each and every month in her hometown of Fort Smith. Her group, Antioch for Youth and Family, hands out more than 500,000 meals each year to the hungry and to those living in poverty. The combination of factory closures and very low wages have increased poverty levels in Fort Smith, and Charolette’s help is deeply needed and appreciated.

“We thank the Lord for this lady here, Mrs. Tidwell, for helping us out in a time of need,” said Sherri W., one grateful client of the food pantry.

Charolette saves money herself by economizing on utility bills, and using coupons in order to get the best possible deal on food. Her frugal lifestyle allows her to get by herself and to donate everything else she has from her pension towards helping those struggling in her community.

Other kind souls have also donated towards her cause, and she has received a few small grants, which allow her to help even more. For Charolette, as long as her neighbors keep showing up for help, she is going to serve them, compassionately.

“I think if they have a persistence or purpose to come here, I have the obligation to serve them,” she said. “And to serve them in a compassionate, respectful way.”

Kind volunteers have also joined hands with Charolette, and they help her distribute the food, and hope, to the elderly.

“Many of our people are repeaters. They tell someone, and then those persons become repeaters. So it’s important for us to be not just a giver of food, but a giver of hope,” she said.

For Charolette, she doesn’t care about the money. Her heart is set on doing the highest good that she can for her neighbors, whom she loves.

If inspired, donations for Charolette’s food pantry, Antioch Youth and Family, can be made here.