Kind Homeless Man Gave His Last £3 So College Student Could Get Home; She After Raised £46,000 For Him 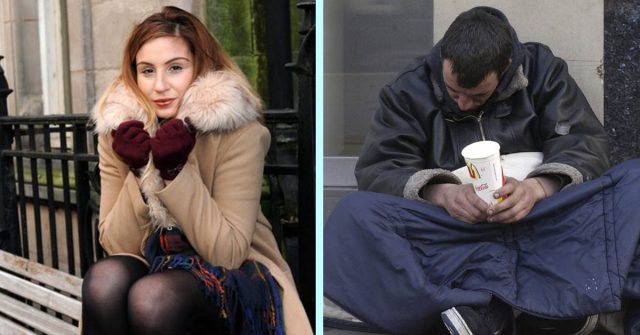 When 22-year-old Dominique Harrison-Bentzen lost her bank card after a night out, she had no idea how she was going to get home. A nearby homeless man named Robbie could see her searching for her card and was concerned for her because it was so late at night. He approached Dominique and offered her his last £3 so that she could get home safely.

“On Wednesday an incredible thing happened…” Dominique wrote online. “After losing my bank card and having no money in the early hours, a homeless man approached me with his only change of £3 and insisted I took it to pay for a taxi to make sure I got home safe.”

“I didn’t take the money but I was touched by such a kind gesture from a man who faces ignorance every day.”

The homeless man’s act of kindness stayed in Dominique’s mind and heart the following week, and she decided to try and find him again so that she could somehow repay his kindness. While searching and asking if others had seen him, she learned that Robbie is regularly very kind to people in their community.

“I set on a mission to find this man,” Dominique explained. “The more I spoke about him, the more kind gestures I learned about, such as him returning wallets untouched to pedestrians and offering his scarf to keep people warm.”

Dominique eventually found the kind homeless man and was able to thank him, and she learned about his situation.

“I was lucky enough to find him again and his name is Robbie, he has been homeless for 7 months through no fault of his own and needs to get back on his feet but cannot get work due to having no address… I decided [to] help him, as he has helped many others,” Dominique wrote.

Dominique wanted to help Robbie find safe housing so she setup a donation page and shared her story about being helped by Robbie online with her friends, asking for a £3 donation in order to help him get off the streets. While her goal was to raise around £500 to rent a room in a house, thousands of people online were touched by how kind Robbie had been to Dominique. Thousands donated and she ended up raising £46,231 for Robbie, the equivalent of around $56,000.

Dominique told Robbie how many people appreciated his kindness and how much money had been raised to help him. Robbie decided to give the money to a charity which could provide him with housing and then could use the excess funds to help other homeless people in their community who were in his same situation.

“As Robbie agrees, there are many, many inspiring individuals within the homeless community. We set out originally to change 1 man’s life, now we can change dozens if not more, surely this is absolutely incredible?” Dominique wrote.

“The funds have been passed on to The Foxton Centre, a local homeless organization within Preston with a huge record of success. It has been agreed that the money will be used as intended to rehome as many people as possible in Robbie’s situation, of course along with Robbie who will have access to help and support.”

Robbie’s kind heart not only inspired a college student who had just lost her bank card, but he has inspired thousands around the world, and now he has a safe and permanent place to call home. When you give kindness, it truly does come back to you.