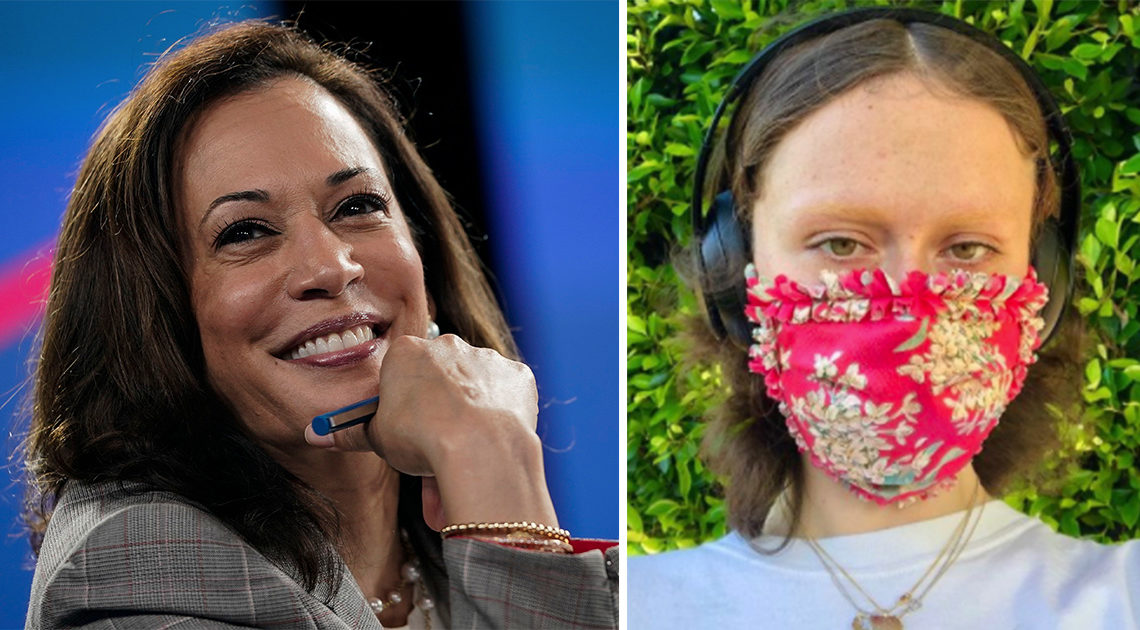 Kamala Harris was recently sworn in as the new Vice President of the United States. Of course, besides her many great features as a leader and prosecutor, she’s also known for her mesmerizing pearls and dresses.

However, it seems that another “fashion guru” will be calling the White House home in Harris’s stepdaughter, Ella Emhoff.

Daughter to Second Husband Doug Emhoff, Ella has taken a different road in life rather than head into politics. She knits her own clothes, and was recently signed as a model.

Just from looking at pictures of her, it’s easy to say that she is a true beauty!

Kamala Harris has been vice president for about a month. During that time, she and President Joe Biden have started working on what they believe is the right way to move forward. They’ve already started to reverse or change many of Donald Trump’s reforms and policies.

Harris herself has had a successful career as both a prosecutor and a politician. In the process, she was also able to find the love of her life. Meeting Doug Emhoff didn’t only bring her a wonderful husband, but she also got a great friend in his ex-wife Kerstin Mackin, as well as two lovely stepchildren, Cole and Ella.

Ella Emhoff turned 21 last year, and as of now, she probably won’t be staying at the White House with her father. She’s pursuing her own path in life, and lives in Brooklyn, New York. Recently, she signed her first modelling contract.

So who is Ella Emhoff? And how big of a part did she play in Kamala Harris coming into her family? This is all you need to know!

But first, let’s take a quick recap with regards what actually brought Ella and Kamala Harris’ lives together.

In 2014, the vice president married husband Doug Emhoff, who also made history last month by becoming the first Second Gentleman in U.S. history.

Father Doug Emhoff – Second Gentleman
Ella’s father Doug was born October 13, 1964, in Brooklyn, New York. He was raised in Matawan, New Jersey, by parents Mike and Barbara, and grew up alongside his siblings, Jamie and Andy.

According to his sister, he was always drawn to the law.

“He liked the idea that it was sticking up for people,” she said. “And he could always win an argument.”

Doug Emhoff went on to earn a B.A. from California State University, Northridge. In 1990, he also earned a J.D. from University of Southern California.

Just like his future wife, Kamala Harris, Emhoff went on to work in the legal field. He became an associate at Pillsbury Winthrop Shaw Pittman, and later at Bingham McCutchen.

Towards the end of the decade, Doug had transitioned from young attorney to partner – before long, he stared to work with entertainment law in Hollywood.

First marriage & children
By this point, Doug had met and wed his first wife, film producer Kerstin Mackin. The couple tied the knot in 1992, and then welcomed son Cole and daughter Ella.

They would divorce 16 years later, but Kerstin still plays an important role in the family. She is, of course, the mother of Cole and Ella, and also a great friend to Kamala Harris.

Kerstin Mackin was actually in attendance on inauguration day. In a 2019 Elle article, Harris wrote that she and Kerstin “are dear friends”. She continued: “our modern family is almost a little too functional”.

“They are my endless source of love and pure joy. I am so thankful to Doug, to Kerstin, and most of all, to Ella and Cole,” Kamala wrote.

“And as our family embarks together on this new journey—one that has taken me to South Carolina, Iowa, New Hampshire, Ohio, Nevada, and Michigan in the last few weeks alone—I can say one thing with certainty, my heart wouldn’t be whole, nor my life full, without them.”

“She and I became a duo of cheerleaders in the bleachers at Ella’s swim meets and basketball games, often to Ella’s embarrassment. We sometimes joke that our modern family is almost a little too functional,” Harris added.

Relationship with Kamala Harris
For Cole and Ella, this makes everything so much easier. They enjoy their mother and step-mother having a great relationship.

“The level of parenting between the three of them is very different now that we’re both in our 20s and are kind of able to make decisions,” Ella told The New York Times.

“So with hair and tattoos and things like that, I think they’re all in the realm of like, ‘I don’t understand it, but I want you to be who you want to be.’ They have good communication between the three of them. They are really a unit, like a three-person parenting squad. It’s really cool.”

To everyone else, Kamala will now be known as “madam vice president.” To Cole and Ella Emhoff, though, she’s “Momala.”

“To my brother and me, you’ll always be Momala,” Emhoff said last August, during an appearance at the Democratic National Convention.

Their father, Doug Emhoff, spent most of his childhood in Brooklyn, New York.

Who is Ella Emhoff?
Both Cole and Ella grew up in California, attending the Wildwood High School in Los Angeles. Ella loves sports, so she played basketball and was on the swimming team.

It was around this time that their father Doug was set up on a blind date with Kamala Harris. It all went well, though at first the future-vice president didn’t want to meet her new boyfriend’s children. As per reports, she didn’t want to jump into a child’s life and then disappear if things didn’t work out.

In the end, it was pretty much Ella and Cole who convinced Kamala that Doug Emhoff was truly the one.

“I was already hooked on Doug, but I believe it was Cole and Ella who reeled me in,” Harris wrote in Elle.

After Kamala Harris became a U.S senator in 2017, the commute to Los Angeles was way too long. As a result, she missed Ella’s high school graduation, which she felt really bad about.

“I agonized over the scheduling conflict,” Harris wrote, adding that Ella understood that she couldn’t make it and that they celebrated at a later occasion.

Cole and Ella’s mother, Kerstin Mackin, works as a film producer, and Cole has decided to follow his mum into show business.

He works as an executive assistant for production company Plan B Entertainment, which was actually founded by Brad Pitt and Jennifer Aniston.

Ella Emhoff – fashion
Ella Emhoff however, decided on a whole different path. The 21-year-old moved to New York and is pursuing a career in fashion.

Ella Emhoff has been dubbed “The First Daughter of Bushwick”. The trendy neighborhood, in Brooklyn, New York, is also where she lives, focusing on her own craft. She’s known around town for her DIY knitting, as well as sticker tattoos.

“I’ve also started tattooing myself a lot,” Ella said in an interview with Garage. “I did the classic: I did my dog’s name, and I did a little flower. [Then] I recently did my first big boy: a salmon fish with a flower hanging out of its mouth.”

“It’s super fun. I don’t think it’s something I would ever want to pursue professionally, but it’s fun to just do it to yourself or do it to a friend. And if you can do it, definitely go for it.”

The White House will probably now get its own little share of Ella since Kamala and Doug have moved in. For her part, Ella would surely love to be on the scene.

“I guess there is kind of some anticipation about what we’re going to put out there in terms of fashion,” Ella told Vogue, referring to her new family living in the White House and their families.

“Amongst Dr. Biden and Kamala and Meena [Harris] and me, I guess there is kind of some anticipation about what we’re going to put out there in terms of fashion. Maybe that’s because we’re all women, or maybe it’s because we’ve had big outfits in the past, but I think people are definitely going to be paying more attention.”

The inauguration dress
On Ella’s Instagram page – which in a week went from 50,000 followers to almost 400,000 – she regularly shows off her knitting creations, as well as takes commissions for crocheted bucket hats, cardigans, basketball shorts, among other things.

In the beginning of January, she got to see her stepmother sworn in as the vice president. And just like Kamala Harris – whose outfit had a very special meaning – Ella Emhoff had a special dress. It was designed by Batsheva Hay, and the result was amazing.

Hay had apparently heard about Ella Emhoff before – and to design her dress was like a dream come true.

“Kamala’s stepdaughter is so cool, you have to check out her work. I never thought she’d know who I was, but my friend was like, ‘You should definitely shoot her,’” Hay recalled.

“Then, all of a sudden, this came up, and we followed each other, and I went down the rabbit hole of seeing all of Ella’s knitwear. I was literally trying to buy stuff, and it was all sold out! I became obsessed, and was like, what do I have for her? How can we make this happen?”

Signed to a modeling contract
Emhoff, who is named after jazz singer Ella Fitzgerald, is currently studying fine arts at Parsons School of Design in New York, where she specializes in textiles. She is set to graduate later in 2021.

Ella’s also pursuing her own career in fashion with textiles. As of recently, though, she can also put being a model on her resume. Earlier this year, she was signed to IMG.

Ella Emhoff wasn’t the only one from the inauguration to sign with the big talent agency. Amanda Gorman – whose performance of her poem The Hill We Climb during Joe Biden’s presidential inauguration was praised all over the world – has also signed with IMG.

“Very proud mama”
Emhoff told The Times that her family was initially a bit hesitant towards her signing the IMG contract because the were “a little protective” of her. However, she says that this platform will be a great way to do more knitwear fundraisers for causes that are close to her heart.

“Very proud (but nervous) MAMA! Ella will stay true to her cheeky self with all of our support,” her mother Kerstin Mackin tweeted after Ella was signed.

Ella Emhoff has pursued her own career and wow, does she look great! She’s a true beauty, and we’re sure that she’ll be a great model as well. We wish her all the best of luck!