Jaguar Snatches Anaconda Out of River 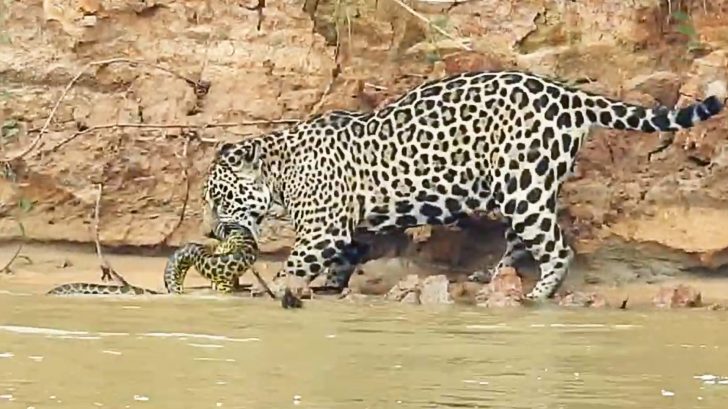 It was an apex predator showdown on the banks of the Pantanal, as a jaguar fights to take down the region’s most formidable snake.
The prey is an anaconda: a heavy-duty, muscular constrictor built to take down animals by squeezing them to death. This particular anaconda may look small, but these tenacious snakes — even at this size — are forces to be reckoned with.

The snake put up a good fight, but in the end the jaguar was able to overpower the constrictor. The big cat was rewarded with a sizable meal for its efforts.

Spotting a jaguar hunting in the wild is a treat in itself; seeing one wrestle an anaconda — and capturing it on camera — is a once-in-a-lifetime thrill. In many regions, jaguar populations are decreasing and sightings are becoming less and less common. Poaching, poisoning, and habitat loss are to blame.

These two top predators coexist in the Pantanal, the largest tropical wetland on the planet spanning an estimated 75,000 square miles across Brazil, Bolivia, and Paraguay. The region is a biodiversity hotspot and host to one of the world’s most robust jaguar populations, making it one of the best places to spot the big cats. Giant otters, cabybaras (the world’s largest rodent), ocelots, giant anteaters, and the biggest parrot on Earth also call this unique place home.