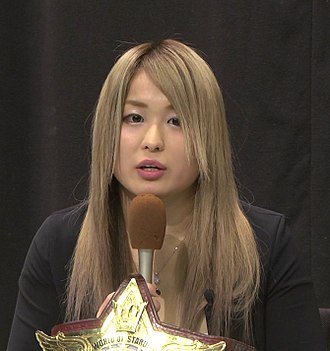 Masami Odate (大館正美, Ōdate Masami, born May 8, 1990)[1][2][5] is a Japanese professional wrestler, better known by the ring name Io Shirai (紫雷 イオ, Shirai Io) (/ˈiːoʊ/ EE-oh). She is currently signed to WWE and performs on the NXT brand, where she is a former NXT Women’s Champion and a former NXT Women’s Tag Team Champion.

– Advertisement –
Making her debut in March 2007, she spent several years working as a tag team wrestler, teaming with her older sister Mio, with whom she would wrestle for various promotions across Japan and Mexico, winning the TLW World Young Women’s Tag Team Championship in the process. In June 2010, she and her sister came together with Kana to form the Triple Tails stable, which would last for 15 months, before Io broke out of the group and embarked on her singles career in Stardom. Io quickly became one of the promotion’s top stars, and in April 2013, she won the promotion’s top title, the World of Stardom Championship, which she would hold twice, with each reign lasting for over a year. She worked for Stardom from 2011 until 2018, when she signed with WWE.