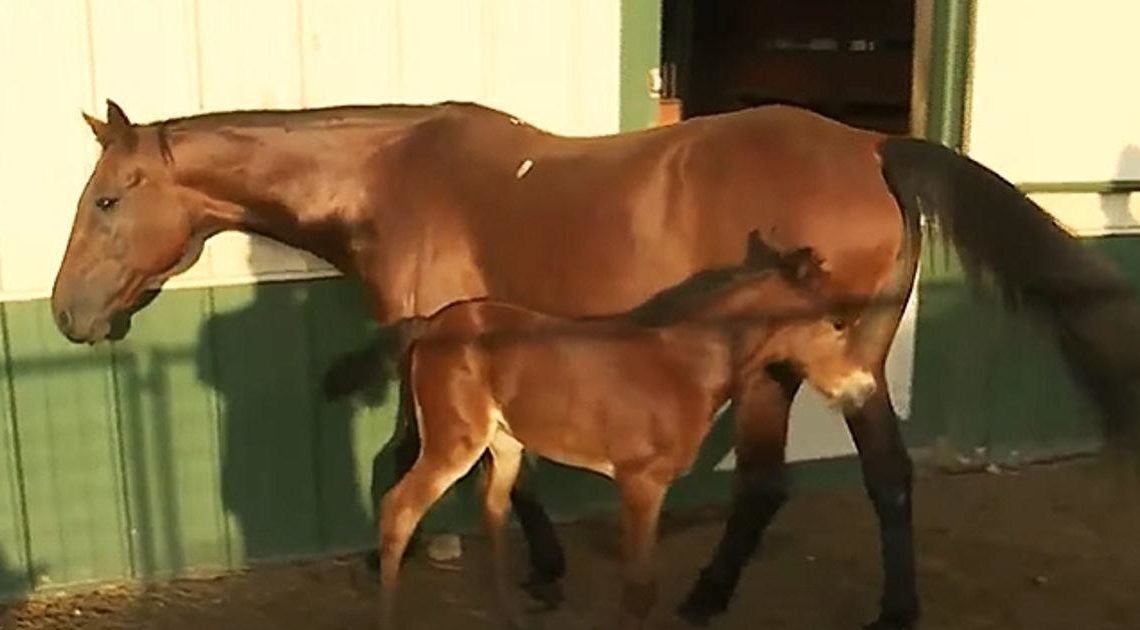 A horse by the name of Journey has had quite a life journey so far. She has also been met with plenty of obstacles and challenges but has managed to overcome them all. Back in October 2020, she was one of the horses involved in a tragic tractor-trailer accident on a highway in Washington, Missouri. The horses had put on the vehicle in the middle of the night to be transported hundreds of miles away to a slaughterhouse.

A total of 15 out of the 29 horses survived the accident, with 11 of them going directly to the Longmeadow Rescue Ranch in Union, Missouri. Fortunately, all but one were kept safe and healthy at the ranch, as one horse had been suffering so much that veterinarians determined it was best to humanely euthanize the animal.

Although the road to recovery has been challenging at times, it has also been full of some wonderful surprises. After long days and nights full of tending to the horses and making sure they were properly cared for, workers on the rescue ranch were surprised to discover that there would soon be a new addition to the crew. They had discovered that Journey, one of the surviving horses, was pregnant.

After receiving the care and treatments she needed, Journey was strong and healthy enough to deliver a beautiful baby boy. The colt’s birth has been considered a miracle due to the detrimental circumstances his mother almost faced back in mid-October 2020 and the fact that he was born perfectly healthy.

A Second Chance At Life

According to the Longmeadow Rescue Ranch, Journey was one of the surviving horses of the horrific tractor-trailer accident that occurred on Oct. 18, 2020. The horses were on the trailer, being transported to a slaughterhouse before the accident occurred. The rescue ranch explained that Journey only suffered minimal injuries but had sustained abrasions in several areas on her front right leg that made it painful for her to walk.

On top of that, she was also extremely underweight, which could have been detrimental to her and her colt’s health, as she was pregnant at the time. After undergoing an ultrasound, veterinarians were able to determine that her baby appeared to be healthy.

The Longmeadow Rescue Ranch reported that Journey gave birth to a colt in the early morning of Aug. 16, 2021, and that “the mother and baby have bonded perfectly.” Journey has also shown an immense amount of love and care toward her baby boy named Cruiser. Longmeadow reported that the birth went “smoothly for both of them, and they appear to be doing very well.” Fox 2 called the colt’s birth a “miracle” considering what almost happened to his mother in October 2020.

“Journey has really been given a second chance at a happier life here at Longmeadow and I think this new baby really symbolizes that,” Longmeadow Rescue Ranch director Amanda Mullen said. “It’s wonderful to know that something good could come from that tragedy.” Longmeadow reported that both Journey and her colt will be adaptable in about eight months, while plenty of other farm animals on the ranch are currently available for adoption.

What did you think about this emotional story? Let us know, and be sure to pass this along to your family members and friends to find out what they think, too!