Horse Defends Himself Against Wolves By Rolling Around In The Snow 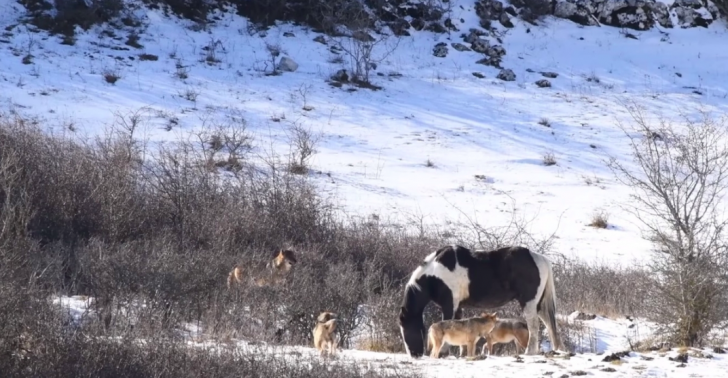 We have all heard the phrase “hungry like a wolf,” and it exists for a very good reason. These wild pups don’t want to be messed with and will hunt you down like their life depends on it (and it kind of does). Generally, from a human’s standpoint, being surrounded by a pack of wolves is not the ideal situation. I mean, the idea of becoming a group of wild animals’ next prey is a stomach-turning thought, to say the least.

One not-so-lucky horse found himself accompanied by a wolf pack one snowy, winter day. The video recording the daunting situation had both onlookers’ and watchers’ hearts pounding in fear, knowing just what would happen next. The horse would surely become a meal, right?

As the video proceeds, we either expect the latter or that the horse would provide some intense and shocking form of self-defense. With one innocent animal and multiple threatening wolves, the fate, however, would likely not be very pretty.

There comes a point in the video where one is expecting a climax, something, just something that would indicate a horse versus wolf pack battle. However, there was no battle at all.

The horse provides the ultimate way to deter the angry wolves. No, it doesn’t stomp around, flee the scene, play dead, or in any way offer a threatening exterior towards the pack; the horse opts for an odd but successful way to show the wolves that it is not the best option for prey after all.

The best part is, the horse’s reaction will surely have you cracking up.

Watch the video below to view the horse’s hilarious method of self-defense in response to the wolf pack! It is something you never would expect. Let’s just say the horse certainly has a way with dealing with pressure on the spot!