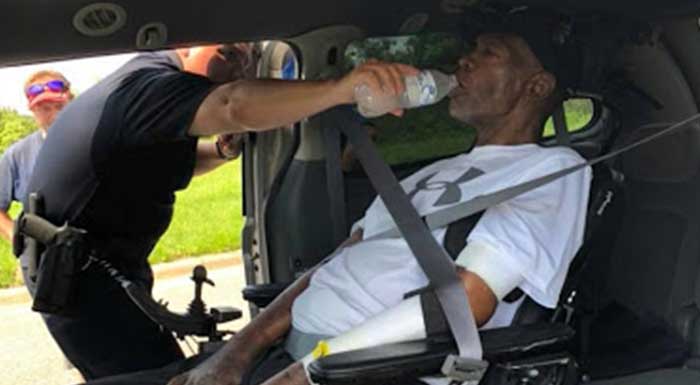 The rise of social media may be responsible for broadcasting plenty of things we’d rather not see, but it also sheds light on acts of love and compassion that would otherwise go unnoticed.

Transparency is king when it comes to social media sites, and as such it can take everyday stories of kindness and turn them into viral phenomenons.

Such was the case with Erica Melton from Prattville, Alabama, whose post concerning a certain police officer has taken the net by storm. She wanted people to know the truth about officers in her home town, and we’d say she’s been successful in her objective…

Erica Melton lives in Prattville, Alabama, with her quadriplegic husband Douglas. She usually posts sparingly about the ongoings on their personal life, but when she had a run-in with the Prattville Police Department, she knew she had to share what had happened.

When their van broke down, the couple had a problem to solve. It was an extremely hot day, and with Douglas sat in his wheelchair, buckled inside the vehicle, Erica knew they had to get help.

An officer happened to be passing, and so Erica flagged him down. It turned out to be Pratville police Sgt. T.R. Hope who responded, his subsequent actions leaving a lasting impression indeed.

She posted the story to Facebook, where it received plenty of traction for being a feel-good tale of human kindness and an officer going above and beyond what was required.

”I don’t usually make post on fb especially concerning my husband or his current condition but I feel the need to let people know what kind of people we have among us. Our van stopped on us again today and we were in traffic I flagged for an officer he stopped and called for another one to assist him the officers not only pushed our van out of traffic but made sure we were ok officer Hope stayed with us went and got water other Good Samaritans stopped with water took me to get lunch and we were also blessed us with other gifts.

We are truly blessed to have such good people among us to come to our aid when we are in need. This showed me unity in our community and we need more of it.

I want to give a special thanks to the first responding officer, officer Hope, (PPD) the gentleman that was so giving and encouraging from his church (Glenwood on McQueen Smith), the technician from Brewbaker motor Hope the service manager at Brewbaker, the tow truck driver, the young lady that stopped with water, Angie the van driver that picked us up and transported us home, and most of all Thank you God for allowing your people to accommodate and demonstrate what we all should be.”

Not only did Sgt. Hope help push their van to safety, but he also insisted on remaining with Erica and Douglas until a tow truck arrived.

As they waited, Hope ensured the couple had liquids to keep them hydrated, going as far as to give Douglas water himself. Erica was so moved by the scene that she wanted to spread word of his compassionate actions far and wide.

Hope himself, however, was quick to downplay any praise set at his door.

“I didn’t do anything different than any other Prattville police officer would have done,” he said.

Erica disagreed, insisting that in her eyes Sgt. Hope had done more than his expected duty.

She continued: “I hope it teaches everyone that we must remain unified to help,” Erica said. “No matter who it is.”

What a lovely story of a police officer going above and beyond in order to help members of his community. In a time when the integrity of the force can so often be called into question, it warms the heart to know there are still truly caring officers out there.

If you liked this story, share the article to help spread Erica’s story further. Let’s get Sgt. Hope the praise and recognition he deserves!